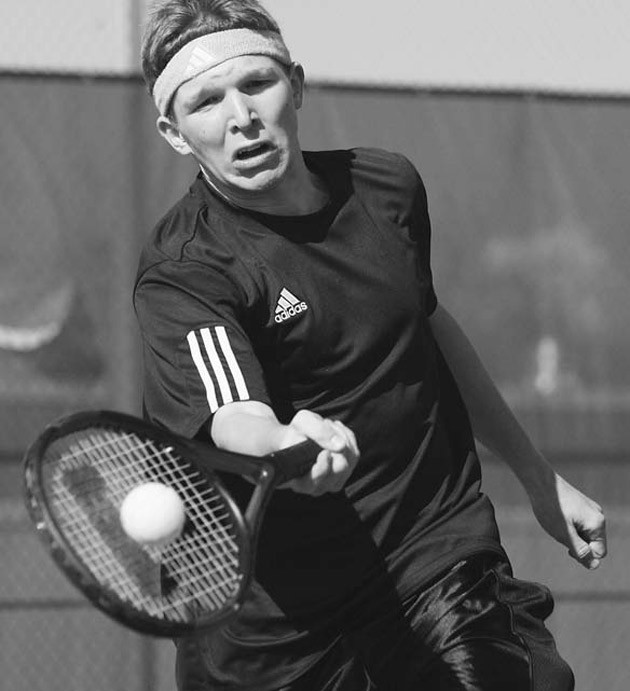 Tooele’s Josh Snow competes in an earlier match this spring. The Buffs tied for fourth place in the Region 11 Boys Tennis tournament Tuesday and Wednesday at Ogden High. photography/Troy Boman

The Tooele High boys tennis team was looking for improvement during the 2005 net campaign.

A year ago, the Buffs sent three players to the Class 3A State boys tennis tournament.

But with a strict summer regimen and dedication in the off-season, Tooele was hoping for more.

And on Wednesday, the Buffs were rewarded for their commitment and devotion to the sport.

Tooele had six of seven players earn state berths, the most ever in the history of the program.

Tooele placed fourth in all four divisions and will meet the Region 10 first seeds in the opening round of the state tournament May 13-14 at Brigham Young University.

Ogden claimed the team title with 40 team points in duels and tourney points while Grantsville finished in second with 34 and Morgan in third at 31. Tooele and Bear River tied for fourth place with 12 points each and Ben Lomond brought up the rear with one point and in sixth place overall.

The Buffs also posted one of the best-ever dual records with an 8-6 overall dual record and the Buffs finished with a 2-3 region record on the season.

Tooele Coach Derek Smith said he was pleased with his team’s overall accomplishments. “We played hard and played our best,” he noted. “Overall, I’m pretty encouraged with what the boys were able to do. Greg played some of the best tennis I’ve ever seen him play. And we finally found the right doubles combinations and they worked very well together and played strong. Cody did his best and dug deep in his matches and just fell a little short in a couple of points. Now we just have to prepare for state and tune the next two weeks. I’m proud of them.

They won the crucial matches, early (Wednesday), but fell just a little short in the second match (Wednesday).”

Individual results on the region tourney will be published in Tuesday’s edition.

The Tigers rolled to a league triumph over the Buffs in a makeup match Friday at Ogden.

In exhibition action, Russell Johnson earned a singles win while the Buff duo of Dylan King and Austin Jasper claimed a doubles victory.

The Buffs registered a nonleague whitewash of the Rabbits in a preseason match March 30 at Delta.

Auxier and Snow combined forces to record a 6-0, 6-0 whitewash of Delta duo Tyler Hardy and Brandon Kunz at first doubles.

The Buff tandem of Tillman and Farley also cruised to a 6-1, 6-0 triumph over Rabbit combo Scott Hill and John Stanworth at second doubles.

Coach Smith said the Buff squad turned in an impressive performance against the Rabbits.

“We played quite well,” he stated. “The matches were actually closer than the final scores indicated, especially in the singles. Two of the three matches were three setters. But we came out a little cold like, the weather, but we turned it around and pulled off the victory, which is exciting for me to see. I now know that when they are down they have the ability to turn a match around. We have a good group of kids that never quit and give it their all. I want to acknowledge my assistant coach Spencer Smith and how much he’s helped our program. He has really helped the team morale and put a positive note on the season and in our program.”