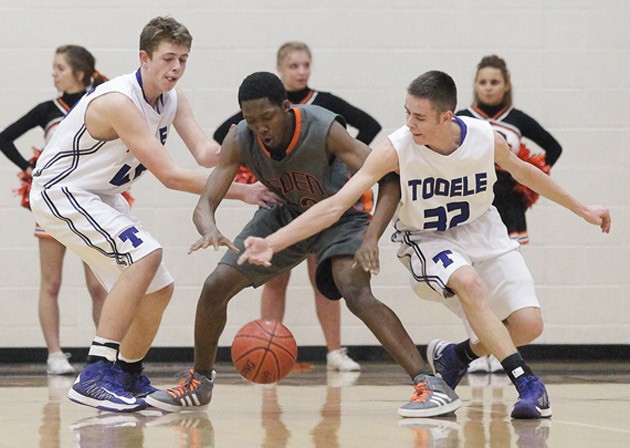 Ogden outscored Tooele 13-1 in the final 4 minutes of the first quarter and kept pouring it on to defeat the Buffaloes 73-43 Wednesday night in Tooele.

Prospects for a trip to the state playoffs are growing dimmer for the Buffaloes who dropped to 0-5 in Region 11 games with seven games remaining. The last two region losses were shellackings, but Tooele was in region games against Ben Lomond, Grantsville and Stansbury, so if they can turn things around quickly a playoff spot is still a possibility.

Tooele coach Shawn Faux is still searching for the right combination of players to ignite the squad to more victories. Seventeen players were on the Tooele bench for the varsity game against Ogden and about 11 saw action, including four freshmen in Ace Hymas, Connor Searle, Ryan Brady and Isaac Montegue.

“I’ve been pleased all season with the way our freshmen have played in games. They love playing, and they play hard,” said coach Faux. “We need to stay positive, and one of the positive things is the play of our younger players. In all the games they’ve played this year they’ve played with intensity and with the right attitude.”

Tooele netted its first 5 points from Tyler Woodruff who was the beneficiary of assists from Justin Pollmann. The Buffaloes trailed 8-5 with 4:15 left in the first quarter. Then they got sloppy, failing to block out on the offensive boards and giving up numerous steals to a pressing Ogden defense. The Tigers led 21-6 after the first quarter.

The Buffaloes trailed by 15 early in the second half when the Tigers went on an 8-2 run to push the lead to 21. Ten Tooele players saw the floor in the first half and Ogden eventually led by 25 points at 39-14 just before intermission. Tooele sliced into that huge lead when Andrew Spendlove deflected the ball into the hands of Pollmann who scored on a layup and was fouled. Pollmann hit the foul shot and Tooele trailed 39-17 at intermission.

Tooele looked strong to start the second half and cut the lead under 20 on a basket from Woodruff on a fastbreak, a nifty baseline move for a score by Pollmann and an inside bucket from Aaron Tippets.

With another 3-point basket to start the fourth quarter, Ogden had blown the game wide open and led 67-30.

Tooele then outscored Ogden 13-6 to close out the game and won the fourth quarter 14-9. During the run, Pollmann scored 7 straight points with a baseline drive for a basket, a 3-pointer, and then a steal followed by a dunk. The junior forward ended up with 19 points, senior Woodruff scored 11 and Hymas added 5. Tippetts, Searle, Brady and Tyler Lawrence each scored 2 points.