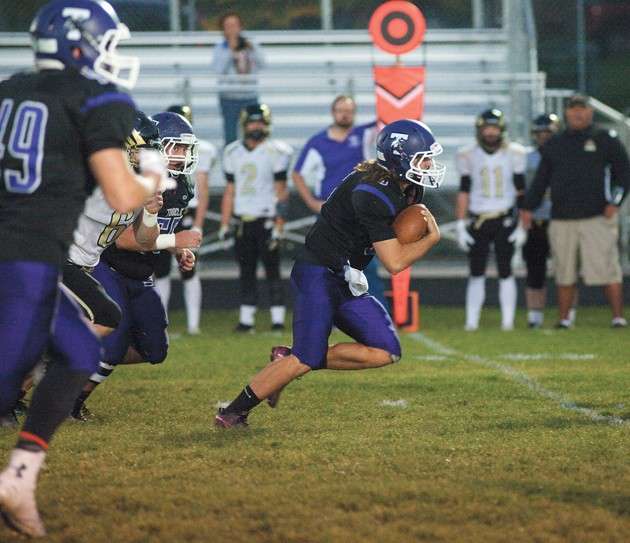 Tooele quarterback Jake Brady breaks through the Desert Hills defense in the first quarter of last week’s loss. Brady had three scores as the Buffs loaded up 406 rushing yards in Wednesday’s win over Uintah on the road.

Taking the early Uintah turnovers Wednesday, Tooele football used those gifts and had their way on offense all night in Vernal. The Buffaloes moved their offense at will and cruised to a 54-27 victory over Uintah to stop a three-game losing streak.

Tooele racked up 406 yards on the ground as the offensive line for the Buffaloes did their job to perfection. Fullback Nate Reynolds led Tooele with 154 yards on the ground with a touchdown. Quarterback Jake Brady scored three times from close range to help Tooele cruise to victory.

UIntah tried a trick play on their very first play and it didn’t work out too well as they fumbled the ball right to Tooele and the Buffaloes took advantage. Two plays later, Jake Brady finished off the 15-yard drive with a 1-yard touchdown run on a quarterback sneak for a 7-0 lead.

Another Uintah fumble gave Tooele a short field again on offense. This time it only took one play for the Buffaloes to score as Jake Brady found Ty Allred for a 26-yard touchdown pass and a 13-0 lead with 10:50 left in the opening quarter.

On their third possession, Tooele actually had the ball on their own end of the field, but that didn’t stop them from completing another scoring drive. Running back Ryan Brady, Reynolds and running back Stratton Atherley had rushes of 13, 23 and 14 respectively to get Tooele close. Reynolds finished off the drive with a 23-yard touchdown run up the middle for a 19-0 lead with 4:34 left in the first quarter.

A fumble caused Tooele to go a drive without points but that would be a rarity for the Buffaloes. On their next possession, Tooele got a rush from Reynolds for 10 yards and Ryan Brady ran for 12 yards to set up another score. Jake Brady polished off the from 2-yards out on a bootleg run to give Tooele a 26-0 lead with 9:32 left in the half.

Uintah did move the ball on their ensuing drive with the running of Tyson Colton who ran the ball seven times for 32 yards and capped the drive with a 10-yard touchdown rush to cut into the Tooele lead at 26-7 with 6:03 left.

The momentum didn’t stay with Uintah long as Tooele came right back with another scoring drive. Ryan Brady broke off a run of 13 yards and then finished off the drive with a 21-yard touchdown run to give the Buffaloes a 33-7 lead with 2:58 left.

A special teams breakdown for Tooele allowed Uintah’s Colton to return a kick 95-yards for a touchdown to cut into the Tooele lead at 33-14. Tooele added a little more cushion before halftime as Jake Brady found Ryan Brady for 20 yards and then Ryan Brady rushed for a gain of 13 to move the chains. Jake Brady finished off the drive with a 1-yard quarterback sneak for a 40-14 lead at the half.

Tooele couldn’t have asked for a better start to the game as they had seven possessions in the first half and six of those possessions ended with a Buffalo crossing the goal line.

The second half was more of the same for Tooele as the Buffaloes moved the ball 70 yards on a drive that was capped by Ryan Brady for a 35-yard touchdown and a 47-14 lead with 8:25 left in the third quarter.

Uintah forced Tooele into a third and long situation but that didn’t deter the Bufaloes as Jake Brady found Derrick Merino streaking down the middle of the field for a 45-yard touchdown strike for a 54-14 lead with 5:31 left in the third.

Tooele didn’t score any points after they hit 54 and Uintah made the game look cosmetically closer as Jurey Beddes scored from eight yards out and then Colton added his second touchdown to make the score 54-27 in Tooele’s favor.

Tooele improved their record to 6-3 overall and 3-2 in 3AA North Region.

The Buffaloes will next face Ben Lomond at home in the region finale at 7 p.m. on Friday, Oct. 24.