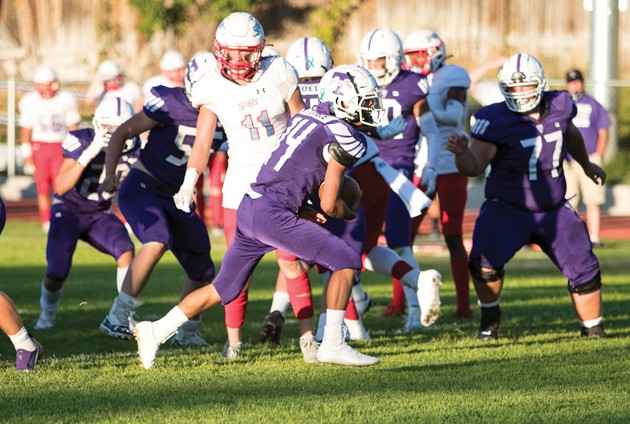 Tooele quarterback Justic Tadifa (14) carries the ball during a Sept. 4 game against Ben Lomond at Tooele High School. Tadifa threw a pair of fourth-quarter touchdown passes, but it wasn’t quite enough as the Buffaloes fell to Cedar Valley 23-21 on Friday in Eagle Mountain.

Give Tooele’s football team credit — the Buffaloes might only have one victory through seven weeks of the 2020 season, but they don’t go down without a fight.

Just ask Cedar Valley, which built a 20-point lead at halftime of its homecoming game against THS on Friday night, only to have to sweat it out at the end of a 23-21 nail-biter in Eagle Mountain.

If not for a late pass-interference call on a fake field goal attempt in the final moments, the Buffs (1-6, 1-3 Region 10) would have had a chance to drive for a game-winning score. Instead of turning the ball over on downs with the incomplete pass, the Aviators (4-3, 3-1) got a second chance with a fourth-and-1 from the 11. AJ Lindsey gained 3 yards on the play, allowing CVHS to run out the clock.

But the Buffs’ never-say-die attitude got it to that point. Trailing 20-0 just past the midway point of the third quarter, Tooele forced the Aviators to turn the ball over on downs on the Buffs’ 35-yard line. That sparked an eight-play, 65-yard drive that included a 31-yard run by Mateaki Helu on third down, moving the ball to the Cedar Valley 16. Three plays later, Helu scored Tooele’s first touchdown of the evening from 5 yards out, cutting the Aviators’ advantage to 20-7 with 2:20 left in the third quarter.

Tooele benefited from a bevy of self-inflicted errors by Cedar Valley on the Aviators’ next possession. A pair of personal-foul penalties on an Aviators punt allowed the Buffs to take over just 17 yards from the end zone. It took only two plays for quarterback Justic Tadifa to hit Dylan Makoni for a 12-yard touchdown pass, pulling Tooele within six points with 11:52 left in the game.

However, Cedar Valley put together a 12-play drive to the Tooele 4-yard line on its next possession that put the game just out of reach, as Elijah Holman’s third field goal of the game from 21 yards out made it a two-score game with 8:20 remaining. After a Tadifa interception and a Cedar Valley three-and-out, the Buffs made one last push with a quick, three-play drive that ended with a 29-yard TD pass from Tadifa to Makoni with 5:47 left.

Tadifa finished the game 6-for-12 through the air for 103 yards, two touchdowns and two interceptions. Makoni caught five passes for 99 yards and two scores, and Helu rushed for 95 yards and a TD on 10 carries.

Tooele put itself in a hole early, as Cedar Valley went 77 yards in 13 plays on its opening drive of the contest. That included a 9-yard run by Vili Mausia on fourth-and-1 and a 31-yard pass from Payton Weber to Taygen Hansen on third-and-18 to keep the drive alive. Weber finished the drive with a 6-yard TD pass to KJ Fisher to give the Aviators a 7-0 lead.

Holman booted a 31-yard field goal with 11:21 left in the half, and added a 41-yarder with 1:16 left to extend the Aviators’ lead to 13-0. After a quick three-and-out by Tooele and a short punt, the Aviators added another touchdown with 15 seconds left in the half on a 33-yard pass from Weber to Hansen.

Ty Sutherland led the Tooele defense with 12 tackles, including a sack, and Payton Sprouse added 10 tackles. Luke Avina also had a sack for the Buffaloes.

Tooele will play host to Uintah in its homecoming game Friday night at Buffalo Stadium.