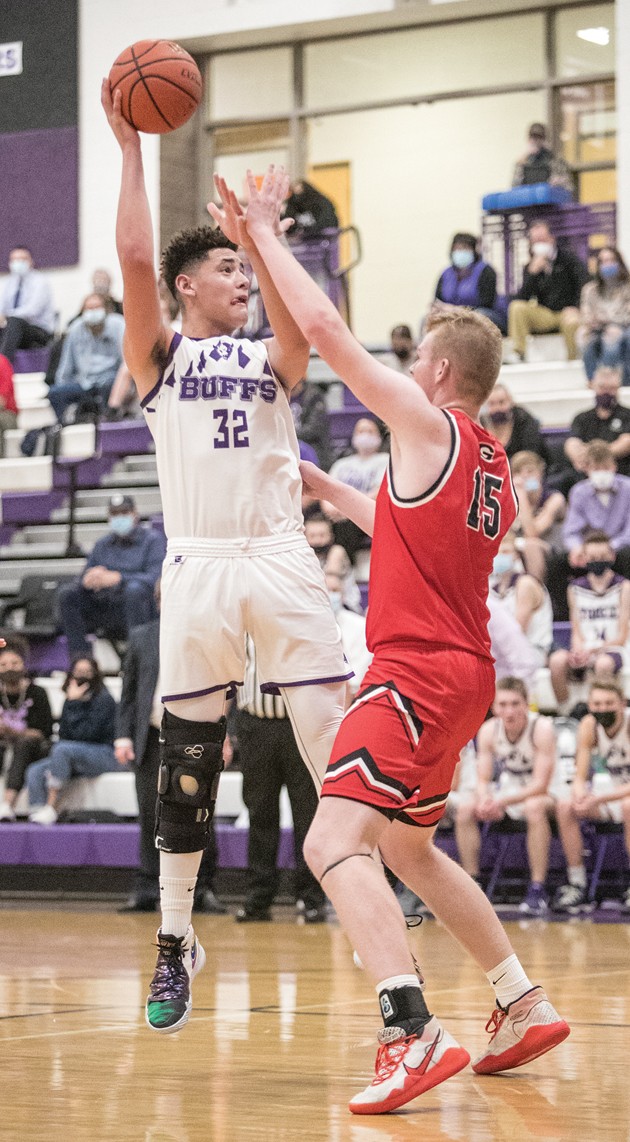 It looked like the Tooele boys basketball team was well on its way to an impressive road win at halftime of its Region 10 game against Cedar Valley on Wednesday night, only to suffer a devastating 40-39 loss.

The Buffaloes led the Aviators 29-15 through the first 16 minutes, and Cedar Valley hadn’t been able to get much going on either end of the court. However, Tooele’s offense evaporated after halftime, while the Aviators found their stride. That had Cedar Valley clinging to a three-point lead in the waning seconds when Buffs center Justin Rogers was fouled by the Aviators’ Dallin Rupper as he attempted a would-be game-tying 3-pointer.

Rogers drained the first two free throws to pull the Buffs (7-7, 3-1 Region 10) within a point, but his third attempt bounced off the rim. The Aviators (7-4, 3-2) snagged the rebound and the clock ran out before Tooele could foul, much to the Buffs’ dismay.

However, the game shifted much earlier than that. Tooele had just one field goal through the first 11-plus minutes of the second half, as the Aviators put together a 20-2 run to turn a 14-point halftime deficit into a 35-31 lead with under five minutes left in the game. Tooele came close, cutting Cedar Valley’s advantage to 37-36 on a corner 3-pointer by Nate Begnaud and a basket by Rogers, but the Aviators remained in front the rest of the way. The Buffs had their chances late as Trevor Zaleski’s 3-pointer and an offensive rebound attempt both missed with just over 11 seconds left and Tooele trailing by two. The Aviators’ Jackson Rose was able to corral the rebound on Zaleski’s second attempt and was fouled, hitting 1-of-2 from the foul line to provide Cedar Valley’s all-important 40th point.

As rough as the second half was for the Buffaloes, the first half was equally as dominant. A 20-3 run that spanned the final 4:43 of the first quarter and the first 3:53 of the second had Tooele in front 25-9, as Rogers combined with Julian Mahoe for 23 first-half points. Rogers drained a 3-pointer from the left corner and also converted a conventional three-point play in the first quarter, and added a steal and a breakaway dunk in the second.

Rogers, Mahoe and McCade Laughlin all had putbacks on offensive rebounds as the Buffs built what seemed to be a commanding halftime lead. However, the Aviators took away the Buffs’ inside game for much of the third quarter, and also forced seven Tooele turnovers as they cut the lead to 31-28.

Mahoe led Tooele with 16 points, including a 3-pointer on their first possession of the game. Rogers had 14 points. Begnaud had three points and Laughlin, Trevor Zaleski and Carston Hyre each scored two.

Rupper led the Aviators with 12 points. Cole Roberts and Ryan Gagnier had nine points each and Lincoln Roberts added eight. Jackson Rose and Ty Christensen had one point each.

Tooele has a tough test in front of it on Friday night, as the Buffaloes will play host to Region 10 leader Juan Diego. They will then face Uintah at home next Wednesday before making the short trip north on state Route 36 to face county rival Stansbury on Jan. 29.