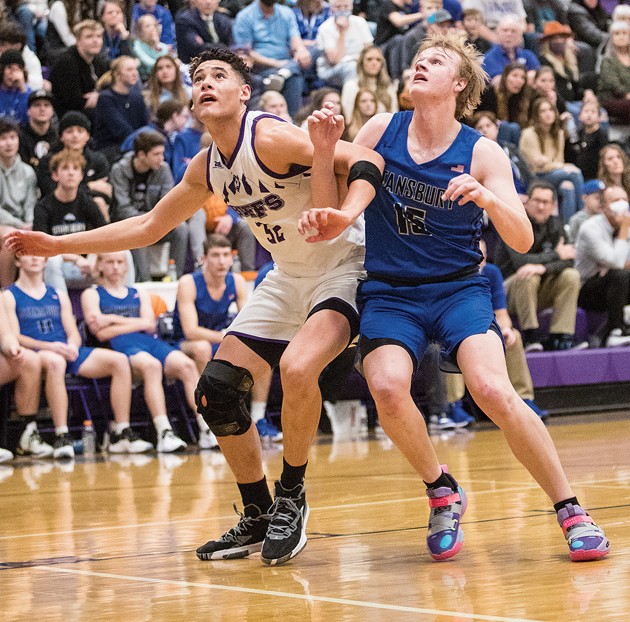 Tooele’s Julian Mahoe and Stansbury’s Will Hinton battle for a rebound in last week’s game at Tooele. Mahoe is Tooele’s only returning starter from last season. He averages 13.4 points per game for the Buffaloes.

The rest of the season looks promising for both Grantsville (10-2) and Stansbury (9-4) boys basketball teams.

The Cowboys already defeated Stansbury and Tooele and the current RPI has Grantsville rated first in 3A. The Cowboys handled the No. 3 RPI team Morgan last Friday. Grantsville hosts Ogden Wednesday, Jan. 19 and travels to South Summit on Friday, Jan. 21.

Region 13 opponents will prime the Cowboys for the 3A state tournament.  Region opponents Morgan, Layton Christian, Ben Lomond and South Summit are all in the top eight in the 3A RPI.

After a 65-46 victory at Hillcrest on Monday, Jan. 17, the Stallions are tied with Payson for first place in 5A Region 7 with a 3-0 record. Stansbury is 10th in the 5A RPI and hosted Cedar Valley Tuesday night and will play at Uintah on Thursday, Jan. 20.

The Buffaloes have made major strides, but can’t seem to close out games.Tooele is 0-4 in Region 7, but they were close to victory in their last two games with a loss at home to Stansbury in overtime and loss at Hillcrest in overtime.

Those narrow losses have given the Buffaloes some optimism going into the final eight region games.

“We’re starting to come together now and doing a lot better than we were earlier in the season,” said coach Jed Thomas. “We had a slight lead against Stansbury and an even bigger lead against Hillcrest. We just need to learn to finish.”

Tooele led Hillcrest 55-39 after three quarters at Hillcrest, but the Huskies outscored Tooele 26-10 in the fourth quarter and 7-6 in overtime to prevail 72-71.

“We’re taking care of the ball now and getting quality shots and our defense is coming around. The players are figuring out their roles and definitely playing with more confidence,” the coach said.

Julian Mahoe is the only returning starter from last season. He averages 13.4 points per game and 6.3 rebounds.

“Julian is a fantastic leader for our team; he shows a lot of passion and understanding of the game. It’s hard for someone to come in as a senior and play with some younger players, but he’s been great. He’s very unselfish,” Thomas said.

The next task for the Buffaloes is to finish games when victory is within reach.

“I think our biggest problem is that we get comfortable with the lead and stop going after rebounds. In the last two minutes against Stansbury they got eight offensive rebounds against us. That made it tough to close out.”

Tooele’s next two home games, Tuesday, Jan. 18 against Cottonwood (9-5) and Thursday, Jan. 27 against Cedar Valley (5-6) are major possibilities for victory.