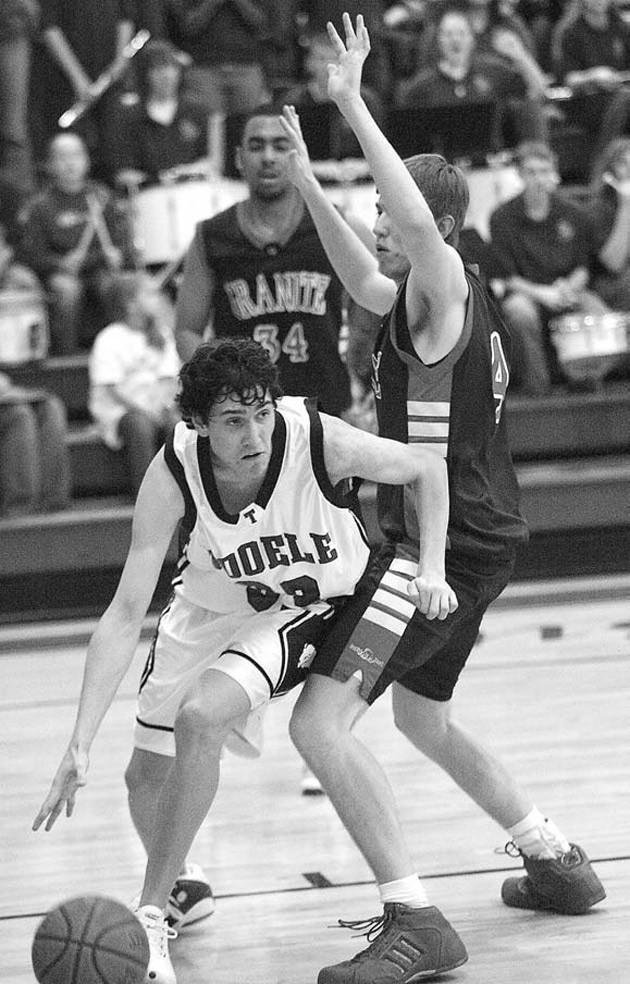 Tooeleʼs Cody Castle drives past a Granite defender in Fridayʼs state playoff game at THS. The Buffs recorded a hard fought 55-51 victory to advance to the 3A State Boys Basketball quarterfinals Thursday at the E-Center in West Valley City at 2:30 p.m.

Tooele and Granite fought to a tight and even affair in a state playoff game Friday at THS.

For three and a half quarters, the two teams battled back and forth with neither team taking control of the contest.

But when it counted, the Buffs’ philosophy that the sum of a complete team is greater than or equal to a squad with a pair of strong players paid off.

The local squad parlayed key offensive and defensive contributions from five different players down the stretch to pull away from the determined Farmers and register a hard fought 55-51 playoff victory.

Taylor Palmer produced five of his seven points for the night in the final frame while teammates Colton Hogan, Mike Holt, Nash Lockie and Cody Castle all scored points in the fourth period to vault Tooele to the post-season triumph.

Cory Waddoups poured in a game high 20 and Travis Page netted 11 to lead Granite on offense.

The game was a see-saw affair the entire evening as the lead changed hands 14 times and the biggest lead by either team was four points until Tooele grabbed a six-point cushion with 2:35 left in the contest for the largest margin of the night.

The win boosts Tooele into the doubleelimination portion of the Class 3A State Boys Basketball tournament Thursday through Saturday at the E-Center in West Valley City. The Buffs will tangle with Dixie at 2:30 p.m. in the state quarterfinals Thursday.

Tooele was poised down the stretch and playing a pair of close and come-from-behind victories the week before laid a solid foundation for the Buffs’ character in a hard fought post-season battle with the Farmers.

The local squad rallied from six-point deficits last week against Ben Lomond and Bear River to register pivotal victories to enable Tooele to win a coin flip and host Granite in the state playoff.

The Buffs upended the Scots 39-38 Feb. 9 at home and then recorded an overtime victory at Tremonton over region rival Bear River Feb. 11 to forge into a second place tie with Ben Lomond at 7-3 in region action. Tooele now sports a 14-8 overall record on the season. Tooele Coach Gary Alverson said his team struggled offensively early but more than made up for the slow start with a stellar defensive performance the entire night.

“I am glad we won,” Alverson noted. “I thought we played very well defensively. I thought we were a little bit nervous to start the game. Our shooting percentage wasn’t what I had hoped it to be. It thought both teams were a little bit tight. We were playing at home in front of a home game.

“I like the way we played defense and our press really hurt them,” the coach0 added. “I thought different people took turns stepping up. I thought Nash did a good job of slashing to the basket and Cody hit some big baskets. I thought Holt came back and played well in the second half after a sluggish first-half. I thought Colton Hogan had some good baskets. I liked our scoring balance in that we had quite a few people score. It was a win to put us in the ECenter and that made this a big win for us.”

A story on the individual scoring in the game will be published in a future edition.

The Pioneers rallied in the final frame of the game to claim a come-from-behind triumph over the Buffs Jan. 4 in Lehi.

The hosts raced to a slim 15-12 lead after one quarter, thanks to the sharp shooting of Ben Walker eight minutes into the contest. The Pioneer forward popped the cords for 10 points on five field goals in the opening session and teammate Oliver Jensen poured in five points, hitting a 3-point bomb along the way to spur the early assault.

Lockie buried five points and Taylor Palmer connected for a pair of field goals to aid the Buff effort. Holt fired in a 3-point missile to keep the visitors within striking distance after eight minutes expired.

Tooele outscored Lehi 14-13 in the second stanza to pull to within 28-26 by intermission. Holt ignited the Buff comeback bid with seven points and Josh Boucher recorded three points as each hit a 3-point shot in the period to trigger the charge. Colton Hogan and Palmer added a basket each to slice into the Lehi lead by the halftime break.

Walker blistered the home cords for 11 of Lehi’s 13 points in the frame to keep the Buffs’ comeback at bay. Matt Gardner chipped in with a field goal.

The Buffs kept the heat on the Pioneers with a 17-11 outburst in the third quarter to take a 43-39 cushion into the fourth period. Lockie caught fire with nine points, including a 3-point bomb. Boucher fired in a pair of 3-point missiles to ignite the Tooele barrage. Hogan contributed a basket to spot THS a slim advantage headed down the stretch.

Gardner allowed the Pioneers to stay within striking distance with four points in the session and Jensen buried a 3-point bomb. Walker and Tyson Nolan contributed two points each to enable Lehi to remain close and make its move in the final frame of the game.

The hosts poured in 10 of 14 free throws in the fourth period to rally in the frame and pull out the non-league contest. Larsen fired in four points, all at the charity stripe. Walker, Jensen and Brady Beck contributed three points each to spearhead the Pioneer comeback. Gardner canned a pair of free throws to aid the effort.

Holt recorded four of the Buffs’ eight points in the pivotal period while Boucher and Bryton Lawrence added two points each.

Walker poured in a game high 26 and Jensen pumped in 11 to pace the Pioneers’ victory bid. Mike Holt and Nash Lockie tossed in 14 points each. Josh Boucher tallied 11 to trigger the Buffs’ bid for a triumph on the road.