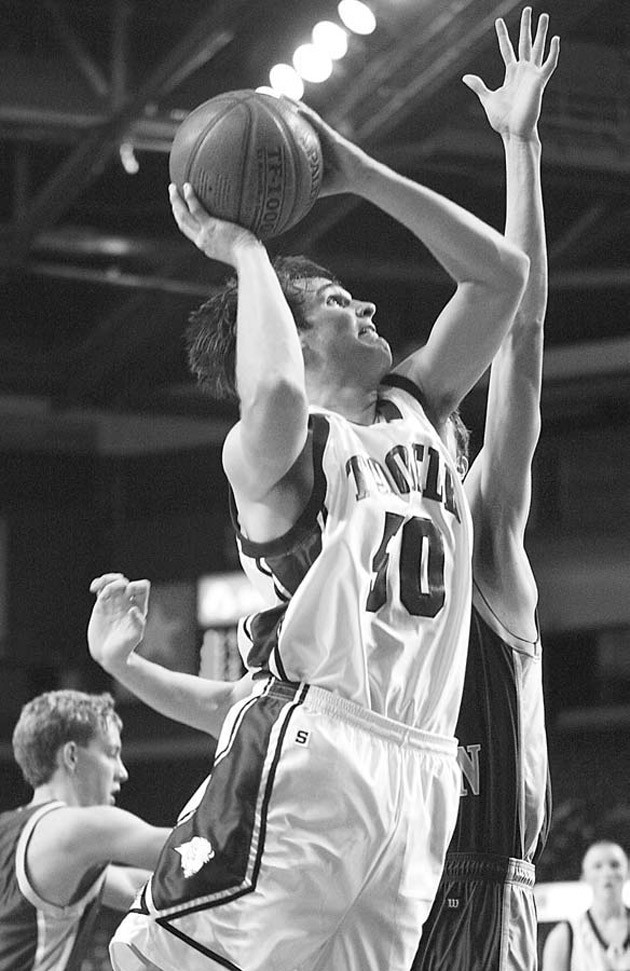 Tooele’s Taylor Palmer fires off a shot over towering Coby Leavitt in Friday’s game at the E-Center in West Valley City. The Buff forward produced some vital points in the victory over Snow Canyon and Wasatch to vault the Buffs to their first-ever boys basketball state title last weekend. photography/Troy Boman

Tooele was ready to cherish their first trip to the coveted Class 3A Boys Basketball tournament last Thursday at the E-Center in West Valley City.

But Dixie was a formidable foe and didn’t exactly let the Buffs feel too comfortable about their play. However, Tooele kept its poise and in spite of struggling at the charity stripe, Tooele found a way to win with key contributions from everyone coming down the stretch.

Josh Boucher came off the bench and buried two clutch free throws while Nash Lockie and Colton Hogan combined to produce 21 of the team’s 33 points and lift Tooele to a hard fought 33-29 victory over the Flyers in the state quarterfinals.

The Buffs suffered from a dismal six of 15 performance at the charity stripe but Boucher was true on his lone two charity tosses for the game to ice the post-season triumph.

Lockie paved the way with 11 points and Hogan fired in 10 to lead the way for the triumph. Bryton Lawrence also hit for five and Mike Holt produced four in the win.

Nick Spilker hit for seven points to spark Dixie while Brian Knell and Dale Finlinson tossed in six each. Dallas Irvin also chipped in with four.

But the struggle didn’t carry over. Tooele played extremely well the ensuing night to upset favored Snow Canyon 49-40 and then toppled favored and two-time champ Wasatch 38-36 Saturday to stun the Class 3A field and capture the school’s firstever state boys hoop crown.

However, if the Buffs wouldn’t have shown the poise and resiliency to overcome a poor free throw performance against the Flyers, Tooele wouldn’t have brought home the gold.

Tooele Coach Gary Alverson said his Buff squad did a nice job of maintaining tempo and not allowing the Flyers to get out and get easy baskets in transition.

“Dixie plays a similar style to us,” he noted.

“But they do like to fast break. We wanted to make sure we had two people back on defense at all times. They are a good team. Nash really came through offensively for us against Dixie and so did Colton. Nash is a slasher-type and very unselfish. And you have to give him some plays where he has a lot of options. He knew what we wanted and he either scored or set up someone else.

“We did the same thing with Mike Holt where he could penetrate and kick out to the open man or shot over his man,” he added. “I thought we had state jitters against Dixie in the first-half and the baskets were different than what we were used to. The team knew for us to win that we had to be good defensively. I always tell them ‘You don’t have to be talented to play defense but you have to heart and hustle’. They did a good job of that. The biggest keys to the victory against Dixie was not allowing them to fast break, Josh Boucher’s key free throws and Nash and Colton really played well offensively to give us the win.”

The Buffs overcame a slow start to outscore the Flyers 23-17 and needed clutch free throws by Lawrence and Boucher to ice the state triumph last Thursday at the E-Center in West Valley City.

Both teams struggled to find points in a defensive showdown in the first-half. In fact, Tooele outscored Dixie just 6-4 in the first frame but the Flyers produced an 8-4 scoring edge in the second stanza.

Regardless of the point production, Dixie only led 12-10 at intermission, thanks to six points from Knell and a field goal each from Finlinson, Dean Mills and Spilker in the first two quarters of action.

Meanwhile, Tooele needed a pair of baskets from Hogan and Lawrence and a field goal by Lockie to stay within striking distance at the halftime break.

Dixie grabbed a 14-10 lead on an offensive rebound basket by Irvin to snap a scoreless drought by both teams to open the first 2:36 of the period.

However, the Buffs reeled off a 6-0 run when Hogan buried a fivefoot jumper and Lockie caught fire with consecutive field goals to stake Tooele back to a slim 16-14 edge.

Knell countered with a layup to force another tie, but Hogan hit a huge offensive rebound layup with 1:32 left to give the Buffs back a two-point cushion.

Kacen Smith produced his lone points of the game on a layup just seconds later, but Taylor Palmer made a stellar pass to an open Holt and the Buff point guard buried the 3-point shot to stake Tooele to a 21-18 advantage at the end of three periods of play.

Spilker hit a layup in the first few seconds of the final frame to close the deficit to just one point, but Lockie hit a tough left handed layup and Holt found Hogan open and the Buff forward buried a five-foot jumper with 6:22 left to give Tooele its biggest lead of the game, 25-20.

Dixie refused to fold and countered with baskets by Finlinson and Irvin to close the deficit back to 25-24.

Palmer and Spilker traded free throws to keep the game a onepoint affair, but Lockie followed a free throw miss with a tremendous put back basket to give Tooele a little cushion to work with at 28-25 and only 2:38 left. The Flyers bounced back on an Irvin layup with 1:26 remaining to slice into the Buff edge once again.

And to make matters worse, Tooele would only hit five of 10 charity tosses in the final 1:10 to enable Dixie to hand around to the end. Lockie buried one of two free throws but Cody Castle made the Flyers pay with a huge offensive rebound off a missed free throw and then fouled Holt. The Buff point guard hit just one of two and Tooele still only led 30-27.

But Tooele kept Dixie at bay when the Buffs picked up the defensive intensity and Lawrence recorded two huge steals and Lockie logged another to keep the Flyers from having any shots at the basket. Lawrence hit one of two free throws with 19.0 left to give Tooele a 31-27 lead.

Dixie still stayed in the game when Spilker put in a huge offensive rebound basket with 9.2 seconds left to close the Tooele edge back to just one possession. However, Boucher rose off the bench and buried two huge free throws with 8.2 ticks remaining to ice the victory and seal the state tourney triumph.