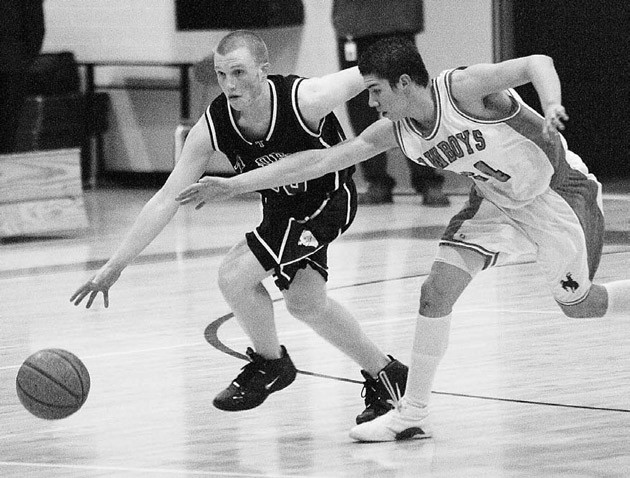 Tooele’s Mike Holt drives to the basket while Grantsville’s Butch Logan attempts to stop the dribble drive Feb. 2 at Grantsville. The Buffs needed clutch shooting from Holt last week to pull out a pair of dramatic victories over Ben Lomond and Bear River and now host Granite Friday in the opening round of the state playoffs at 7 p.m. photography/Troy Boman.

After Tooele lost it’s game to region champion Morgan on Feb. 4, the Buffs knew there was little room for error in the final week of Region 11 boys basketball action.

In fact, the local squad knew it couldn’t afford to slip up and lose either game against Ben Lomond and Bear River if it wanted the coveted second seed and home playoff game in the inter-region playoff round of the Class 3A State Boys Basketball tournament.

In both affairs, the situation looked bleak down the stretch when Tooele trailed both teams by six points in the final minute of action.

However, the Buffs refused to fold and found a way to capture both games in dramatic fashion. In fact, it turned out to be a pretty productive week for the cardiac kids from Tooele.

On Friday, the local squad knew it needed a hard fought triumph over region rival Bear River in hostile territory to have a chance to capture the runner-up seed from the Region 11 ranks and a home playoff game. But trailing 50-44 on the Bears home hardwoods with only a minute remaining in regulation, the situation looked pretty bleak for the local boys hoop squad.

However, Mike Holt buried two clutch, pressurepacked 3-point missiles, including one with six seconds left, down the stretch to force overtime and give Tooele another chance to hand their league nemesis a devastating setback at home.

Then, Nash Lockie took over with two crucial baskets in the extra session while Holt, Josh Boucher and Bryton Lawrence contributed two points each to help the Buffs outscore the Bears 10-7 and pull out a thrilling 60-57 triumph on the road.

Lockie led all scorers in the game with a 20- point performance and Holt poured in 19 to aid the effort. Colton Hogan also chipped in with eight and Boucher provided five as well.

Jason Zundel paved the way for the Bears with a team high 15 and Reggie Shaw contributed 13. Dallas Miller also provided 12 and Marcus Hanley produced nine more for the hosts.

If that improbable come-from-behind triumph wasn’t enough to make the bus trip back to Tooele joyous enough, the Buffs just one hour later won a coin toss with Ben Lomond in Ogden to earn a home playoff game Friday at THS.

On Wednesday, Ben Lomond had just taken a seemingly insurmountable six-point lead with 1:03 remaining in the affair. But the Buffs proved nothing is as it seems in reality.

Tooele rallied for a 7-0 burst in the final 56 seconds to lift the Buffs to a dramatic 39-38 victory over Ben Lomond.

The Buffs now host Region 10 third seed Granite Friday at 7 p.m. in a state playoff game at Tooele High. The winner of post-season game moves on into the doubleelimination portion of the Class 3A State tournament Feb. 24-26 at the E-Center in West Valley City while the loser of the playoff game is eliminated.

Tooele Coach Gary Alverson said his team is excited about hosting the state playoff game after a pair of thrilling comefrom- behind victories last week.

“It was a big win for us Friday at Bear River,” he stated. “I don’t know how long its been since we’ve beat them up there. Then we won the coin toss. I called heads and we won it.

“We feel good about it,” he added. “It’s been a while since we’ve had a home court game to go to state. The kids earned everything. We were picked to finish fifth but the kids really worked hard and earned the seven wins we got in a tough league. Granite is a good team. They won 12 games and finished third in their league. They have two leading scorers in Williams, averaging 17.5, and Waddoups, who has a 14.5 average. They are a good team and we have to play our best ball and take advantage of the opportunity we have playing on our home court and going into the playoffs on a winning note and on a roll. We’re feeling good about ourselves.”

The Buffs made their second dramatic come-from-behind rally in a 48-hour span to record a vital victory over the Bears Friday in Tremonton.

Bear River raced to a 13-6 cushion after one period expired to grab the early edge. Shaw poured in seven points and Lockie, Hogan and Taylor Palmer recorded a field goal each in the opening session to keep the Buffs within striking distance after eight minutes had expired.

Tooele outscored Bear River 19-15 in the second stanza to pull to within 28-25 at intermission. Holt keyed the Buff comeback with 10 points, including a pair of 3-point bombs, and Palmer hit a pair of baskets as well. Boucher also buried a 3-point missile and Lockie netted a field goal to spur the comeback bid.

Miller led the way for the Bears with four points and Zundel tallied three, each hitting a 3-point bomb along the way.

The Buffs kept the heat on the hosts with another 12-10 rally to slice the deficit to just a point, 38- 37, with eight minutes remaining in regulation. Lockie spearheaded the Tooele attack with 10 points in the pivotal period, including two 3-point missiles.

Bear River recorded a 12-7 burst in the opening seven minutes of the final frame to seize a 50-44 advantage. Zundel caught fire down the stretch with seven points, including a 3-point bomb.

For the first seven minutes of the quarter, Tooele could only muster seven points, a basket each by Lockie, Hogan and Palmer and charity toss from Holt.

However, Holt rescued the Buffs with a pair of long range 3- point missiles to extend the game into an extra session.

Tooele recorded a 10-7 surge in overtime to capture the hard fought triumph. Lockie led the way with four points while Holt, Boucher and Lawrence added two points each.

Hanley popped the cords for a 3-point bomb while Shaw and Smith hit a basket each to key the overtime period for the Bears.