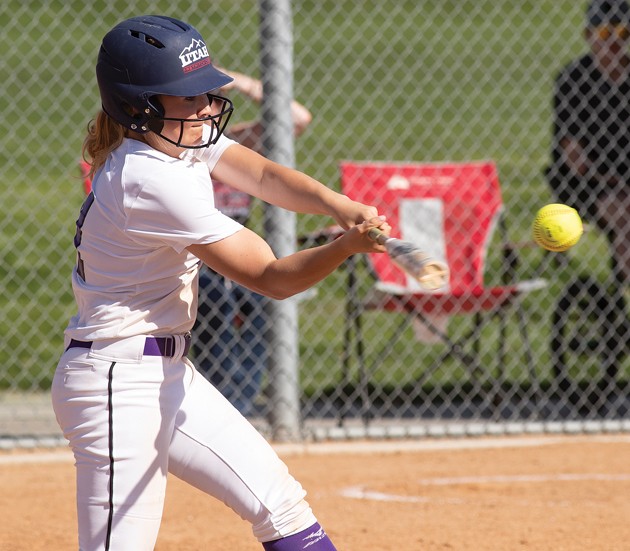 Tooele’s Kennedie Anderson makes contact with a pitch during Friday’s Region 11 softball game against rival Stansbury. Anderson had two doubles in the Buffaloes’ 13-0 win over the Stallions.

With the way this season has gone for the dominant Tooele softball team, it would be understandable if the Buffaloes took their foot off the gas and coasted into next month’s Class 4A state tournament.

Instead, it seems that the Buffs are taking their game to a whole new level.

On Friday afternoon at Stansbury High School, Tooele pounded out 14 hits — five of which went for extra bases — in a 13-0, five-inning win over county rival Stansbury that kept the Buffaloes undefeated in Region 11 play. Pitcher Attlyn Johnston threw a complete-game shutout, striking out 13 and allowing just two hits and two hit batters. Tooele (14-1, 6-0 Region 11) has outscored its region opponents 83-0 so far this season and has allowed just 13 runs in 15 games overall.

“We’ve come out swinging and we’ve done what we’re supposed to do,” Tooele coach Marissa Lowry said. “I finally feel like we’re getting into a rhythm, which is fun to see. These girls are working hard at practice, so it’s fun to see them be successful at the plate and on the field.”

Kennedie Anderson continued her recent hot streak for the Buffs, going 3-for-4 with two doubles, four RBIs and two runs scored. She got Tooele started with a leadoff double in the second, scoring on a single up the middle by Paige Rydalch, and added a bases-clearing double with two outs in the third to give the Buffs a 4-0 lead.

“Everyone in our lineup is continuing to make adjustments, and we’re seeing results out of it,” Lowry said. “We’ve just been fine-tuning everything, and so we’re finally seeing what we’ve been working on and preaching in practice.”

Stansbury (8-8, 2-4) had chances to get on the scoreboard, but Tooele slammed the door on the Stallions each time. Madi Hicks hit a two-out single and Sadie Taylor was hit by a pitch in the bottom of the second, but Johnston struck out Berkeley Bryant to end the thread. In the third, Maame Johnson bunted for a single and advanced to second base on a passed ball, but was thrown out trying to steal third. In the fourth, Baylee Angelo was hit by a pitch with one out, but was thrown out at second on a fielder’s choice by Hicks and Kaycee Thornock hit a fly ball to left field to end the inning.

“We hit the ball good — we knew it was going to be a struggle and (Tooele’s) not going to give up very many runs,” Stansbury coach Bridget Clinton said. “You’ve just got to score when you get opportunities, and we didn’t get very many. We’re still so young, and it’s just one of those things — growing pains.”

Tooele put the game out of reach with six runs in the fourth inning. Hope Weight hit an RBI double to the gap in left-center, and Rylee Anderson, Bryerly Avina, Kennedie Anderson and Rydalch each hit RBI singles as part of an 11-batter inning. Madi Baker hit an RBI double, Avina hit an RBI triple down the left-field line and Amber Lujan added a sacrifice fly in the fifth to provide the final margin.

Despite the loss, Clinton said her young team continues to make positive strides as the season goes along.

“They battled, and we don’t face that kind of pitching all the time,” Clinton said. “I thought our pitcher (Hicks) did a good job, and we had some errors that gave them some runs that they shouldn’t have had.”

Tooele faced Bonneville at home Tuesday afternoon, with a non-region home game Wednesday against West. Stansbury was in Ogden to face Ben Lomond in a region game on Tuesday, and will face Brighton in a non-region game Thursday in Cottonwood Heights.