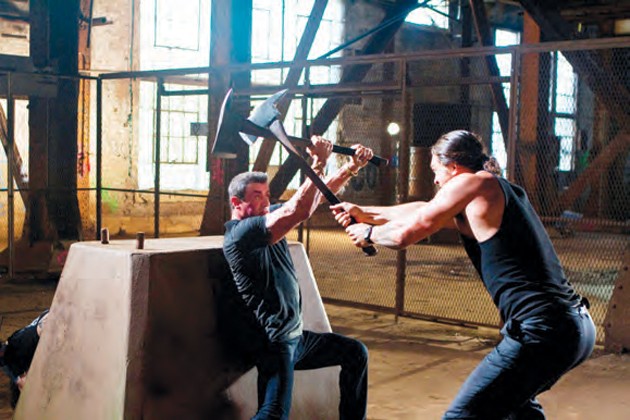 Sylvester Stallone, as hitman James Bonomo, and Jason Momoa, as rival hitman Keegan, duke it out like gentlemen with axes in “Bullet to the Head.” courtesy Dark Castle Entertainment

I knew when I took this job that I’d have to see the occasional dog of a movie, but nothing could prepare me for “Bullet to the Head.”

In “Bullet,” Stallone is a hitman named James Bonomo, or Jimmy Bobo to his friends, associates and the cops. He’s been arrested 26 times, tried four and convicted twice. Which is remarkable, given the body count he racks up on a daily basis.

The latest job Jimmy and his partner, Louis (Jon Seda), did was kill an ex-cop. Afterwards another hitman, Keegan (Jason Momoa), comes after them and kills Louis. Meanwhile, the dead ex-cop’s old partner, Det. Taylor Kwon (Sung Kang), comes down to New Orleans from Washington, D.C., to follow up on the case.

Jimmy and Taylor realize, in a roundabout way that involves Taylor getting shot by local cops, that their missions are actually the same — to find the persons responsible for ordering the hits on their partners — and decide to collaborate. Taylor is patched up by Jimmy’s tattoo-artist daughter, Lisa (Sarah Shahi), and off they go, quickly realizing that their ways of dealing with bad guys are vastly different. As they get closer, the man behind the curtain, Robert Morel (Adewale Akinnouye-Agbaje), orders more and more drastic measures be taken to deal with the duo, including holding Lisa for leverage.

The plot has holes you could sail a cruise liner through. The story wasn’t nearly compelling or interesting enough to offset the buckets of nudity, language and violence, which seldom, if ever, were explained or justified by the events on screen.

The pacing is awful. The dialogue is worse. I think the actors were probably honestly trying to do the best they could with it, but I’m not sure even Sirs Patrick Stewart and Ian McKellen could put lipstick on this pig. Much of the comic relief, and I’m going to assume it was, was in the form of Jimmy and Taylor trading racist and criminal barbs, respectively.

When I contemplate seeing this movie again, I realize I would rather be strapped to a dentist’s chair, having my teeth drilled and being forced to watch six hours of “Twilight” outtakes (”Cut! No, no, Robert, you’re not sparkly enough! Think sparkly thoughts!”). But it wasn’t quite so bad that it passed into the realm of ridiculous entertainment, such as “Troll 2” or, one of my personal favorites, “Mega Shark verses Giant Octopus.” The dialogue’s weird, the plot’s messed up and no one can act in “Mega Shark,” either, but in “Mega Shark” we at least get to see a shark eating an airplane in mid-air. That covers a multitude of sins.

I will say this in favor of “Bullet”: mass props to Stallone’s trainer and nutritionist (and likely plastic surgeon). The man is 66 and still has the rippling abs and bulging pecs to make Rocky Balboa proud. And he did seem like one of the more believable characters. Also, it seemed like Momoa probably has real potential, because he seemed to do all right despite what he was given. Oh, and Shahi wasn’t bad. OK, that’s all I’ve got.

If you dig meaningless violence and nudity, and aren’t picky about the quality of the accompanying story, I can wholeheartedly say I fully recommend “Bullet to the Head.”

For everyone else? Plenty of better movies are playing right now. Plenty.

When talking about love, it’s fairly common to hear such phrases as, “I never felt alive until I met you.” In the case of “Warm Bodies,” that phrase is literal.

This zom-rom-com (which is what I’m calling this genre — remember, you heard it here first) revolves around R (Nicholas Hault), a highly unusual vinylloving, knickknack-collecting zombie who yearns for something more than shuffling around and occasionally eating people. During one hunt, he and his group of undead chums attack a band of humans on a run for medical supplies. One of these shotgun-toting survivors is Julie (Teresa Palmer), by whom R is entranced before he eats her boyfriend, Perry (Dave Franco), and R sneaks her back to the airport where he and many other zombies live.

R promises Julie he will not eat her, and she eventually believes him and the two bond, but, alas, Julie tells R she wants to go home, where her neighbors will not consider her a potential meal. R reluctantly agrees to accompany her to the heavily guarded compound where the survivors have holed up. Little does he realize that falling in love with her has started a healing process among all the zombies that puts them in danger of being eaten by the really hardcore zombies, called boneys, as well as still being targets of the humans, led by Julie’s father (John Malkovich).

Despite the obvious parallels to “Twilight” — teenage girl and pale, undead boy fall in love, and somehow bridge the gap between their two states of living — and the fact that the biggest reason this adaptation of Isaac Marion’s novel was the success of those films, “Warm Bodies” is definitely its own movie. And though it borrows from Romeo and Juliet, the basis is loose, with the result being more comedy than tragedy.

R’s low-key, matter-of-fact narration throughout gives us a frank and morbidly funny look at the world of the undead, and begs the question of just what it means to be human. The interactions between the zombies and humans, especially as the line between food and friend blurs, is also worth some laughs. And thanks to R’s musicphilia, the soundtrack is fantastic — I’d say the best since “(500) Days of Summer,” at least.

There’s the obvious chick flick element to “Warm Bodies,” but also the whole thing is basically about zombies. Zombies and a chick flick? Sounds like the perfect date movie to me.