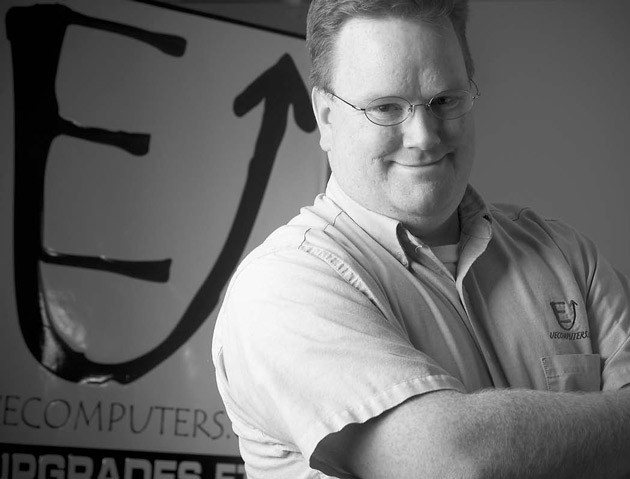 Corey Price is proud owner of Update, Etcetera Computers and can now claim he has the third ugliest logo in the state of Utah. Fortunately for Corey nobody remembers who finishes third. photography/Troy Boman

But Price said he’s thrilled to claim the distinction of having an ugly logo because LogoWorks, a company located in Linden, Utah, has created a brand new logo plus letterhead and business cards for his business.

Price was entered in the contest by a friend who told him that his logo truly was “ugly.”

Corey laughs when he explains it was 10 years ago, while living in Logan, that he started his computer business.

“I designed my own logo in about 15 minutes,” Corey said, “with the help of Microsoft Word Art. It seemed to just kind of fall together for me.”

Thing is — Corey liked his logo. His wife, Amy, liked it too. “And the people I showed it to, said it looked good,” Corey added.

Now he’s wondering if all those friends were being honest or just tactful.

“My friend, Toby Dillon, finally told me he just didn’t think my logo looked right,” Corey said. “Some people looking at my business cards or the logo printed on the side of my van seemed to think my company’s name was UE Computers. I had a lot of checks made out that way.”

So, Toby called Corey several weeks ago to say, ‘I’m going to enter your logo in the Ugliest Logo Contest. Your logo just isn’t working for you.”

Wow! Corey didn’t have any idea that someone actually thought his logo was that bad. He laughed as he gave Toby permission to go ahead with his plans.

Well, wouldn’t you know it? It wasn’t long before Corey was contacted by contest officials who said his company was in the top 15 for having the ugliest logo in the state. Corey was later contacted to say he had taken third place in the contest, which earned him a spot on KSL-TV’s Good Morning Show. LogoWorks unveiled a new logo for Corey on that show.

“It was fun helping out these businesses with logo makeovers,’” said Morgan Lynch, president and CEO of LogoWorks.

“I think the contest has shown businesses how critical it is to look professional, no matter how small you are, and how nowadays any company can get a professional corporate identity very affordably and quickly.”

The company pioneered a new model of design that leverages a team of designers on each project in order to create more variety and choice for the customer.

To date, LogoWorks has empowered over 13,000 businesses with the same quality of design that used to be accessible only to larger businesses, at prices just a fraction of the cost: $265 to $549.

For more information about the company, log onto the Internet site: www.logoworks. com