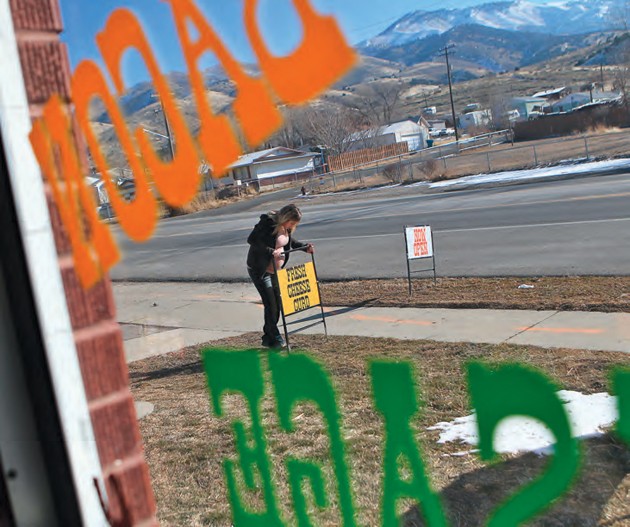 Ashley Ray sets up a sign outside of the new Hunsaker’s store in Stockton that will sell meat, jerky and cheese. Mike Hunsaker will continue to process meat at his Tooele location while the cheese production will be at the Stockton store.

February 7, 2012
Butcher hopes to carve out success with Stockton shop

A Tooele meat processing company that has struggled for business amid controversial circumstances is looking to rebound by expanding to Stockton.

Hunsaker Meats, which has been in business on the west side of Tooele for a dozen years, was hit hard when Union Pacific closed its 1000 West railroad crossing in April 2010, effectively cutting off the business from its primary link to the city. Since then, said owner Mike Hunsaker, the business has tried to increase its distribution to grocery stores to make up for lost revenue, and cut wages and workers to reduce costs.

“We’ve managed to survive, but it’s been hard. You have to manage every dollar,” he said.

Expansion was not in the business plan until the road closure, Hunsaker said, but with the business now located on a dead end, he began looking for a place with a more visible presence. He found that in the form of the old Stockton Post Office, which he purchased.

Hunsaker said he has had frustrating interactions with Tooele City, including problems putting up signage to direct customers to the old store, but has found officials in Stockton easier to work with.

“They’re just a little more receptive in wanting and getting business in there. Anytime you do something with Tooele City — I’ve owned the building now for 12 years — there’s always something that requires a lot of money,” he said. “They look at you like you’re a big business with plenty of money to spend. They don’t look at you like you’re the little guy who’s just trying to make it.”

The old post office, which Hunsaker estimates to be about 1,200 to 1,500 square feet, is about the same size as the Tooele store. While not an obvious choice for a meat and cheese shop, Hunsaker said it has fit the bill nicely, and has required very little retrofitting.

“I think it’s kind of a cool idea, to be honest with you. It’s an old post office in a nice little rural town and a lot of traffic goes through there,” he said. “I think it’s a nice, nostalgic idea.”

Hunsaker’s original location, still visited by loyal customers, remains open for business, and Hunsaker said there are no current plans to close or move it, whatever happens with the Stockton store, though some considerations may be back on the table when the economy improves. The Stockton location will sell many of the same products, as well as artisan cheeses and cheese curds, which will be hand-crafted on site.

“Any of our customers who have been buying meat and stuff from us here [at the Tooele location], can get that stuff out here, and then out there we’ll also have meat and cheese,” he said. “It’s kind of the best of both worlds.”

The current cheese fare is so far mostly limited to cheese curds, he said, but other types of cheese, such as aged cheddar, are in the works. The store is too small to move the entire Hunsaker’s Meats operation to, he said, but will do nicely for its assigned purpose.

The Stockton location had a soft opening two weeks ago, and Hunsaker said so far the reaction has been good.

“We’re pretty pleased with what we’ve been doing,” he said. “I think people out in that area are pretty excited to see something like that out there. We had customers coming into Tooele coming to get stuff, and now they don’t have to go as far to get it. I think we’ve had a good response.”

Hunsaker’s Meats in Stockton is open from 10 a.m. to 6 p.m., but Hunsaker said hours will likely be extended for the summer months.