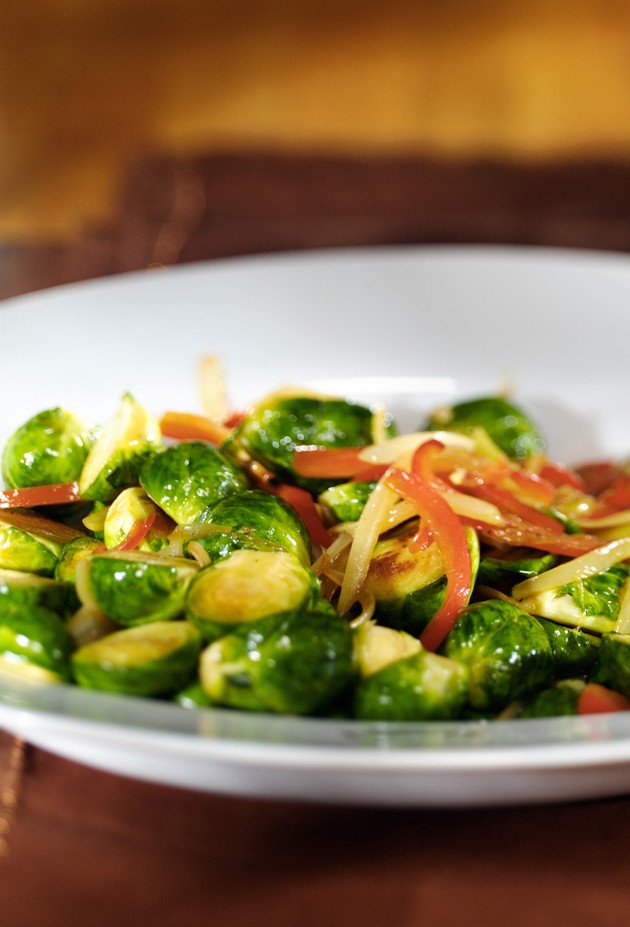 Brussels sprouts, named after the Belgium capital, originated in northern Europe and were probably first cultivated in this country in the early 19th century. It is possible that Thomas Jefferson planted Brussels sprouts in his vegetable garden. Related to cabbage, but milder in flavor and generally more compact, Brussels sprouts are available year round, but their peak runs from autumn to early spring. Nearly all of the crop is grown in California, and about 80 percent is frozen.

At the market, fresh Brussels sprouts are sold either loose or in pint or quart tubs. At farmers’ stands or country markets, you may be lucky enough to buy them still attached to their stem. In any case, buy only as many as you can use in a short time.  Unlike cabbage, which can keep for weeks, Brussels sprouts last only a few days in the refrigerator.

Much of what is written about cooking Brussels sprouts reads like a warning label.  “Don’t overcook, don’t undercook, braise slowly, steam quickly!” We took the easy way by combining two tried-and-true cooking methods, boiling and sautéeing. First we blanched the sprouts in a pot of boiling water for a couple of minutes and then sautéed them in a skillet with onion and sweet pepper. Just before taking them off the stove, we added a savory maple syrup glaze made with soy sauce and Dijon mustard. They were brought to the table in a deep bowl. When someone asked to pass the baby cabbages, we knew exactly what they wanted.

Try these with roasted chicken or any roasted meat, or make a vegetarian main dish by stirring in 8 ounces diced firm tofu, seasoned or plain, into the finished dish.