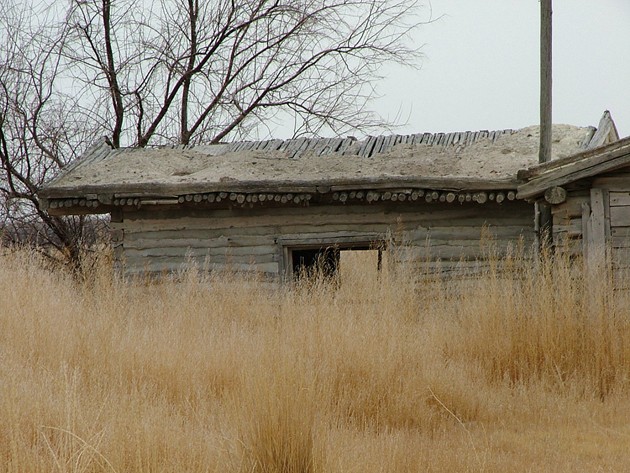 An old cabin in Callao is similar to what the Pony Express Station cabin would have looked like.

“Once you read a book you care about, some part of it is always with you.”

If you continue west along the Pony Express Trail from Boyd Station in Tooele County’s West Desert, you will arrive at the tiny hamlet of Callao and the location of Willow Springs Station.

Willow Springs is one of the most favorably positioned stations along the Pony Express Trail west of Salt Lake City, because there is dependable water, grass and timber available to the west on the Deep Creek Mountains.

The setting here is unmatched for beauty as well. When the morning sun hits the Deep Creek’s granite boulders and high peaks, it is a wonderful thing to see. Willow Springs is one of the stations that was well documented by numerous individuals. I scoured these sources and came up with some interesting information to share.

On Sept. 30, 1860, Sir Richard Burton stopped overnight at Willow Springs and made the following observations as he approached from the east and Boyd Station.

“As we advanced the land improved, the salt disappeared and the grass was splendidly green,” he wrote.

Burton also documented that there were gopher holes, snipes, willows and wild roses. This oasis was nothing like the horrid desert that his group had crossed from Simpson Springs to Boyd Station.

One of my favorite books that provides a glimpse into the Pony Express from a man who traveled the trail and published detailed notes is “City of the Saints” by Burton. All of the amazing insights into how the trail was in September 1860 are captured in that work. When I read it, knowing the terrain as I do, I am almost transported back to that time.

In “City of the Saints,” Burton observed that the Pony Express rider at Willow Springs Station was a young, handsome Mormon who wore the effigy of a sword in his felt hat. Dozens of Mormons answered the call to become Pony Express riders. Henry “Doc” Faust, Howard Egan, H. Erastus Egan, Howard Ransom Egan, John Fisher, William James, and Parley Hall answered that call. Some of these riders were as young as 14-16 years old! Utah’s history is full of instances where the supposedly insurrectionist Mormons stepped right up to participate in endeavors that were good for the nation.

Burton added that the station keeper was an Irishman. He was likely Peter Neece, whom we will talk more about in a future column. Burton described the log hut station as being foul to the extreme and that the flies soon drove them outdoors. I have an office in the West Desert not far from the Pony Express Trail, and I will tell you the flies in any desert building get ridiculous if you don’t keep after them. I cannot imagine how horrible the flies and mosquitos must have been at the stations.

Filth aside, Burton stated that hospitality at the station was not lacking as they soon sat down to a dinner of salt beef and bacon for which they were not allowed to pay. As there was only one room in the log cabin, the group had to sleep outside and no doubt American Indians were on their minds as Burton said, “Gosh Yuta are apparently not a venturesome people, still, it is considered advisable at times to shift one’s sleeping quarters and acquire the habit of easily awakening.”

Due to the natural resources and beauty of the Deep Creek Mountains, Goshute, Paiute and Shoshoni Indians frequented and lived in the area for years. Archaic peoples no doubt occupied these mountains for thousands of years before that as well. Capt. James H. Simpson visited the area in 1859 and he described the first American Indian that he and his men encountered in stunning detail:

“He wears his hair tied up at the temples and behind; carries a buckskin pouch and powder horn, a bow and quiver swung on his right side, wears a pink checkered American shirt, buckskin leggings and moccasins, and a blanket around his loins. An old black, silk handkerchief is tied about his neck. He has one huge, iron spur on his right heel, and rides a sorrel pony. His height is 5 feet 7 inches, has a stout square frame, age probably 35; carries a rifle. His bow is 3 feet long and is made of sheep’s horn, arrow, 25 inches long, feathered and barbed with Iron.”

He sounds like an interesting fellow. Yet, those who are familiar with the history of the Goshute Indians, their customs and way of life back then, will recognize that he does not fit the description. He was probably a Western Shoshoni brave as they tended to frequent the area — especially at Deep Creek. Just as Burton warned, you wouldn’t want this man prowling around your station while you were sleeping at night.

One of the most colorful individuals to ever carry the mail through Tooele and Juab counties was Nicholas Wilson. In his book “White Indian Boy,” Wilson described the Pony Express and its operations in detail. Wilson wrote, “When we started out from a station we were not to turn back no matter what happened, until we had delivered the mail to the next station.”

Wilson added that day or night, rain or shine, Indians or no Indians, they had to get the mail through.

If you visit the area today, you will see large, ancient cottonwood trees with small log cabins at their bases at various locations. The ground is lush, fed by many springs in the area. and the grasses are knee high in many areas. It is rural life to the extreme on the border of Juab and Tooele counties. There is a conical Pony Express marker at the entrance to the old Bagley Ranch, which is claimed to be the location of the Willow Springs Station.

There are approximately 25 people who call Callao home and there is a tiny school house in operation there. What does Callao mean? Who knows? But there is a city named Callao in Peru, and given the resemblance of the Andes and the Deep Creeks with their adjacent deserts, it is plausible that a sheep herder from Peru named it in honor of his home town.

Other interesting sites near Callao include: Granite Creek, Indian Farm, and Tom’s Creek Canyon in the Deep Creek Mountains. The site of the Callao Civilian Conservation Corps camp is now a Bureau of Land Management campground on Tom’s Creek a short distance south of town on Gandy Road. Gold Hill to the northwest is also interesting and has a colorful history all its own. Regardless of what you decide to visit, a trip to Willow Springs Station and Callao will not soon be forgotten.

The Pony Express Trail from SR-36 to Callao is a gravel road. Motorists are advised the route is remote and can be extreme during bad weather. Travel by SUV is advised with at least one reliable spare tire. Food, water and protective clothing are also recommended regardless of time of year.