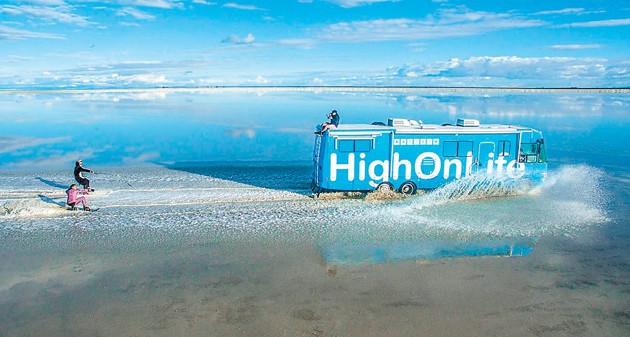 This photo, taken from the Facebook page, “High on Life Sunday Fundayz,” shows members of the Canadian group High on Life waterskiing and wakeboarding on the Bonneville Salt Flats last spring. A member of the group has agreed to pay fines in connection to the stunt.

A member of the Canadian group High on Life agreed last week to pay fines related to violations on the Bonneville Salt Flats.

In addition to paying $610 for violating the salt flats, High on Life member Parker Heuser agreed to pay fines related to violations on other public lands, according to Kimberly Finch, public affairs specialist for the Bureau of Land Management in Utah.

The incident at the Bonneville Salt Flats took place early this year. High on Life posted a video on April 1 that shows three group members waterskiing and wakeboarding behind their tour bus on the flats.

The salt flats, located a few miles east of Wendover in Tooele County, are known internationally for their natural crust of halite and other minerals. They cover more than 30,000 acres, or 46 square miles, and have hosted thousands of visitors, filmmakers and land speed racers, according to the BLM, which manages the area.

In May, the BLM began investigating the stunt. The agency later cited each man for failure to obtain a special recreation permit, operating an off-highway vehicle off of designated areas or trails, and creating a hazard and/or nuisance to public lands or its users.

Vehicles are banned from driving on the salt flats while wet to protect the fragile salt crust from damage. The BLM requires people to apply for a special permit to recreate or hold an event on the flats, Finch said.

“The special recreation permit is … for the benefit of the user and the managing agency,” she said. “Basically, if someone wants to go and do an activity, such as racing on the salt flats, they come to the BLM and learn if there are any regulations. There may be some things you might not know about, A, how to protect the resources and leave them in good condition and, B, anything that might impact your visit, like if a road were closed because of a washout. … It’s in place for a reason.”

Requiring special recreation permits is a standard practice at the BLM as well as other management agencies, Finch said.

Members of the land speed racing community, which prizes the salt flats while dry for their hard, flat surface, were outraged when they saw the video from High on Life, said Louise Noeth, public information officer for Save the Salt Coalition.

“There are plenty of signs that warn people, that tell them to stay off the salt when it’s wet and they ignored all that,” she said. “They had no respect for the American public lands or any of the warnings associated with it.”

Driving on the salt while it’s wet destroys the tiny pores in the ground that allow brine to flow up and naturally replenish the salt crust. It also leaves scars and gouges on the land, making it dangerous to drive at high speed during racing season, Noeth said.

“That was just egregious,” she said. “Yes, it’s public land, but they [the racers] take that place very personally. So when somebody comes in with a vandalizing behavior we get a little upset — no, we get a lot upset. … All we want to do is make sure the Bonneville Salt Flats are still there in about 50 years.”

Heuser and Cross pleaded guilty to charges of violating public land and both have been banned from entering public lands in the U.S. for five years. The other men have pleaded not guilty, according to a BLM news release.

“For the remaining three defendants who pled not guilty, that case is still moving forward,” Finch said. “They will be appointed court attorneys … and there will be a meeting in early December to determine how to move forward.”

The High on Life group makes its living traveling around the world filming “fun and adventurous videos,” according to its Facebook page, “High on Life SundayFundayz.” It also sells clothing.

In addition to being cited for the salt flats incident, group members were cited after posting a few other videos this year, including a recording of them swinging from Corona Arch near Moab while the arch was closed and a video of them walking out-of-bounds near Grand Prismatic Spring in Yellowstone National Park.