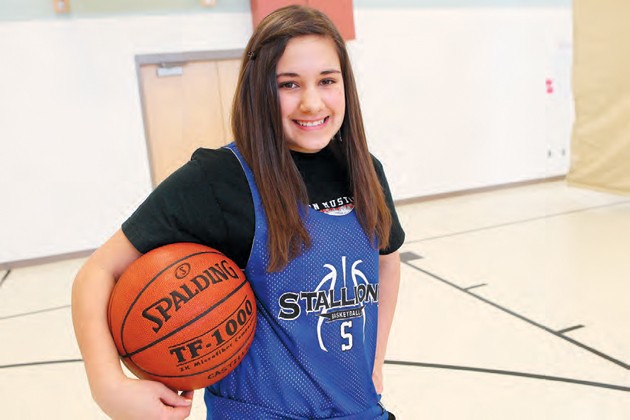 In a few years Kaylee Castillo may be sinking foul shots just like Erika Alvey did this year for the Stansbury Stallions. Senior Alvey connected on 80 percent of her free throws.

The 11-year-old Stansbury girl finished second in the state this month in the 10-11 yearold division of the Utah Elks Hoop shoot contest at Provo.

Castillo first had to win a foulshooting contest for her class at Rose Springs Elementary School, then win against several girls her age in the entire school. Castillo continued her winning ways with a top finish at the district shoot-off at Tooele Junior High School to qualify for the state event. The district event included girls from cities throughout northern Utah.

Castillo shot her way to second- place at the state shootoff at Provo Peaks Elementary against other winners from the Utah Central District and the Utah Southern District. Castillo knocked down 16-of-25 foul shots while the state winner, Cassandra Esquivel of West Haven, hit 18-of-25 foul shots. Esquivel will compete in Las Vegas at the regional contest on Saturday. Regional winners head to the national contest in Springfield, Ill., on April 20.

“First you shoot 10 foul shots and the next time around you shoot 15 shots,” said Kaylee Castillo.

The young sharpshooter currently plays in the Junior Stallions league in Stansbury and the Junior Jazz league in Grantsville.

“She’s just trying to get as much court time as she can,” said Kaylee’s mother Heather. “Someday I’d like to earn a college scholarship for basketball,” Kaylee said.

State Elks Hoop Shoot Director Robert Smith said there were 3,620 girls who had a chance to shoot foul shots in the 10-11 age group throughout the state.

The Castillo family moved to Stansbury Park in 2011 from Orangefield, Texas, when Kaylee’s father Bobby was hired by Rio Tinto Kennecott. Bobby Castillo was a top player at Converse High School in Louisiana. Kaylee’s uncle Tony Castillo was a two-time all-state basketball player in Louisiana and played at East Texas Baptist University in Marshall, Texas.

The Elks Hoop Shoot provides a unique, character-building and competitive program for all participants, regardless of their athletic ability or previous experience. The program provides children the opportunity to experience healthy competition, establish positive relationships with peers, and develop self-management skills that aid in achieving school and life success.