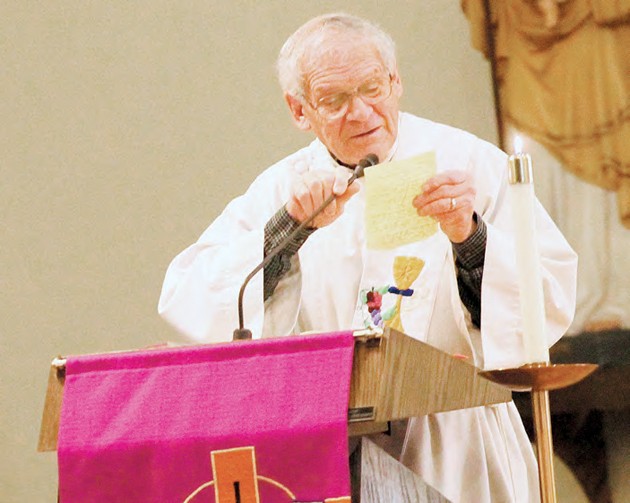 A few weeks after the local Catholic community was shocked to hear that Pope Benedict XVI had resigned, a new pope was elected to take his place.

Argentine Cardinal Jorge Mario Bergoglio, who served as archbishop of Buenos Aires, was announced as the new pope last Wednesday. Bergoglio, 76, chose the name Pope Francis. He chose his name in part because of St. Francis of Assisi’s devotion to the poor.

Even though about 480 million of the world’s 1.2 billion Catholics live in Latin America, the job of pope has gone to Europeans for centuries.

She knew that a new pope had been chosen because of a “Pope App” she had downloaded onto her smart phone. The children were in the middle of singing a song when her phone buzzed to alert her that white smoke was rising. The choir stopped singing to watch the smoke rise on Needham’s phone.

“The children were just amazed at seeing the moment happen live,” she said. “It was an amazing moment.”

Needham said that same evening she also met with the Spanish choir and everyone there was amazed that a Latino pope had been chosen.

“Right away they sensed he was walking with them and they were walking with him,” she said. “They felt there was no distance between Tooele, Utah and Rome, Italy. That just made me more excited.”

Needham said she was also happy to hear that Bergoglio selected Francis as his name.

“It struck my heart,” she said. “There is a need for the church and all of us to do a better job at reconciling with one another. Many look to St. Francis as the ideal example for reconciliation. That touched my heart.”

Father Samuel Dinsdale of St. Marguerite Catholic Church said he was pleased that Francis was selected for a number of reasons.

“He came from the Americas, he is a very humble man, and he’s calling the church to provide service to the poor and be a more austere church,” he said. “He wants to make sure that we’re not too frilly. His gospel message is one of personal witness and it’s not about fancy buildings or fancy trinkets. It’s about a call to evangelize to all people, but have special recognition for the poor. I couldn’t be more pleased with his selection.”

Billy Sandoval, grand knight of the local council of the Knights of Columbus, agreed and said Francis was a great choice.

“I know a lot of people were hoping for a pope that would be liberal and maybe one day allow women to become priests or allow priests to be married, but I don’t think that will happen with Pope Francis,” Sandoval said. “The majority of Catholics are Latinos, so that made South America very happy.”

Dinsdale said it’s refreshing to have a pope whose first language is Spanish. He said because the majority of Catholics in Utah are Spanish-speaking, they are overjoyed to have a pope to represent them.

“They are so happy to have someone who represents Latin America and their traditions,” he said. “A lot of people are impressed with him and what he’s done. He asked for a blessing from the people after he was elected, and he took the bus rather than a limo when he left. He just doesn’t read from the transcript. He speaks from his heart and he’s very open and people can feel that he’s genuine.”

Dinsdale said his hope for Francis is to emphasize a call to simplicity and to the service of the poor.

“That’s always been there, but I think and hope with Francis that this will be particularly emphasized,” he said.

Sandoval said his hope for Francis is to straighten out the Catholic Church.

“Our church isn’t the only church that’s had scandals, but because it’s the biggest religion in the world, there’s a lot more tension,” he said. “I believe he’s going to straighten it out. He’s just one man, and he will need the help of the Cardinals, but [his election] has made a lot of people happy.”

Needham said she hopes Francis will inspire the world to learn a little more about reconciliation and being at peace and forgiving with one another.

“Maybe he’ll help the world be a little more peaceful,” she said.

The official Mass to inaugurate Francis as the bishop of Rome took place today.