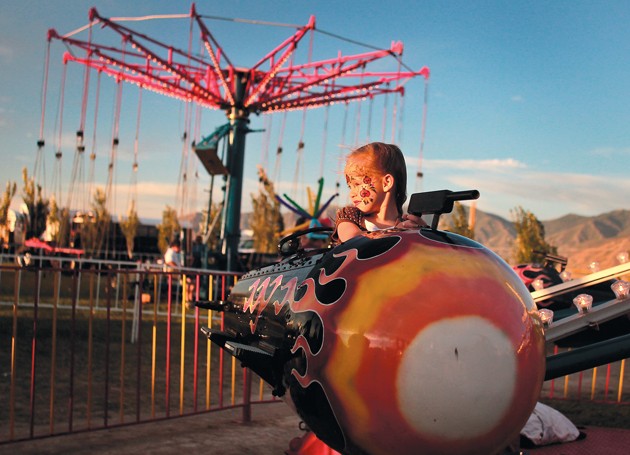 Alee Carson looks out while on a ride at the Tooele County Fair Aug. 7, 2010. The Tooele County Chamber of Commerce and the county commissioners are meeting Tuesday night to discuss the chamber possibly taking over the county fair.

The chamber board of directors overwhelmingly voted to take over the responsibilities and run the county fair.

The vote was conducted by email, following a discussion at the chamber’s April 3 board meeting, according to Executive Director Jared Hamner for the chamber.

The announcement was made in a chamber news release that was received at press time today.

“One of the purposes of the chamber is to celebrate community prosperity,” he said. “The fair is a 60-year tradition in the community and it should continue.”

The fair is a community celebration and large events like the fair help the business community, according to Hamner.

Chamber officials will meet with county commissioners at 5 p.m. tonight to work out a rental agreement and details for the fair, he added.

Commission Chairman Bruce Clegg said he was not aware of the chamber’s plan to take over the fair, but he welcomed the proposal.

Commissioner Shawn Milne, who holds a non-voting advisory seat on the chamber board of directors, said he knew the chamber was discussing taking over the fair.

“It’s great to see the community stepping up to take over the fair,” Milne said. “This is a perfect example of Tooele County’s community spirit.”

The 25-member fair board voted unanimously in March to cancel the fair in light of the county’s budget problems and layoffs of the entire parks and recreation department. That staff has played an important role in running the fair in the past.