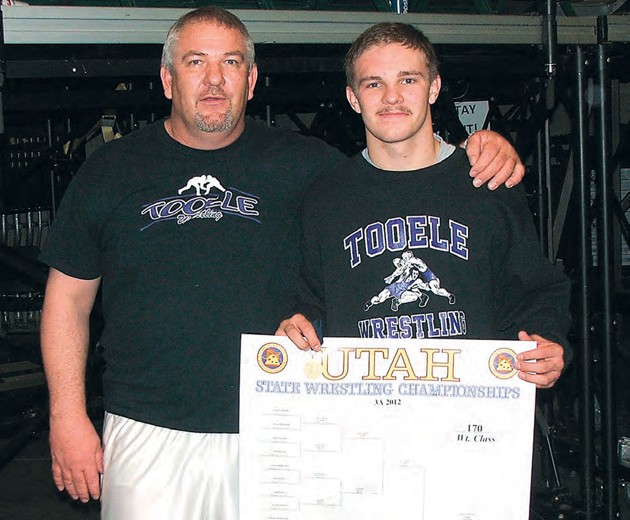 February 21, 2012
Champ worked hard as he climbed ladder of success

Zach Coffman trailed 8-7 in his state championship match to Union’s Steve Welsh with only 30 seconds to go. The Tooele wrestler spun out of Welsh’s control to tie the match and then took his opponent down in the final second to earn the 3A title at 170 with a 10-8 victory.

Coffman needed strength, energy and determination in the final minute of the match to become a state champion. That sweet victorious moment was preceded by years of hard work and dedication. The THS junior has spent hours and hours honing his skills to become a superb prep wrestler.

“During the high school season I put in 20 to 25 hours per week. In the off-season I wrestle approximately 50 more matches and practice about five to 10 hours per week depending on if I’m preparing for a tournament,” the state champ said.

Like many people who excel in a sport, Coffman started early in life and never let up.

“I began wrestling when I was 5 years old and I loved the sport, but I hated competing in front of people,” he said. “I have always had success but for those first three or four years I had this great fear of competing and losing in front of numerous people. When I reached sixth grade I seemed to overcome this fear and that’s when I started to really take off.”

Coffman’s high school record is 152-14 with 118 pins. He made the finals last year, finishing second place and grabbed sixth place at state as a freshman.

One advantage for Zach Coffman is that his high school coach is his father Gary Coffman who started a youth and junior high school wrestling program in Tooele back in 1999 and became the THS wrestling coach in 2006. The elder Coffman started wrestling when he was sophomore in high school and wrestled two years at Northwest Community College in Powell, Wyo. and one year at Mesa College in Grand Junction, Colo.

“Wrestling is a sport that teaches you lifelong lessons. The discipline and desire that it takes to be a wrestler pales in comparison to anything I have ever done,” said coach Gary Coffman. “In wrestling to earn a varsity spot, you must compete against all other team members at your weight and win. The beauty of this is that you can be varsity as an underclassman. The coach does not decide whether you will be a starter or not — you do.”

Gary Coffman loves the sport of wrestling and says if a somebody has that passion they have a good chance at success. He preaches that as a wrestler you must be willing to pay the “success rent” because you can never own success you can only rent it and the rent is due every day. “One must remember that the rent always goes up when you want more success,” the coach said.

“I think Zach’s competitiveness drives him to strive to become the best not only at wrestling but everything he does. He is always willing to sacrifice to better prepare himself for the next level. Zach spends numerous weeks in the off-season training at camps, clinics and tournaments. The dream to wrestle at a the Division 1 college level and maybe even in the Olympics has always driven him to keep preparing year after year,” his father said.

The champ said he wants to thank his family and friends for their support and especially his dad, mom, sister and Mark Fuller for helping him through the rough times during the season. Mark Fuller is a four-time wrestling Olympian, Zach’s cousin and mental coach.

Zach said his goal next year is to work harder than he did this year and repeat as a state champion — most likely in the 182-pound class.

Although he’s wrestled for several years, it seems Zach Coffman may be just on the verge of realizing his full potential. “I want to wrestle after high school and my options are wide open if I keep paying my success rent,” he said.