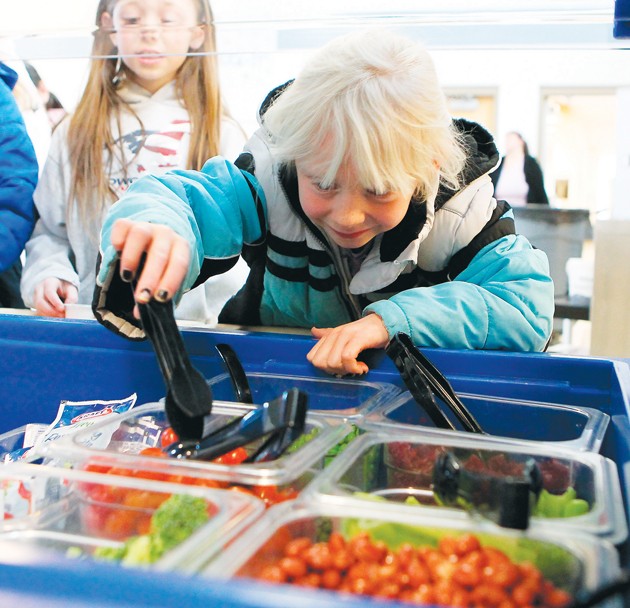 School lunch has dramatically changed in recent years with healthier food, and the Live Fit Tooele County Coalition hopes those changes will have lasting positive effects.

Final regulations for school lunches, developed by the U.S. Department of Agriculture to comply with the Healthy Hunger-Free Kids Act of 2010, went into effect last fall.

The guidelines were designed to increase the amount of vegetables, fruits, and whole grains served to students while decreasing the amount of fats, sodium and foods with little nutritional value.

Since the change, Carrie Palmer, food service coordinator for Tooele County School District, said students have been responding “really well.” She said the changes, although they’re not new anymore, seem to help students make healthier choices even outside of school.

“With everything I’ve been reading, I’ve heard the percentage of healthy eating has been better, so yes, I think [the changes] are working,” said Palmer. “It’s just so important for their health. Eating healthier meals and them just all around choosing healthier things is good. Things [like the salad bars] help them to learn that.”

Teen obesity became a serious concern for the Tooele County Health Department and school district after a study released by the Utah Department of Health last October showed the county is the worst in the state for teen obesity.

The study, conducted in 2011 among eighth, 10th and 12th grade students, showed 10 percent of adolescents in Tooele County were obese. The county is already the worst in the state for adult obesity.

The Live Fit Tooele County Coalition is working to combat this high rate, and feels that school lunch is just one way this can be done. Malaena Toohey, health educator and obesity prevention coordinator for the county health department, and chair of the Live Fit Tooele County Coalition, said the schools’ salad bars and fruit selections are a great way to teach children at a young age how to love fruits and vegetables.

Each school in the district has a salad bar available to students at lunch.

“We purchased a salad bar for every school a couple of years ago as a way to get kids used to eating healthier foods before the new regulations started,” Palmer said. “We do a salad bar in every school every single day and kids can take as much as they want of that. The salad bar is not required in any schools, but we wanted to provide them.”

Toohey said the Live Fit Coalition commends the school district’s food services department for going above and beyond the USDA’s recommendations to make menus healthier by including salad bars.

“They’re not just serving the cheapest form of a salad bar either,” she said. “They’re mixing spinach and other greens into the lettuce that adds extra nutrients. It’s not just iceberg lettuce.”

Toohey has a first grade daughter who she occasionally eats lunch with at school. Through this, she has learned something interesting about kids when it comes to the salad bar.

“When I have gone to eat with [my daughter] a couple of times, I’ve noticed that the kids could use some education on how to make a salad from the salad bar,” she said.

Because of this, Toohey said the Live Fit Coalition plans to devise an educational campaign to teach kids how to use salad bars and create their own different kinds of salads. In addition, the coalition also has a goal to keep kids from wasting fruits and vegetables they’re served during lunch at school. Toohey said these educational campaigns will be completed within the next year to year and a half.

She also said school lunch is a great way for students, especially younger ones, to try new things that aren’t introduced to them at home. She said completing the educational campaigns is important because most people form their eating habits when they’re young, especially when it comes to fruits and vegetables.

“As a parent, sometimes it’s really easy to fall into the trap of not introducing your young children to fruits and vegetables you don’t like, but it’s important to think outside of yourself,” Toohey said. “You still need to present the fruit or vegetables in a positive way to make them more apt to try it.”

Toohey said once a young child starts to really like something, they typically start to put the pressure on their parents to provide them whatever it is they like—especially if they’re grocery shopping with their parent.

The school lunch requirements differ between grades. Three out of the five food groups have to be served to each student at lunch.

“We also have to stay under 10 percent of saturated fat, 30 percent of fat and there is no trans fat allowed,” Palmer said. “We’re also supposed to cut down on sodium. Each year the sodium level gets a little less.”

Palmer said overall, most students have responded positively to the menu changes this school year.

Toohey said the Live Fit Coalition is excited to work with the different schools to educate kids on healthy eating and presenting fruits and vegetables to make them more appealing.

“If the fruits and vegetables at school are fresh and presented nicely and a child is willing to try it, then if they like it I’m sure they’ll let their parents know they want more,” Toohey said. “We just have to think outside the box.”