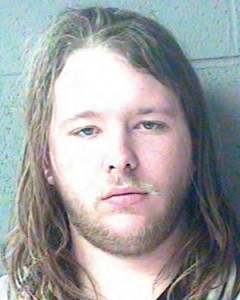 A routine traffic stop that turned into a vehicle chase and drug bust led to the arrest of a Tooele man Friday night.

Justin Badger, 24, was chased by deputies from the Tooele County Sheriff’s Office after failing to come to a complete stop at the intersection of Broadway Avenue and Utah Avenue and ignoring a police siren warning him to pull over, according to a probable cause report. As the officers pursued Badger, who was driving a green Dodge Neon, they saw him discard a black bag in the street. According to the report, the bag had a very strong smell of marijuana.

Badger came to a stop at Skyline Drive and Park Hill Drive, and was taken into custody. A search of the car, which also smelled of marijuana, found a gun holster, baggies and tin foil. Police recovered the black bag, which contained “a large amount of a leafy green substance,” a crystal-like substance, a brown powder, pills, morphine syrup, two digital scales and a gun magazine with bullets in it. There was also $1,974 in cash.

Officers retraced the route of the chase and found a gun about 25 feet from one place Badger had stopped while fleeing. The gun was listed as stolen from Grantsville.

A warrant was issued for Badger’s home in Overlake. Officers knocked on the door on Saturday afternoon and, after getting no response, forced their way into the house, which was unoccupied at the time. The Tooele County Drug Task Force has not released details of what was found in the home.

No charges have been filed against Badger yet. However, Badger has convictions for drug-related crimes in 2009 and 2010. His latest conviction, a guilty plea for third-degree felony possession or use of a controlled substance, netted a sentence of suspended prison time and three years probation.