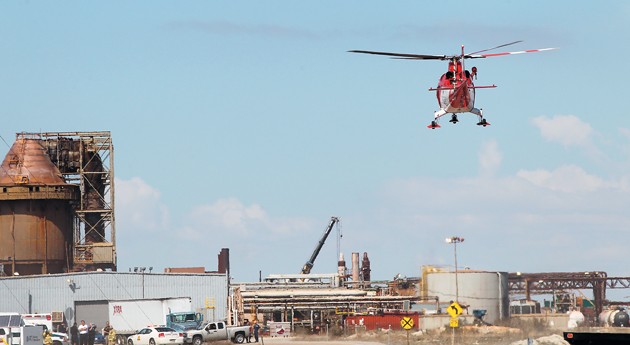 A helicopter takes off from the road near ATI and US Magnesium Tuesday afternoon. An explosion at ATI left two workers seriously injured.

Men were performing routine maintenance when blast occurred; incident is now under investigation by OSHA  ♦

Two ATI workers were seriously burned in an explosion at the titanium plant Tuesday as they were performing routine maintenance.

The two men, ages 38 and 53, were burned in a blast that occurred at Allegheny Technologies Incorporated shortly before 1:30 p.m. On-site ATI emergency responders initially treated them for burns.

As standard procedure, the men were also decontaminated because chemicals were potentially involved in the incident, according to a press release from Tooele County Emergency Management.

The men were transported by medical helicopter to Salt Lake hospitals with second-degree burns on their hands, arms, upper torsos and faces. The workers were reportedly performing standard maintenance operations at the time, according to the release.

The Occupational Safety and Health Administration is currently investigating the incident.

ATI, which is located next to US Magnesium about 20 miles northwest of Grantsville, mainly produces titanium and titanium alloys for use in aircrafts, jet engines, power plants, vehicles, medical equipment and other products, according to the company’s website.