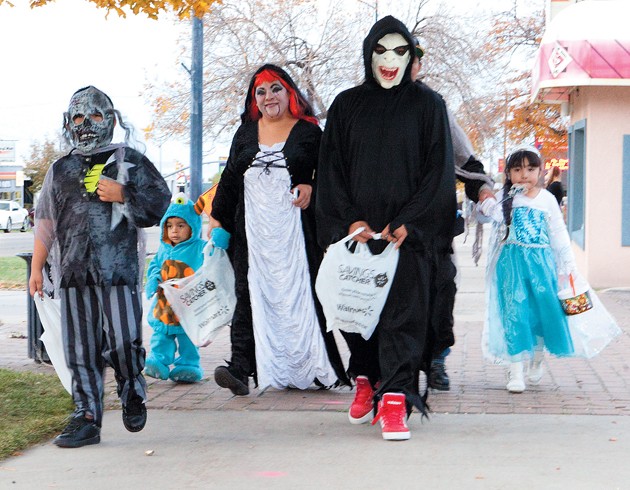 Retailers’ rush through commercialized holidays like Halloween is known as Christmas Creep. The Christmas Creep can annoy people who don’t appreciate months of build up between holidays.

If you were near seasonal sections of stores during the last week of August, you might have noticed a shift in the color palette as the back to school section shrank to oblivion.

It was beginning to look a lot — like Halloween? More than two months out from the next major holiday, stores were already doubling down on Halloween candy, trick-or-treat buckets and lawn decorations.

That’s not even including the newest fall ritual of pumpkin spice drinks, cookies, English muffins, candies and more.

For some reason, commercial culture is obsessed with racing toward the end of the year. It’s a well-documented phenomenon known as Christmas Creep, or in the former Gregg Easterbrook column The Tuesday Morning Quarterback, the Unified Theory of Creep.

We’ve adjusted our expectations so as soon as Halloween candy is on clearance, there will be a flood of red, green and snowflake motifs hard on its heels. It’s gotten so bad that forward-thinking gift givers could start their holiday layaway at Walmart on Aug. 27, a full two weeks ahead of last year and four months before Christmas.

Before you label me a Scrooge, however, let me say: I love Christmas. I love the cookies, the music, the beautiful decorations and goodwill toward men.

In fact, I’m more likely to annoy my wife as I rush to set up the Christmas tree with a stomach still bursting with turkey, stuffing and cranberry sauce. The approximate one month build up to Christmas is perfect; time to watch all the prerequisite Christmas specials, finish your shopping and just start to annoy people who can’t handle Christmas music playing at all hours.

It’s incredible that Halloween, centered around costumes and candy, has grown into the second-most commercialized holiday. I’ve had fun with Halloween in the past, especially making my own costumes, but the yard decorations, pumpkin lights and more have blown a holiday for children way out of proportion.

The Halloween stores that pop up in empty storefronts in shopping plazas are just another sign of the growth of the holiday. Cheap costumes, rubbery masks and cheesy lawn ornaments abound in the stores, which appear before the holiday and disappear a month later.

While we’re getting an early start on Halloween, the unstoppable march toward Christmas is already well underway.

Christmas Creep means Thanksgiving ends up lost in the shuffle. And that’s too bad, because I think it’s one of our best holidays. Any holiday built around giving thanks, eating too much food and watching football should be celebrated to the fullest extent.

Instead, we’re well on track to Christmas music and decorations appearing in stores even as the least popular Halloween costumes are piled onto clearance racks.

Now the calendar for retailers is essentially Valentine’s Day followed by Easter, then it’s on to the patriotic plates and napkins for Fourth of July. Then in quick succession it’s back to school, Halloween and Christmas.

With such a small window between Halloween and Christmas, perhaps Disney’s “Nightmare Before Christmas” was prophetic and we’re approaching a future where a skeletal Santa drives the sleigh and the presents are tricks or treats.

My biggest complaint about Christmas Creep is it can turn people against the most wonderful time of the year. We all have our limits, and some people can’t handle months of lead up to Christmas.

If the holiday continues to spread further into the rest of the calendar, it takes away from the importance of the Christmas season. We’re more likely to be fatigued rather than inspired by the time Dec. 25 rolls around.