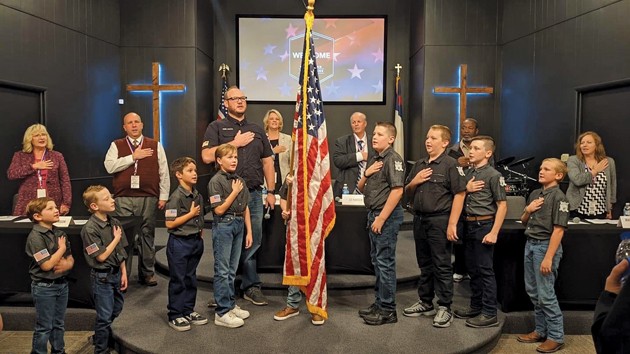 The Impact Rangers from the New Life Christian Fellowhip lead the Pledge of Allegiance at the candidates night on Tuesday evening.

New Life Christian Fellowship, a church in Tooele City, hosted a meet the candidates night to allow for churchgoers and members of the community to find out more about those running for Tooele City mayor and council in the Nov. 2 election.

Paul Smith, city planning commission member and a member of the church, addressed those in attendance by explaining how to vote and what would take place during the evening.

Smith explained that each candidate would be asked four questions about issues directly affecting the city and those living in the city, and they would each have two minutes to give their reply.

Prior to the questions, each individual running for mayor and the two open city council seats introduced themselves and explained what they believed to be the biggest issue the city was currently facing.

Maresa Manzione, Dave McCall, and Melodi Gochis, candidates for city council, all said that growth was the biggest issue.

Current mayor and candidate for re-election, Debbie Winn, said the biggest issue facing the city was keeping the city beautiful and a “wonderful place to live” for residents.

As far as growth was concerned, mayoral candidate Hansen said that having a balance with zoning was necessary for responsible growth.

Winn said that the city needed to have a plan for growth and Robinson agreed with her.

Manzione believes that public input is important with the issue of growth. McCall said that maintaining the rural community and preserving the city’s historical structures was important.

High-density housing, a highly popular topic, was the subject of one question..

Gochis said that high-density housing was important to obtain.

“We need affordable housing options for our teachers, first time home buyers, for our law enforcement officers, and other professional services in our community,” she said.

“We all know that we need higher density housing but none of us really want it,” Robinson said.

Manzione believes that a good plan is necessary when developing high-density housing.

“We have to have the rooftops to bring the businesses,” she said, speaking about developing more high-density housing.

McCall said that his biggest problem with high-density housing was quality.

“I don’t want us to jump and run and just do things, because this is what everyone is telling us to do,” he explained. “They need to build quality high-density housing.”

“We need to have open minds and as a public, be involved in the planning,” Hansen said.

Winn believes that there is room for different types of housing, including high-density housing.

“We do need to provide for all people,” Winn said. “Affordable is different for every one of us. Affordable means something different.”

The last question asked was, “What else can we do to secure more water for the city?”