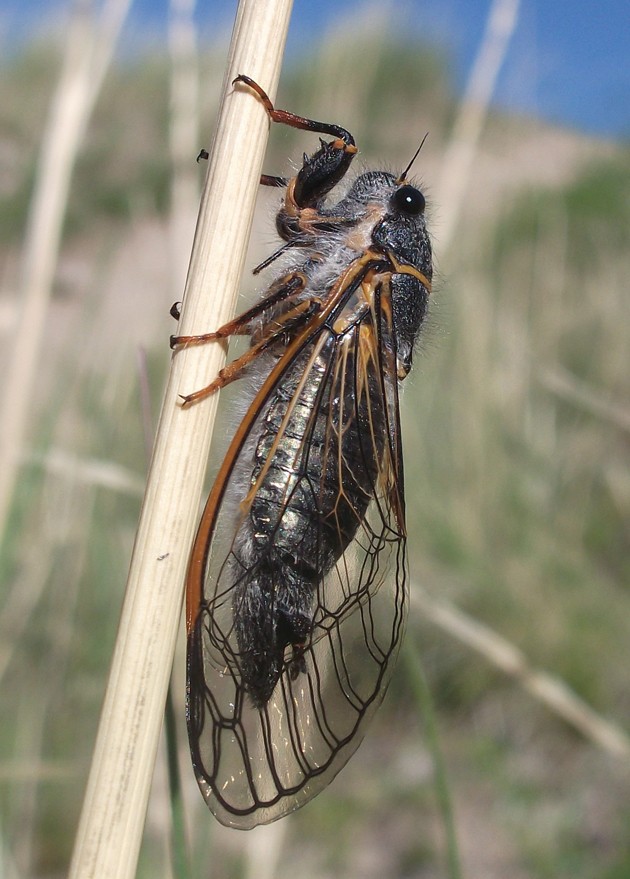 A cicada perches peacefully on some dry grass near the Settlement Canyon Reservoir.

The cicada name is derived from the Latin word meaning “tree cricket” and is most commonly known for its excessively loud song, which is intended for calling mates or confusing predators.

Cicadas, depending on the species, can vary in size from one to two inches in length and are harmless. They cannot bite nor sting; therefore, they are safe to hold. However, because of the adult’s diet of sap or stem liquids, cicadas have been known to mistake human limbs for tree branches. Doing so, they will sometimes attempt to land on people and inflict them with their proboscis, but will take off once they figure out their mistake.

Depending on the species, most cicadas have short lifespans. Adults usually live 14 to 40 days, so the cicada’s song is mainly intended for attracting mates. As males are the only ones capable of singing, they will call out to attract a female, but because of the loudness of their own song, they will desensitize their own hearing so they don’t deafen themselves. Although females are incapable of singing, they are still able to produce sound, and do so by flicking their wings and making a clicking-like noise. This is their response to when they hear a male of their own species singing. As a matter of fact, a cicada’s song can sometimes be heard up to a mile away. It has also been claimed that cicadas are capable of causing human deafness if one were to sing directly outside the ear. In comparison, their song can be as loud as a lawn mower.