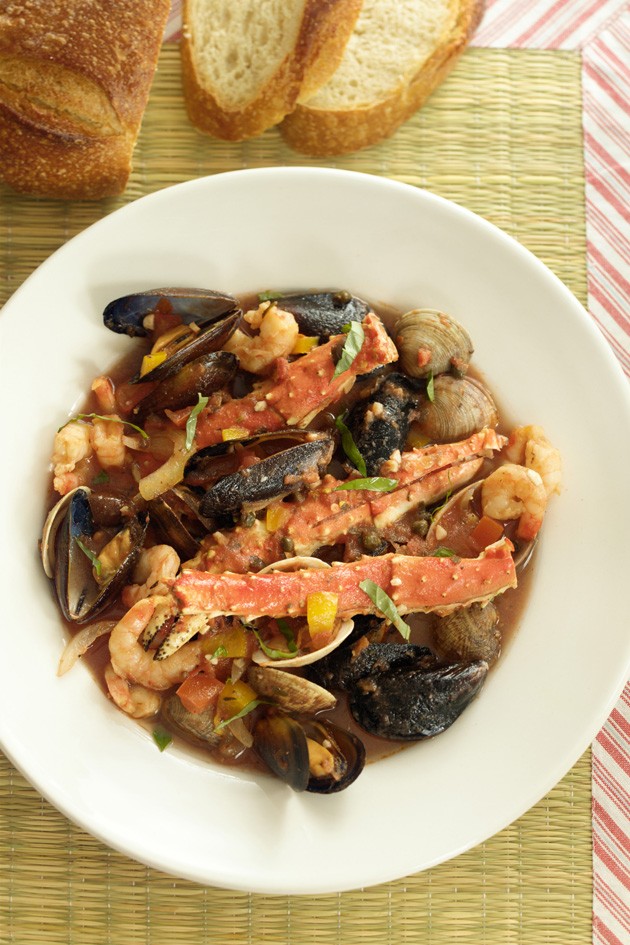 Native San Franciscans will tell you that cioppino (pronounced cha-pee-no) hails from the North Beach section of town and was originally made by Italian-Americans (some say Portuguese). As one legend has it, the name was derived from the cry of pre-World War II wharf cooks coaxing fishermen to “chip in” some of their catch to the communal soup pot. Other people say that “cioppino” is a local version of ciuppin, a Genoa word for “fish stew,” or that it’s a corruption of suppin, which means “little soup.” Despite its impressive appearance, this simple stew, featuring shellfish cooked and served in their shells, is surprisingly easy to make.

“The ‘catch of the day’ is still the spirit behind cioppino,” says Executive Chef Romero Miraflor of Spenger’s Fresh Fish Grotto, which has been serving fresh fish for more than 100 years in Berkeley, Calif. Although the recipe hasn’t evolved too much from its origins, Miraflor says, “It varies from place to place as everybody has their own preference on what kind of seafood should be included.” Although he asserts that tomatoes, tomato sauce, red wine, Italian herbs and seasonings, peppers, Dungeness crab, and garlic are essential elements, Miraflor encourages home chefs to “use what is in season, local fish whenever possible, and whatever is fresh.” He adds, “The inclusion of our wonderful local Dungeness crab and other local species is really what make it a San Francisco specialty.” Be sure to serve with red wine, crusty warm bread to sop up this rich stew, and plenty of napkins.

The base for the soup can be made ahead of time, and the seafood added to the hot base and cooked to completion just before serving. Cioppino is not one of those soups that tastes better the next day. Adapted from a recipe by Executive Chef Romero Miraflor, of Spenger’s Fresh Fish Grotto, Berkeley, Calif., whose original version also includes 1/4 pound calamari. If you decide to use it, add at the end to avoid overcooking.
1 tablespoon vegetable oil
1 pound Manila clams
1 pound black mussels
4 crab legs
2 tablespoons chopped garlic
1/4 onion, thinly sliced
1/4 cup chopped bell peppers (red, yellow or green)
1/2 cup diced tomatoes
3/4 pound medium shrimp
1/2 cup red wine
1 1/2 cup hearty reduced-sodium tomato sauce
1 3/4 cup reduced-sodium chicken or fish stock or broth
1/2 teaspoon salt
1/2 teaspoon oregano
Freshly ground black pepper

Look for Relish magazine, celebrating America’s love of food, each month in the Tooele Transcript-Bulletin. For more Relish recipes and to sign up for our newsletters, log on to relish.com. To download our new Relish For Moms digital edition and Relish Daily Dish phone app, go to relish.com/mobile