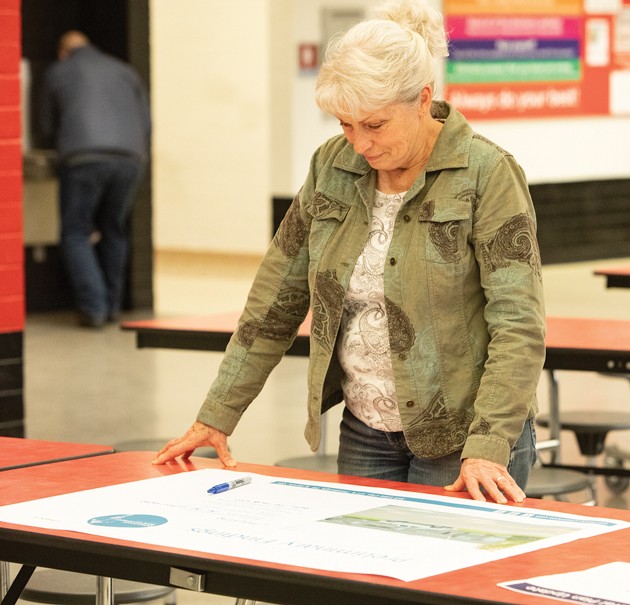 Sandy Stapley looks over the housing findings at the Grantsville General Plan meeting on April 15. The Grantsville City Planning Commission continues to review and suggest changes to the proposed plan.

Grantsville City Planning Commission members will continue to review and suggest changes to a new General Plan before they make recommendations to the Grantsville City Council.

The planning commission held a public hearing Tuesday night and discussed some possible changes to the plan, but tabled approving any final recommendations until its next meeting on Aug. 8.

“Take your time and when you feel comfortable, submit your recommendations to the City Council,” said Councilman Neil Critchlow.

Debbie Spilman recommended that Grantsville leaders should seriously refer to the new General Plan when approving any future land developments.

“Once this plan is adopted and approved, we need to stick to the plan,” Spilman said during the public hearing.

Spilman said she has attended several City Council meetings in the past and property developments always seemed to be “rubber stamped” by city leaders.

“I felt like it was a bit haphazard,” she said. “Whatever anybody wanted seemed to get approved.”

Spilman said the plan will represent what city residents want.

“This plan is everybody’s plan, not the City Council’s plan, or Planning Commission’s plan or Mayor’s plan,” she said.

The purpose of the General Plan is to provide a set of defined community visions or goals for the community to focus on for the next decade, according to the plan’s introduction.

Rural Community Consultants, with offices in Springville, have been working on the plan since last November. The consultants held three public meetings at Grantsville High School to gain input from residents.They also conducted an online survey and gathered about 430 online comments from residents.

“Typically we gathered everything we could and tried to write that down,” said Mike Hansen of Rural Community Consultants. “As the meetings continued, attendance dropped off.” He indicated that as time elapses people are beset with “planning fatigue.”

Hansen said people end up believing they have already been heard, or they feel they aren’t being heard at all and lose interest.

He said there were definitely some themes that played out during meetings and from a survey.

“People don’t want big apartment complexes. We didn’t see a lot of demand for small building lots either,” he said. “We heard a lot about equestrian trails, and we usually don’t hear that even when working with other small communities. … People want a rural atmosphere, but we struggle with the term rural. Rural seems to be in the eye of the beholder.”

Resident Frank Anderson said he has lived in Grantsville for 47 years.

Maria Spencer said she moved to Grantsville from West Jordan 25 years ago.

“We looked all over from Ogden to Lehi and decided on Grantsville and it has been amazing,” she said.

“Half-acre lots seem to be the norm now and I don’t think that says rural community and country,” Spencer said. “The rural community is what I moved out here for. It’s what I long for. Grantsville has been wonderful for the last 25 years. We’re not Tooele. We’re not Stansbury. We’re certainly not Salt Lake. I work in Salt Lake every single day and it used to take me 45 minutes to commute. Now it’s taking 90 to 100 minutes to get home.”

Kerri Anderson said Grantsville should slow down with residential development. She said if people want smaller lots, they can go to Stansbury Park or Tooele.

Mike Colson said Grantsville can’t shut the door on people who want to live in Grantsville on smaller lots.

“We need to make sustainable communities and minimize water usage. All we have are half acre lots because that seems to be a good compromise because it provides some open space. But it is not realistically sustainable for the future,” Colson said.

Fred Roberts said Grantsville has a nuisance code that should be enforced. He said unkempt properties with old parked vehicles and fire hazards are the norm in Grantsville.

“Vehicles have been parked in front of places for 50 years,” he said.

Roberts said a document was formulated several years ago about a nuisance code.

“The document is very, very good,” he said. “I believe we need more inspections made. Several properties are fire hazards. We’re in the middle of firecracker season and with these hazards somebody’s house could burn down.”

Bary Bunderson said people want a lot of amenities, but everything takes money to operate and maintain.

“This town has a nice feel. It doesn’t feel too busy — a feeling I appreciate,” Bunderson said.

He said if future commercial development is located in one place it could lead to traffic congestion with everyone trying to drive to one spot.

He suggested smaller commercial areas in various parts of the city to alleviate everyone heading to one area for shopping.