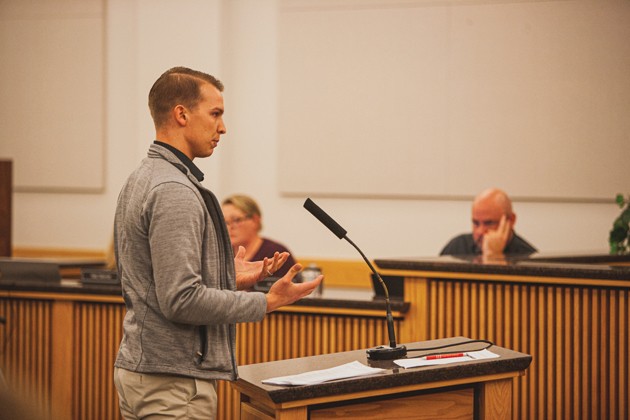 Peter Clegg, a representative from Valley Behavioral Health, came forward during the public hearing for a medical cannabis zoning amendment and expressed concerns about accessibility to cannabis during a City Council meeting at Tooele City Hall Wednesday.

The Tooele City Council unanimously approved an ordinance to City Code amending the zoning of medical cannabis production and pharmacies during a meeting at City Hall Wednesday.

The change was made by Tooele City Ordinance 2019-19, which proposed amendments to Tooele City Code Chapter 7-1-15 and 7-16 regarding the establishment of medical cannabis production and pharmacies. The ordinance restricts production of medical marijuana to industrial zones and marijuana pharmacies to general and regional commercial zone districts.

The ordinance was presented to the City Council by Tooele City Attorney Roger Baker. Medical cannabis is the subject of a recent initiative on a state ballot and Utah State Senate Bill 1002 during the 2019 first special session of the Utah Legislature, Baker said.

“The ballot initiative and subsequent state legislation legalized the production, sale, and use of medical cannabis in the state of Utah,” he said.

According to Baker, the state mandates that the city classify a cannabis production establishment for permitted use in all industrial and agriculture zones unless jurisdiction assigns it to one or more industrial or agricultural zones.

“We must allow a cannabis production facility as a permitted use in certain zoning. If we don’t specific one, it’s permitted in all agricultural and industrial zoning districts,” Baker said.

According to Baker, the state mandates that the city classify a cannabis production establishment for permitted use in all industrial and agriculture zones unless jurisdiction assigns it to one or more industrial or agricultural zones.

“The recommendation before you tonight is that we allow them for permitted uses in the industrial zoning districts,” Baker said. “Similarly, the permitted use for medical cannabis pharmacies to be in all commercial zoning districts besides residential and mixed-use. This ordinance is not about making a policy statement on medical cannabis. It’s simply implementing a state mandate.”

The meeting opened to a public hearing. Peter Clegg, a representative from Valley Behavioral Health prevention services, came forward and expressed concerns about the accessibility of cannabis.

“On a prevention standpoint as this moves forward, our concern is the increased accessibility of medical cannabis and its ability to be misused and what we’re asking for is for the council’s concerted support for our prevention services … so that we can ensure it’s being used medically as it’s been accepted by our voters,” Clegg said.

“On behalf of the council, the administration, the mayor and her staff, I think we agree with everything you’ve said,” said City Council chairman Steve Pruden.

“We are kind of obligated to go through with this but we are trusting that the Legislature will keep the reigns nice and tight on all of this so that it doesn’t mushroom out of control like you elaborated on,” Pruden said.

Pruden closed the public hearing and entertained a motion to vote on the ordinance. The council then moved to unanimously approve the ordinance.

Baker noted during the planning commission meeting on Nov. 13, which held a public hearing on the medical cannabis ordinance, there already is a cannabis cultivation facility operating in the city. The cultivator, Tryke Companies, is located at 1881 West F Ave., in Tooele City’s industrial depot district.