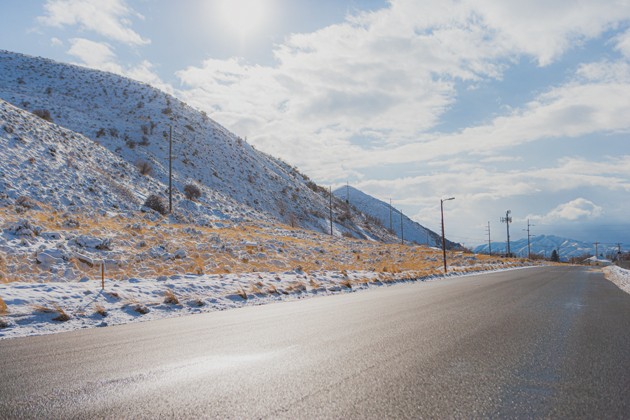 The Little Mountain hillside located at Skyline Drive near the intersection of Main Street. The Site was recently the subject of a zoning amendment request as part of a proposal to place a multi-family residential development at the location.

The Tooele City Council turned down a zoning map amendment request in conjunction with a high-density housing development during its work meeting Wednesday.

The amendment, requested by Steve McCleery of the Sanctuary Development Group, is for the proposed Skyline Vista subdivision which was to be located at 168 Skyline Drive on 14.23 acres.

The area, currently zoned R1-7, was requested to be rezoned to MR-16 Multi-Family Residential Zoning, as outlined in the application from the Sanctuary Development Group.

The purpose of MR-16 zoning, according to city code, is “to provide an environment and opportunities for high-density residential uses, including primarily attached residential units, apartments, condominiums and townhouses with limited attached single-family dwellings.”

The proposed development parcel is located at the base of Tooele’s “Little Mountain” which is a sensitive overlay area.

The amendment, recognized officially as Ordnance 2019-17, was reviewed by the Tooele City Planning Commission at a public meeting on June 12, 2019, and was negatively recommended to the Tooele City Council. During the meeting, commissioners cited traffic impacts and the property’s current designation as a sensitive overlay area as primary concerns, according to the official minutes.

Tooele City Code Title 7, Chapter 12, states that “the purpose of the sensitive overlay area is to provide regulatory standards, guidelines, and criteria having the effect of minimizing flooding, erosion, destruction of natural plant and wildlife habitat, alteration of natural drainages and other environmental hazards, and protecting the natural scenic character of the hillside and mountain areas.”

The Tooele City Fire Department gave a negative recommendation to rezone to the Tooele City Council prior to the work meeting, stating that fire hazards and the navigation of the terrain for emergency vehicles to fight a potential fire on the mountainside. In July of 2012, lightning sparked a grass fire on Little Mountain that approached homes on Tooele’s southeast bench.

During the work meeting, Councilman Scott Wardle stated that he will not be voting in favor of a rezone, citing that there are many environmental risk factors to the properties and its surrounding area, namely fire hazards, echoing recommendations from the Tooele City Fire Department as his main reason.

Councilman Brad Pratt also agreed with Councilman Wardle after reviewing the input from the fire department.

“I have a couple of other issues, first of all, I have been and I continue to be concerned about a sensitive overlay area,” said Pratt.

“I’m not going to waver away from that and having been on that mountainside multiple times the [terrain] is a significant concern of mine. Being on that surface, almost everything moves. There’s shale rock, there’s boulders and in my experience, I think that the surface of that is not as stable as we’d like it to be to put a development there. With that being said, I will not vote in favor of a rezone… It’s not a good location for a development at the foot of that mountain,” said Pratt.

Councilman Dave McCall also agreed, stating that we wouldn’t mind a development at that location, stating that he preferred something of a smaller magnitude than the proposed development, citing safety concerns.

“If it was a little further to the southwest where it isn’t so steep, I might be in favor of it then but there at the base might be just a tad too dangerous,” McCall said. “I remember when we had a fire up there and it is challenging for the fire department to get up there.”

Councilwoman Melodi Gochis echoed the same thoughts, citing traffic, density and environmental safety concerns, to which Council Chairman Steve Pruden also stated that he is not in favor, addressing the applicant, Steve McCleery, who was in attendance.

“I wanted to make sure you had your due diligence and that we had a chance to review everything,” said Pruden.

Pruden said he was confident that if the ordinance went forward to a public meeting, it would also result in a denial.