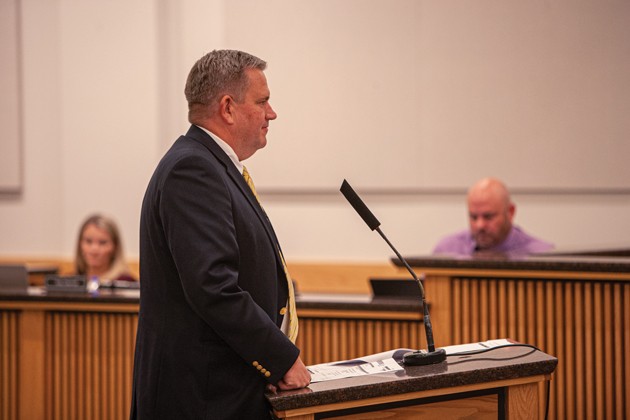 Tooele City Parks and Recreation director Darwin Cook speaks to members of the Tooele City Council about park and recreations projects during a meeting at city hall Wednesday.

The Tooele City Council approved agreements for the completion of a three park projects with existing contracts at a business meeting Wednesday.

The first park project presented to the City Council was a walkway for Elton Park at 400 N. Broadway and playground replacements for Parker’s Park and Gleneagle Park, located at 202 W. DiMaggio Drive in Overlake and 971 N. 600 West, respectively.

The resolution was presented by Tooele City Parks and Recreation Director Darwin Cook.

“I’m excited to be here this evening to enter into an agreement with England Construction to complete the walking path for Elton Park,” Cook said. “This is going to be a great feature for this park. It’s one of the older parks in the city and it does not have a completed pathway around it.”

The contract’s amount is $67,675 and the contractor is ready to begin construction upon approval from the City Council, Cook said.

“I think this is a wonderful thing and I’m so glad we’re getting this done,” said City Council chairman Steve Pruden. “It’ll be even more exciting if they’re able to complete this is in the wintertime so by spring, we’ll be up and running with new sprinklers, sidewalks, and pickleball courts.”

The City Council moved forward with unanimous approval of the agreement for the project.

Cook then presented an agreement with Big T Recreation of Draper, Utah, for the purchase and installation of new playground equipment for Parker’s Park and Gleneagle Park.

As outlined is Resolution 2019-83, “for patron safety and risk management purposes, it is necessary from time to time for the City to retire old, outdated, and broken playground equipment. The City administration desires to purchase new playground equipment for Parker’s Park and Gleneagles Park, which are in need of new equipment.”

“Approval of this contract with Big T Recreation is to replace some of the city’s aging playgrounds,” said Cook in a work meeting prior to Wednesday’s business meeting.

Cook noted that the parks are reaching a timeframe where they’re starting to become a safety hazard and the city has already had to close off or remove some existing features noted to be a safety hazard.

Big T Recreation has submitted a cost proposal of $202,112 for delivery and installation of the new playground equipment. The amount includes a $5,000 discount from the original price of $207,112 for free freight because of the multiple project order.