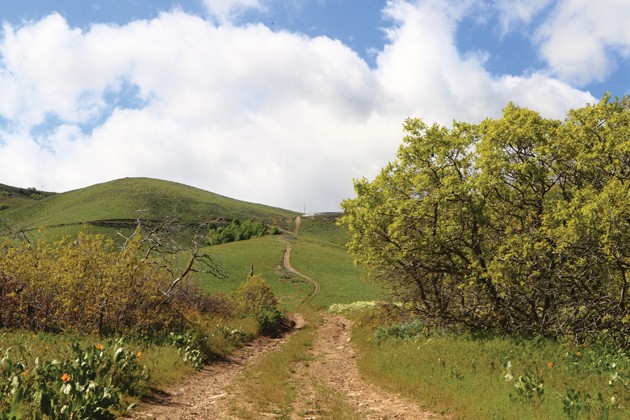 Tooele City intends to sell 31-acres (above) of a 55-acre parcel south of Skyline Dr. for residential developement.

March 22, 2018
City land south of Skyline to be sold for development

Land owned by Tooele City below the foothills south of Skyline Dr. may soon be sold because of improved market conditions and needed revenue.

The city council voted unanimously Wednesday to declare 31 acres of a 55-acre parcel south of 850 E. Skyline Dr. as surplus property and to make the land available for residential development.

The council made the decision after a public hearing on Resolution 2018-18 Wednesday night at City Hall. The resolution declares the land as surplus and authorizes its sale. No public comment was received during the hearing before the council voted.

Prior to the hearing, Tooele City Attorney Roger Baker explained to the council and audience that the city bought the 55 acres from Brockbank Family Holdings approximately 10 years ago. The purchase was made to preserve critical open space, hillside areas, and areas of existing water infrastructure.

But not all of the land was bought for that sole purpose, according to Baker.

“We knew at the time when we purchased that property that approximately 31 acres would be appropriate to surplus and sell for residential development because it is in the lower, flatter areas of the property that are not as critical for hillside open space preservation,” he said. “With the improving market, we bring this property to you [the council] tonight.”

He said both city and state law requires that a public hearing be held on the proposed sale. The land has been appraised, and the city administration proposes to sell the 31 acres for $560,000 plus $15,000 in costs the city is incurring to prepare the property for sale, he said.

According to the resolution, the city originally bought the 55 acres for $884,640. The city administration has identified 31 of the 55 acres are not necessary to protect the city’s interests and recommends the land be sold for no less than the appraised fair market value.

The resolution states that the 31 acres are desirable for residential development, and the revenue is needed for Tooele City governmental purposes. The document further states revenue from the sale will be deposited into funds from which the 55 acres were originally purchased.

It was not mentioned during Wednesday’s council meeting when the property would go on the market or if a prospective buyer or developer has already approached the city.