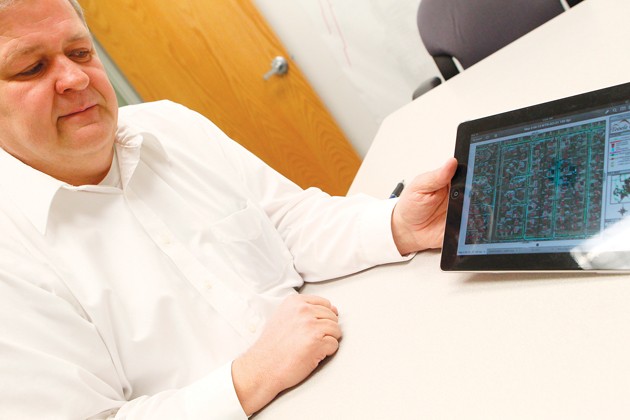 Tooele City Engineer Paul Hansen shows forms and maps that the city can access and fill out on iPads at the city building Thursday. The city hopes the use of iPads will increase the efficiency of its building and maintenance staff.

Plans to bolster Tooele City’s building and maintenance practices are in the works, and they all begin with one piece of technology: the iPad.

The iPads are to improve staff effectiveness and accuracy when it comes to things like conducting building inspections and reviewing project plans. Bolser said this will be the first step to increasing the city’s technological savvy.

Mayor Patrick Dunlavy said the plan is a pre-budget proposal for the 2013-2014 budget year, but it showed the city council what capabilities the iPads could give to city workers if the plan is approved this summer.

“One of my goals when I started working here [a year ago] was to find ways where we can be more effective and still be responsible to our citizens and the financial constraints we have,” Bolser said. “I didn’t want to reinvent the wheel, but I wanted to enhance what we’re doing. This really boils down to one effort to enhance five aspects, all based around the use of iPads.”

The first aspect is to remotely control the city’s Supervisory Control and Data Acquisition system, or SCADA system.

“SCADA is a computer system that controls all of our wells, tanks and sewer plants, as well as all of our safety settings,” said Bolser. “If there’s an alarm that goes off or something goes haywire, it would send an alert to the iPad. [If a supervisor] is home asleep and wakes up to an alarm going off at 2 a.m., they can reset the system right from their nightstand without having to come into work.”

The second aspect the iPads will be useful for is mobile mapping, he added. All of the city’s different utilities, such as water pipes, sewer pipes, storm drains and street lights, will be highlighted on a map of the city with different colors or symbols. Tooele City Engineer Paul Hansen said there are 250 mobile mapping images that comprise Tooele City.

“If we were to have this detailed of a map on paper, we’d have a book that would be half a ream of paper,” he said. “The other thing this allows us to do is when we’re out in the field, we can mark things right on the map and save it and email it back directly. It’s an interactive way to get to where we’re keeping the maps fresh and up to date.”

Bolser said one thing the city’s been trying to do is get utility mapping updated as well as possible.

“With this we can have the entire city’s mapping system, including utilities and addresses, at a finger’s touch for every inspector going out to do a civil or building inspection,” he said. “Right now they have to come in to the office, check our maps and then go back into the field and hope they remember where things are, or they have to print a map to take with them.”

Dunlavy said mapping out the city is important because currently, only a couple of workers in the water department have all the knowledge of the utility lines located within the city.

“I have been worried about mapping in our city, because it’s basically tied to two people in the water department and it’s all in their memories,” he said. “This technology takes us to a whole different level. This way it’s already updated, so it’s going to save time and we don’t have to rely on somebody’s memory. Anytime we’re out, we’ll know exactly what we’re dealing with, where [utility] lines are, and if we need to make corrections to the maps, they will be made right away.”

The third aspect that will be available on the iPads is project plans, such as blueprints for new buildings being constructed.

“As our building inspection crews go out to do inspections for projects that are under way, they will have access on their iPads to the actual approved plans,” Bolser said. “They can make notes right on the iPad, email it into the office and have changes reviewed and approved in a matter of a few minutes.”

Hansen said this way, workers can quickly answer questions about utilities, instead of having to go back to city hall to look up the plans.

The fourth aspect the iPads will be helpful for are building inspections. Bolser said currently, every time a building inspector goes out to inspect a structure, he has to take a log of papers that takes several minutes to fill out and give back to the owner. In addition, that log has to be manually filed at city hall.

“With the iPad, we’ve developed a couple of forms in Adobe software so that the forms can be filled out on the iPad,” Bolser said.

Hansen noted the owner of the building being inspected will be able to sign the form directly on the iPad and have a copy of the report emailed to them immediately. In addition, inspectors can take pictures of what they inspected and attach it to the document. That electronic file can also immediately be filed at city hall so that it’s available.

“This way we’ll also know when an inspection took place and it provides information to the contractor instantaneously,” Hansen said. “We don’t have to worry about scanning anything or having paper files.”

“It takes us 20 minutes to put in an inspection, but doing it this way it takes us less than five minutes. We can send [the report] in, and [the workers at city hall] can enter it and file it and then we’re done. We can come back in at 4:30 p.m. to do our clean up and be done by 5 p.m. every day. It’s just amazing.”

The fifth aspect the iPad will be useful for, according to Bolser, is for blue staking, or marking where water, sewer and storm drain pipes are located before someone starts digging in an area.

“Right now we get an email for a blue stake request, so we have to print it, take it out to the field, hope we understand what it says, and then mark the area,” he said.

In addition, the program also allows photos to be attached to show where marks were made and includes a calendar that lists exactly when blue stakes need to be done.

Hansen said this will be helpful to city workers when they are driving around town and notice people digging. They will be able to look up historical data to make sure the area has been blue staked properly.

“This will help us manage what’s happening on our streets,” Hansen said.

Bolser said the different aspects are just a fraction of the capabilities the iPads will provide to the city in the future.

“This is the first roll out and there’s a lot more possibilities to it,” he said. “The beautiful part of it from a financial standpoint is there’s an initial investment and then the maintenance throughout time is minimal.”

Bolser said the initial investment is largely for the set up of the software and the iPad hardware. The cost is just under $21,000. Bolser has estimated that the ongoing expenses each year will be around $3,300 annually. Dunlavy said the $21,000 will be put into the city’s 2013-2014 annual budget for the council to review and consider.

iPads will be given to the inspecting staff, water and sewer supervisors, blue stake staff, and Bolser for monitoring. The iPads will be programmed to only have work functions, so that they cannot be used for personal reasons.

Bolser said he also plans to make sure the iPads have covers and screen protectors since they will oftentimes be used at construction sites, and the iPads will be purchased with a 4G connection so that they will have Internet capabilities while workers are in the field. Hansen said if any of the iPads are lost or stolen, they can be wiped remotely so that whoever stole it wouldn’t have access to the city’s files.

“It’s imperative as we grow and do maintenance on our utilities that we have the ability to track them, understand what we’ve done, where things are and who’s doing what,” said Dunlavy. “This will save so much time. [Our workers] don’t have anything close to this [technology] now. It’s a really good thing.”

Bolser added, “The big thing for us is efficiency. Using iPads will save resources, time and effort, as well as cut down on vehicle maintenance and gas costs, and give empowerment to staff when they’re doing inspections. It also provides accountability.”