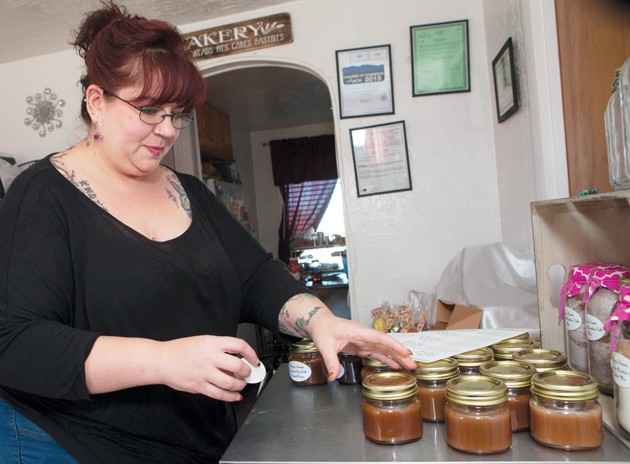 Sherry Petras labels the jars of caramel and chocolate sauce she makes as part of her home business, Sherry’s Sweets. The Tooele City Council recently approved a lower-fee permit for certain types of home businesses.

The Tooele City Council passed a pair of actions Wednesday that will lower the cost of starting a home occupation business.

Home occupation businesses are any business operated out of a home, said city attorney Roger Baker.

The most common home occupation businesses are salons, daycares and preschools, but such businesses could also include catering, attorney or accountant services, interior designing and more, Baker said.

Under city code, anyone who would like to run a business out of their home must apply for a city business permit. Business permits cost $40, plus $3 per employee, according to the Tooele City fee schedule.

In addition to acquiring a business permit, some home occupation businesses must also apply for a conditional use permit, or CUP. The fee for a CUP is one-time; once a business has its CUP, it doesn’t need to pay the application fee again, said Jim Bolser, director of community development and public works.

City planner Rachelle Custer added, “Only daycares and preschools [need a CUP] due to the adverse impacts that type of business may have on the neighboring properties.”

Prior to the meeting on Wednesday, there was only one type of conditional use permit established by city code. The CUP application fee was originally set at $75 but early this year, the fee was raised to $750 after a study was conducted of staff time and materials needed to process the applications.

The city council approved the new fee for conditional use permits during their Jan. 20 meeting.

Liz Hamilton, who has run a daycare business out of her home for 24 years, first realized the fee had changed when her neighbor decided to start a childcare business in her home.

Baker brought the issue to the council’s attention during a public work meeting on Sept. 21. As Mayor Patrick Dunlavy and the council members discussed the fee, the general consensus was that it was too high to reasonably expect a small, home-run business to pay.

At the end of the discussion, the city council asked Bolser and the members of his department to look into ways to reduce the fee for home occupation businesses. That’s when Bolser came up with the idea to establish an administrative CUP.

“Essentially, [administrative CUP applications] would be reviewed by staff instead of the planning commission,” Bolser told the city council prior to the vote on Wednesday. “There would still be a public comment period and conditions attached to the permit.”

Hamilton urged the council to establish an administrative CUP during the public hearing for Ordinance 2016-18, pointing out the high fee could deter some people from registering their business legally with the city.

In addition to owning a daycare business, Hamilton is president-elect of the Professional Family Child Care Association of Utah.

While the administrative CUP was established with childcare and daycare businesses in mind, it could be expanded to include other types of business as well, at the council’s discretion, Bolser said.

“It’s been written so it can be expanded to include other types of CUP permits down the road if the council chooses,” he told the city council on Wednesday.