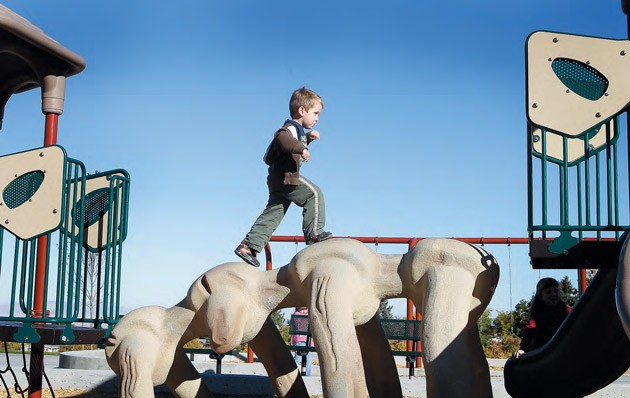 Christian Squire runs across the playground equipment at the Skyline Nature Park Thursday morning in Tooele. City officials are strongly urging voters to renew the Parks, Arts and Recreation Tax.

With Election Day less than three weeks away, Tooele City officials are putting on a full-court press to convince voters to renew the city’s Parks, Arts and Recreation Tax.

The PAR tax is a 0.001 percent sales tax the state allows the city to collect. Money collected is to be spent solely on parks, recreational and cultural facilities, and cultural organizations and events like the Tooele City Arts Council and Fridays on Vine.

The PAR tax was put on the ballot and voted for in November 2004, and went into effect for eight years starting in April 2005. In 2004, 57 percent of voters voted for the tax. Due to the Legislature changing the state statute governing it, the PAR tax will remain for 10 years if voters renew it this election.

The Tooele City Council is the only body that is allowed to make decisions about how to allocate PAR tax funds. Tooele City councilman Steve Pruden said the council typically appropriates about 45 percent of PAR tax money annually to the Tooele City Arts Council, which uses the money to fund community art classes, concerts and local plays and musicals. This year, a total of $175,000 in PAR tax funding was allocated to the arts council.

The rest of the money stays in the city’s budget to fund parks and recreation projects. Those PAR tax monies are spent only on upgrades and improvements to parks. Tooele City Mayor Patrick Dunlavy said due to state statute, the city is not allowed to spend PAR tax money on park maintenance, salaries or administrative costs.

Dunlavy said the costs of administering the PAR tax program are minuscule. With the exception of the design of Skyline Nature Park by a contracted landscape architectural firm and paying the city’s art class instructors, he said no other costs are associated with administering the program.

Every entity that receives money has to submit how they spent the money given to them by the arts council. The arts council then has to take that to the city council, making everyone accountable, Pruden said.

If the PAR tax is renewed, the city will focus future revenues on two major projects: enhancing the Fridays on Vine concert series and re-creating the master plan for England Acres Park so that work on it can continue.

Dunlavy said the England Acres Park master plan was completed about 15 years ago. However, the planned 25-acre park only has six acres finished so far. Because things have changed over the last 15 years, Dunlavy said the park needs a new master plan that will incorporate elements the community needs now.

“At the time we did the original master plan, the cost was going to be over $7 million. That’s got to change, so we are going to start over with a new plan. The park will be evaluated with other projects that the PAR tax can be used for. If it passes, planning will go forward. I don’t want to give the impression that all of the future money will go to complete England Acres. We will look at all uses for the money when the election is over.”

“Cities don’t do large grass areas anymore because of water issues, so we’ll be looking at all of that,” Dunlavy said. “Another thing we’ll change is not putting in so many baseball fields. There is a relatively small pavilion there, but we want to put in large pavilions so we can get the maximum amount of people using the park.”

Pruden said the park will need to be constructed in several phases, but putting in soccer fields instead of baseball fields is just one step the city will make to keep the cost of the park down. Dunlavy said the decision to change the park’s master plan is driven by both changing tastes of the community and ways to keep costs down so the park can be completed sooner. Because soccer fields are basically large grass areas, and baseball fields are designed with infields, base paths, backstops, dugouts and fencing, their cost is much less, Dunlavy said.

“We want to build parks that fit the needs of the community, but we also want to maximize every dollar,” said Tooele City Council chairman Scott Wardle.

Wardle said the council doesn’t want to put the cart before the horse on new projects that will be funded with the PAR tax, if it’s renewed.

“We don’t want to put the cart before the horse yet, because if we say we want to do all these projects it would be premature to do that until we make sure the citizens want [the tax to be renewed],” he said.

Pruden feels like the PAR tax in Tooele generates enough money to make the quality of arts and parks in Tooele comparable with other cities of similar size in Utah.

“We came from nothing,” he said. “When we were first proposing the PAR tax, we had hearings and citizens came and said they wanted art classes, concerts in the park and all those things that fall under the umbrella of art.”

Tooele City councilman Brad Pratt said other communities have told Tooele City officials that they’re envious of what the city is able to do because of the PAR tax.

“We have this ability to put on the best concerts and events, which is a direct result of the PAR tax program,” Pratt said.

According to the Utah State Tax Commission, a total of 19 cities in Utah have some form of PAR tax.

“I would match our parks and facilities with any other city our size,” Dunlavy said. “We exceed most in terms of park conditions and the amenities that are in the parks. The uniqueness of the park we just built [Skyline Nature Park] is getting statewide notoriety because of the open space and naturalness it provides.”

Dunlavy said some cities, like Grantsville, choose not to have a PAR tax because they wouldn’t generate much money through it. Other cities, like Stansbury Park, don’t have a PAR tax, but they have taxes that are used specifically for development of their parks.

Dunlavy said the city does use general fund money for parks when it’s available.

“Unfortunately, those monies have not been available the last several years due to the recession,” he said. “Like any allocation of monies, you must set your priorities. PAR money allows on a small scale to do projects when general fund money is not available.”

Dunlavy said the whole goal of this year’s PAR tax marketing campaign is to educate and inform voters about the program.

“Our goal is to educate voters in what we believe the community deserves,” he said. “They’ve trusted us with their tax money. We could easily not do anything, but we feel the PAR tax is important and it allows us to show people what we’ve done with their money. It’s a huge return on investment.”

Chris Sloan, chair of the Tooele County Republican Party, said because the PAR tax is a non-partisan issue, it’s not one the party has addressed, however, he feels like the program is beneficial to Tooele City.

“I think it’s one of those programs that is a benefit for the community,” he said. “Contrary to the opinion that’s out there that Republicans are anti every tax, this one is easy to show a tangible benefit to the people.”