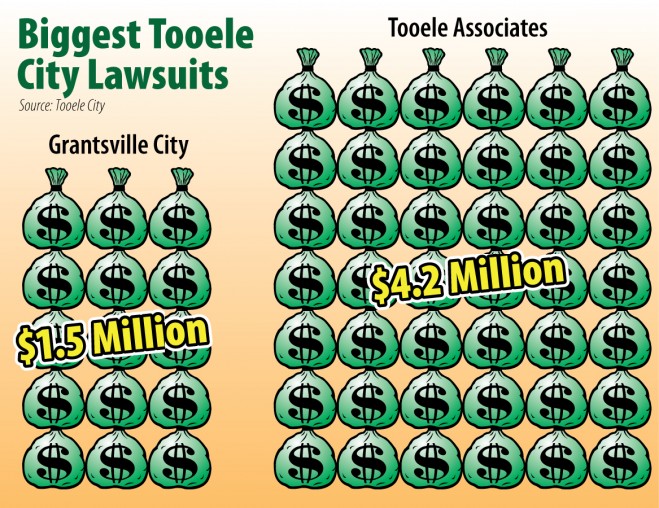 That figure includes outside attorney fees, court costs, expert witnesses, and costs of discovery — a pre-trial phase that allows opposing parties to obtain evidence from each other through copies of documents and depositions — related to the city’s defense against the lawsuit filed in 2002.

“The largest driver of costs was simply the enormous amount of time it takes to litigate a complex commercial case,” said Roger Baker, Tooele City attorney. “Discovery was extensive due to the large number of documents and witnesses involved.”

Records obtained by the Transcript-Bulletin under a Government Records and Management Act request show that from the filing of the suit through the end of 2009 — the year a jury rendered a verdict awarding Tooele Associates a $20.7 settlement — the city spent $3.5 million on the lawsuit. Since 2010, as the city opposed an appeal by Tooele Associates to overturn a mistrial ruling in the 3rd District Court trial, it spent an additional $652,000.

“That [total] figure doesn’t make me happy,” said Patrick Dunlavy, Tooele City mayor. “But then, neither does paying $20 million.”

The figure does not include time spent on the lawsuit by the Tooele City attorney’s office or other city employees.

On Aug. 2, the Utah Court of Appeals issued a ruling voiding 3rd District Judge Randall Skanchy’s 2010 declaration of a mistrial in the Tooele Associates versus Tooele City case. Skanchy had found irreconcilable conflicts in the jury’s verdict, while the Court of Appeals said the differences were reconcilable and remanded the case back to Skanchy for final judgment.

The Tooele City council has several options as they consider the next step to take in the legal process, Dunlavy said.

While the jury returned a verdict, that verdict is not binding until the judge that presided at the trial weighs in and enters a final judgment. After final judgment, Utah law gives government entities the right to appeal an adverse final judgment.

Which of these alternatives the city will choose remains unclear.

“The City council is considering all of these alternatives,” Baker said. “The alternatives are not inordinately costly, especially when compared to the cost of going to trial.”