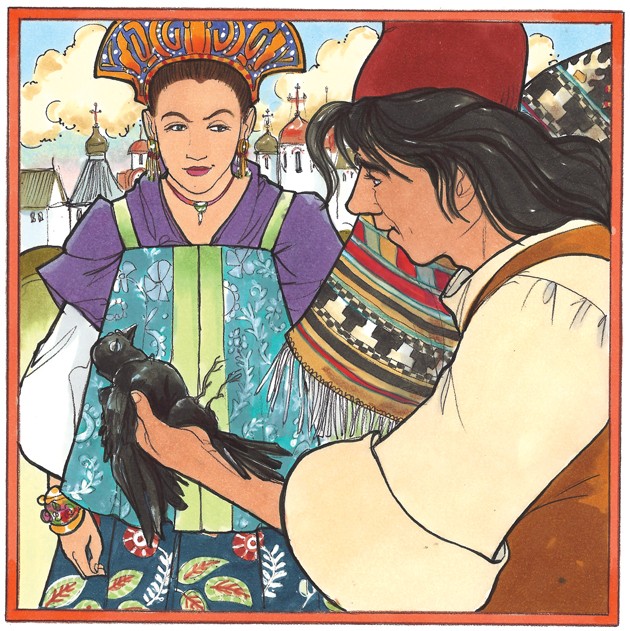 Once upon a time, a king had a daughter who was so intelligent, so wise and so clever that people shied away from her. She could confuse anyone, even the king’s wise men. And when it came to suitors, their knees shook when they tried to speak to her because the princess was so clever.

The king worried that his daughter would always be alone. One day he decided to issue a proclamation. He sent his servants out to kingdoms far and wide to announce the challenge. Anyone who could win an argument with the princess would win not only his daughter’s hand in marriage, but half the kingdom.

Young men came from far and wide to try their wit and wiles on the princess. Anyone could win an argument with such a sheltered girl — or so they thought. And day after day, they appeared and offered arguments and counterarguments to other arguments, but the princess always had the last word.

As time passed, the princess, busy preparing her arguments, had no more time to comb her hair or change her clothes, and the king was busy too. He greeted each suitor. He stood nearby and watched. And after a while, the suitors’ arguments became sillier and sillier. The whole endeavor exhausted the king.

“From now on,” he announced, “only serious men must apply! If anyone offers a silly argument, he will be punished!”

Soon the number of suitors grew smaller and smaller. But one day, a young, handsome beggar heard about the king’s challenge. He decided to try his luck. “What do I have to lose?” he asked his friends. “If I lose, I shall only be punished, and life already punishes me.”

He set off for the palace. As he was walking, he came upon a dead crow in the road, and because he knew this was some kind of sign, he stopped to think. Crows could be bad luck, but surely a dead crow meant the opposite. So he decided to take along this good luck charm, and threw the dead crow into his sack.

He had not walked far when he came upon an old bathtub lying by the side of the road. “You never know when you’ll need a bath,” he said to himself, and he dragged this along.

He decided whatever he found in his path, he would take along, and so as he made his way toward the palace, he collected a rug, a ram’s horn and a rusty flute.

The beggar was feeling cocky and prepared, though everyone he passed thought him a fool. That night, when he stopped at a farm and asked the farmer if he could stay the night, the farmer asked where he was headed.

“To woo the princess,” the beggar said.

The farmer and his wife rolled their eyes. “That will be trouble,” said the farmer.

But the beggar grinned and said, “I’ll win, I’ve no doubt. After all, I have a mouth under my nose and a tongue in my mouth, haven’t I?”

And the next day, he appeared at the palace. The servants rolled their eyes too, but no one could stop him, and so at long last he was presented to the princess.

“Greetings,” he said, “oh woman with hands of ice!”

She stared at him. “What do you mean by that? My hands are warm.”

She stared harder. “My hands are warm enough to roast a crow,” she argued, and the beggar grinned and lifted the dead crow out of his sack. “Let’s see!” he said.

The princess shook her head. She would not let a beggar make a fool of her. “I cannot touch this crow,” she said, “for if I do, he’ll roast, and the fat will drip upon the floor.”

“No problem then!” the beggar said. “We’ll catch the fat in this!” And he presented the bathtub.

The princess laughed, and the king smiled to see his daughter’s pleasure. “But that tub will leave marks on the floor,” she said, and the beggar only bowed. “We’ll set it on this rug,” he said, and he pulled the rug from his sack and set it beneath the tub’s feet.

The princess shook her head. She saw he was getting the better of her, and she said, “I see that you’re twisting your tongue!”

And so the beggar reached into his sack and pulled out the ram’s horn and said, “There is nothing more twisted than this, yet it is sound and fine!”

The princess studied the beggar and saw that he was sound and he was fine. Beneath the grime on his face there was a handsome lad, and beneath the shabby clothes there was a strong and able young man. And, oh, what a sense of humor! She loved that about him.

The beggar pulled the flute out of his sack, and he played a pretty tune. As the princess listened, she knew she was falling in love.

“And now he has won your hand in marriage and half my kingdom, too!” the king cried joyfully.

The beggar played a still more beautiful tune, and everyone lived happily ever after.