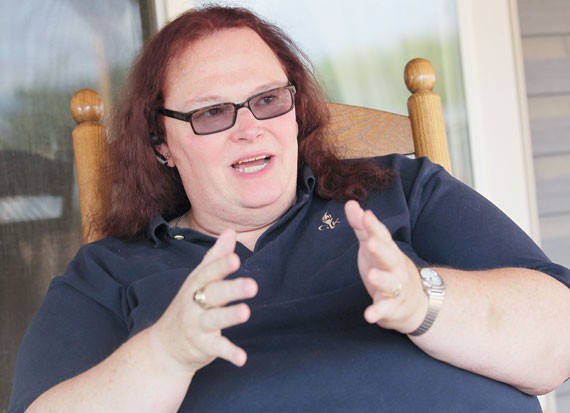 Nicole Cline talks about economic development and her job with Tooele County Wednesday morning at her home.

For years, Nicole Cline was at the center of economic development in Tooele County.

However, Cline’s 20-year career with the county, which included work as a computer network administrator, county planner and economic development director, came to an end on Sept. 22 as county commissioners chose to cut the economic development department she headed in response to a looming budget crisis.

On Wednesday morning, Cline, 56, was relaxing on the front porch of her Tooele home enjoying the sun before heading off to the University of Utah, where she is pursuing a doctorate in political science. She was accepting of commissioners’ decision to terminate her employment.

“Yes, I would like to keep my job,” said Cline. “But the decision to cut the department wasn’t a vindictive one, it was a business decision. Three people were trying to make the best decision they could about what to do in the face of a revenue shortfall to balance the budget.”

“It is a little like a company that is in trouble deciding not to promote its product any more,” said Cline. “It is really pulling your future to not have a person locally that is responsible to tell your story and let companies know that Tooele County is a place worth looking at.”

While county commissioners have said they will take the lead in economic development, Cline is not convinced that, with all the commissioners have on their plate, economic development will be able to get the attention it needs. Tooele County has some great strengths when it comes to attracting new businesses, said Cline. Those include a ready workforce and the ability to train them, easy access to a variety of modes of transportation, and land — lots of it and at low prices.

“One of the biggest changes in economic development in Tooele County has been workforce development,” said Cline. “Since I started to work at the county, the expansion of Utah State University’s facilities and the creation of the Tooele Applied Technology College have been big assets to the county. When I first started doing economic development, it didn’t go over too well when I had to tell companies that we could train their workforce but they would have to drive into Salt Lake City to do it.”

As far as obstacles to economic development, the largest hurdle that Cline said the county has to overcome is the perception of it as a toxic place.

“With the largest stockpile of chemical weapons, hazardous waste stored in the west desert, munitions stored at the Tooele Army Depot and Dugway’s past reputation, when businesses did a little research on Tooele County they often backed away,” said Cline.

The perception has improved since Cline first started her economic development efforts, and should continue to improve especially with the recent final destruction of the chemical weapons at Deseret Chemical Depot, she said.

“The best defense against the perception was to get people from a company to actually come and visit the county,” said Cline. “Once you could get them to look at the county, they found it to be an attractive place.”

Water and electricity have also been limiting factors in the past, but with the new Rocky Mountain Power transmission line through the county will come a new substation that will solve the electricity problem, Cline said.

Cline counts bringing in Allegheny Technologies to build a titanium plant next door to US Magnesium as one of her biggest accomplishments.

“We not only got a plant that now employs over 200 people getting paid more than the county’s average wage,” said Cline, “but also ATI is supplied by their neighbor, US Magnesium, strengthening and helping to keep US Magnesium’s 500 jobs in the county.”

Filed under unfinished business is a project that Cline has been working on for five years. Due to confidentiality requirements, all she can say is that the company manufactures paper products from wood pulp. If they eventually choose Tooele County, they will bring 1,000 jobs with them.

“Originally it looked kind of dim. The property owner they were working with wanted a high price for land, they needed 10 miles of new rail line built to the property and redundant power at a cost of $60 million,” said Cline.

Cline said she has found a new location that will require less rail line and will have greatly reduced costs for new power. She also found a company that will buy the steam produced by the plant to use in power generation, another company that will use the discarded wood pulp waste for their manufacturing process, and agricultural and other irrigation uses for the company’s estimated discharge of 2.4 million gallons of water per day.

“I’ve sent the proposal off to the company,” said Cline. “It is now in the hands of the commissioners.”

“A lot of that stuff out in the West Desert came there as part of federal Superfund cleanups,” said Cline. “That work is starting to go away and we aren’t supposed to be creating a lot of new hazardous waste Superfund sites so it is only natural that that source of waste will decrease.”

With the recruitment of Allegheny, household products distributor Reckitt-Benckiser and the Walmart Distribution Center, along with new industries recruited by Tooele City at the Utah Industrial Depot and the city’s commercial park, the county’s overall economy is more diverse than it used to be, but there still is more work to do, Cline said.

Tooele City and Tooele County have often appeared to compete with each other in recruiting new businesses. For example, in 2005, Walmart was looking at two sites within the county for their distribution center, one in Tooele and one in Grantsville. When the company announced the selection of Grantsville, which acknowledged help from the county in securing Walmart, there were rumors of discord between the city and county.

Cline discounts talk of competition between the two government entities.

“My relationship with Tooele City and Randy Sant, Tooele City’s economic development consultant, has always been more cooperative than competitive,” said Cline. “We work together and support each other’s projects.”

The county and city have taken differing approaches to economic development efforts. Cline worked as a full-time employee of the county while Sant is an outside contractor for Tooele City.

“There are a lot of consultants out there, and if you get a good one they can do a really good job,” said Cline. “Tooele City firmly believes they are getting their money’s worth with Sant. I don’t dispute that, but although I am biased, I prefer the in-house approach, using local people that live in and know the community.”

In 2006, Cline found herself in the middle of a political storm that wasn’t of her making.

Outgoing county commissioner Matt Lawrence, who had been bumped off the ballot at the Tooele County Republican Party convention, told media outlets he had been pressured by Joyce Hogan to demote Cline because Cline is transgendered.

“I don’t know what transpired between Matt and Joyce,” said Cline. “But I have never felt discriminated against or felt like somebody was trying to force me out.”

After the incident, Cline said she maintained a friendly relationship with Hogan, working together writing grants for the Tooele Valley Community Cooperative and on Tooele County Chamber of Commerce projects.

“I think there is still a lot of potential out here,” said Cline. “Currently our plans for the non-profit are to work with existing businesses and new businesses to help them grow and expand.”