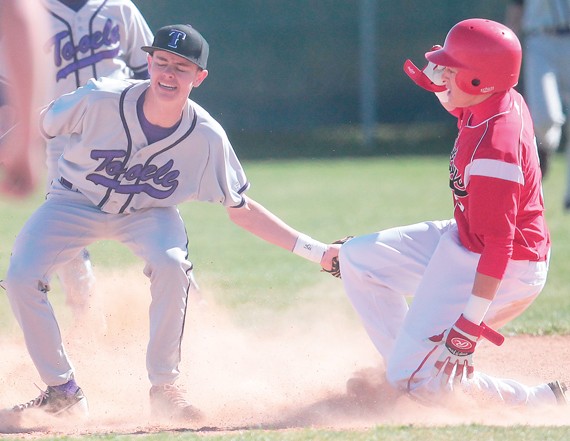 Senior Dalen Erickson and junior Skyler Cloward have become a dynamic duo on the mound for the Grantsville baseball team.

The Buffaloes still have a great shot at the playoffs with a 2-2 record with only one third of the region season complete. Tooele hosts Stansbury today and hosts Ben Lomond on Tuesday, April 10.

After three innings on Monday, Cloward had struck out seven and allowed only one hit. He continued his mastery on the mound for the rest of the game.

The Cowboys scored runs in four of their six innings at bat beginning with one run in the bottom of the first. Leadoff hitter Quinton Smith walked and scooted to second on a sacrifice bunt by Drew Sutton. Smith advanced to third base on a wild pitch and scored on a sacrifice ground ball by Cloward.

The Cowboys hit the ball hard in the second, but right at defenders. Erickson hit a hard line drive toward first base which was snagged by Butler and Jake Ortiz flew out to right.

Cloward mowed down Tooele hitters one-two-three again in the top of the third with three strikeouts while the Cowboys extended the lead to 2-0 after three complete. Smith drilled a single to left field and came around to score his second run of the game. After the single, he stole second, stole third and came home on an RBI single to left by Cloward.

The Cowboys widened the gap to 4-0 with a pair of runs in the bottom of the fourth. Manny Begay walked followed by a single from Erickson. Both Begay and Erickson ended up scoring thanks to a throwing error by the Buffaloes.

Grantsville extended the lead to 6-0 in the fifth. Cloward opened the inning with a deep blast to left-center for a double and Wyatt Smith came on to run for Cloward. Wyatt Smith came home on a sacrifice RBI grounder by Conner Turner. Kelby Landon reached on an a fielder’s choice and moved to third base on Tooele throwing errors. Landon scored from third on a sacrifice fly ball to center field by Erickson.

Tooele finally got on the scoreboard in the top of the sixth with a two-out rally. Tyson Vigil and Zach Coffman walked and Sanders smacked a single to score Vigil. Lane ripped a hit to score Coffman, but then Lane was thrown out on the base paths to end the inning. Grantsville led 6-2 heading into the bottom of the sixth.

Grantsville’s Fisher was able to advance to third base after a walk, stolen base and sacrifice, but was stranded there when Tooele reliever Coffman struck out Cloward. The Buffaloes were able to trim the final score to 6-3 when Justin Pollmann knocked the ball over the center field fence for a solo homer in the seventh with two outs. Cloward then struck out his 12th batter to end the game.

Chase Weishaupt pitched five innings for the Buffaloes and allowed six hits with only one extra-base hit given up with Cloward’s double. Coffman closed out the game for Tooele pitching the bottom of the sixth.