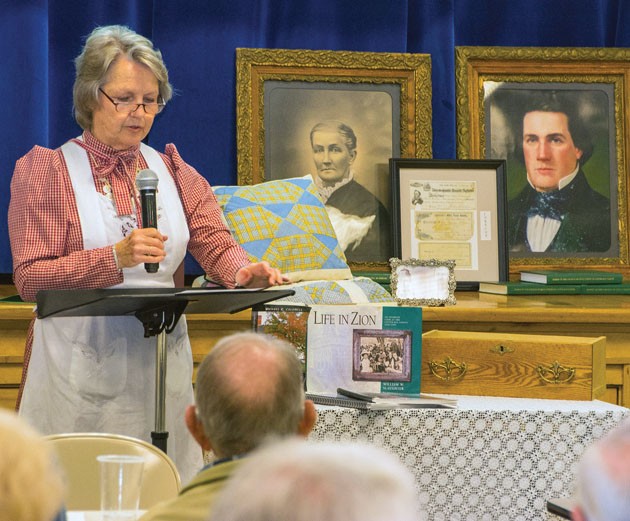 Surrounded by memorabilia, Carol Johnson Cluff shares her family history with the Settlement Canyon Chapter of the Sons of Utah Pioneers. Her family history started with two brothers, and other family members were some of the first leaders in the Church of Jesus Christ of Latter-day Saints.

Carol Johnson Cluff has been a busy farm girl, from helping deliver 700 calves on the Johnson Family Ranch in Rush Valley to sharing her family history with the Settlement Canyon Chapter of the Sons of Utah Pioneers.

Although Cluff lives in Tooele City, it’s only a 30-minute drive to the life she was born and raised into, and she takes every chance to participate in that way of life.

It all started in 1816, better known as the year without a summer, caused by ash from a volcano that blocked the sun and caused it to snow every month of the year, even in Vermont where the Johnson family was trying to eke out a living.

Like many farmers from the East Coast, the Johnsons left Vermont and traveled by sleigh to the Western Reserve in Ohio with eight children and pregnant with the ninth. Working throughout the winter, they were able to clear and plant enough land (costing the exorbitant price of $2 per acre) to start all over. By 1828 they had finished their house in Hiram, Ohio.

Like most homes today, the kitchen was the center of activity and Mother Johnson baked up to 18 loaves of bread per day besides pies and pastries. The correct baking temperature was decided by how long a person could stick their arm in the oven without it getting burned. Besides a wonderfully large home, they owned cows, orchards and gardens.  Life was starting to get comfortable again.

At that time there was a large revival of religion with preachers vying for converts wherever they could find them. A son, Lyman Johnson, was the first to accept the Church of Jesus Christ of Latter-day Saints when his Methodist minister asked him to read a new book called “The Book of Mormon.” Johnson was the first of the family to accept the gospel, and the remainder of the family joined this upstart religion after a miracle in which Mother Johnson’s arm was healed of arthritis.

By the end of that first year, over 400 people in the surrounding area had been baptized into the church. The Johnson home became the headquarters of the church for a time with as many as 40 people living there. Joseph Smith and others were tarred and feathered while living there, and received many revelations including the 76th section of the Doctrine and Covenants, which contains the account of the type of life that could be had after we leave mortality.

Lyman and Luke Johnson were some of the first Apostles of this new religion, and played a large roll in building the Kirtland, Ohio Temple. The Johnson family even sold their farm in Hiram, building a very modest home in Kirtland, and gave the remainder of the proceeds of the sale to the Temple Building fund.

Many adventurous and enlightened happenings followed the Johnson family wherever they went.  Their last stop was in Rush Valley, Utah in 1852. Their ranch that started with 40 acres now claims some 7.000 acres of rangeland. It is still a great time for the entire extended family to get together when the Johnson ranch, which has been handed down from father to son since 1852, needs extra hands to “Get Er Done.”

The next public potluck dinner and historic presentation will take place at the LDS Church at the corner of 200 S. 200 West in Tooele. Mike Rockwell will present the unvarnished truth about his relative and one of the most famous men in Utah history. Come hear the history and happenings of Orrin Porter Rockwell on Thursday, April 5. The potluck dinner is at 6:30 p.m. with Rockwell’s presentation to follow. And of course everything is free.