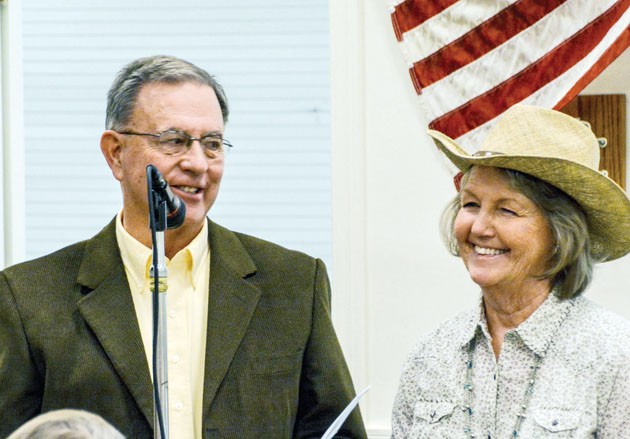 John and Carol Cluff share a lighthearted moment as they present the colorful history of Rush Valley, Utah, to the local chapter of the Sons of Utah Pioneers.

What do Onaqui, Shambip, Rush Valley, St. John and Clover have in common? According to John and Carol Cluff, they have been intermixed and shared different names for the same gorgeous geography we mostly nowdays call Rush Valley. Onaqui is the mountain range that starts at the southern boundary of the Stansbury Mountains. The two separate settlements in the shadows of these two mountain ranges in the middle 1800s were named Clover and St. John.

These communities came together at one time to be able to allow the government to bring in electricity. That community took the name Shambip for that purpose. Because of troubles with Native Americans, and to have a common place of worship, the LDS Church named the combined wards as the Rush Valley Ward. But to many locals, for a Clover girl to marry a St. John boy was tantamount to treason.

Both John and Carol Cluff were born in Tooele, but the girl became country and grew up in Clover, while John had more rock ’n’ roll and came to maturity in Tooele. That problem was solved when they were married in the Logan LDS Temple while John pursued a degree in electrical engineering at Utah State University and Carol pursued a career of working to put her new hubby through college. After living in several cities and states, they finally settled down in Tooele and raised six children, 20 grandchildren and even one great-grandchild.

Carol Johnson Cluff gets her maiden name from famed and early LDS Apostle Luke S. Johnson. In 1854, Johnson moved to about where the Hogan Ranch near Stockton is today, and finally set down permanent roots in Clover in 1856. He went from the calling of apostle to the calling of bishop, a maybe-never-happened-before situation in the church. Carol also draws her genealogy back to the family of George and Hannah Burridge. The Burridges were stationed in Malta with the British army. George heard the gospel preached by missionaries and Hannah heard the wonderful church choir and they became staunch and undeterred members. George was even imprisoned for a time for preaching the gospel while still in the army. Upon exiting the army and Malta, George was called to stay in Malta as a missionary. They eventually immigrated to Rush Valley in 1855 and he served as bishop there for over 20 years.

Local and lifetime resident Lacy Russell has written a history and produced a comprehensive video on this valley of many names. Russell said her love for history started as a little girl playing in some of these same abandoned houses that Carol’s ancestors built. In her young-girl imagination and wonderings, she just had to find out how these people lived and what their lives were like. This healthy curiosity has been the driving force in her historical research, writing and even documentary film making.

Some items of interest about Rush Valley, Clover, St. John etc., is that it once boasted the smallest post office west of the Mississippi River, and has had many postmasters and postmistresses over the years, usually serving the public out of their homes. The first church constructed In Rush Valley is out of native stone and workmanship and cost $2,700 in 1883. It was still in use for various community happenings until 1959. In addition to the church, a church granary was built so that local members could render their tithes and offering in kind instead of cash which was in very short demand. The valley’s first school was a simple dugout in a hill nearby a stream so the children and the horses they rode to attend school could refresh themselves after a hard day of book learning. The dugout later became a log school house, and finally a brick structure. These buildings housed grades 1-7 until 1971, when they were finally bussed into Tooele for school. Many locals resented this loss of control of their children’s educations, a situation that is ongoing in America today.

The Settlement Canyon Chapter of the Sons of Utah Pioneers thanks the Cluffs and Lacy Russell for their inspiring and well documented-presentation. Our presenter for the March 2 potluck dinner and educational meeting will be Clint Uddy, a representative from the church’s seminary and institute programs and happens to be in charge of developing greater understanding of the LDS Mormon Pioneer Trail. He will have photos and stories from both the Vanguard Company and the well known Willey and Martin Handcart companies. Be sure to join us for this rare presentation on Thursday, March 2 at 6:30 p.m. at the LDS Church located at 196 N. Pinehurst Ave. in Tooele.