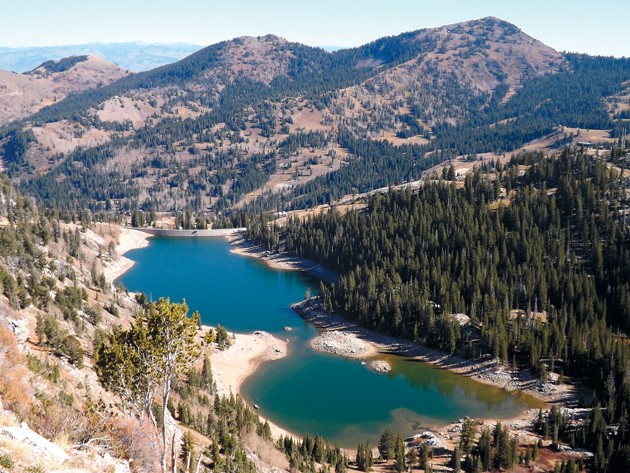 As seen from the pass, 10,721-foot Clayton Peak rises above the Brighton area and Twin Lakes Reservoir.

This Indian summer has provided the opportunity to visit the high peaks of the Stansbury and Wasatch Mountains on trails that are often buried in snow by now.

Last weekend, my wife, Mishelle, and I took advantage of the great weather and drove to Little Cottonwood Canyon in the Wasatch Mountains. I have always been interested in Alta’s mining history. While hiking there, I have noticed the signature of long-gone mining activities and wondered what the stories were behind those places.

So we decided to hike up a box canyon called “Grizzly Gulch” at the head of Little Cottonwood Canyon because it is littered with old mine dumps. Our target on this hike was the 10,479-foot-high Honeycomb Cliffs that loom over Grizzly Gulch.

To get to the trailhead, drive up Little Cottonwood Canyon past Snowbird and the Alta Town Offices to a large paved area where summer hikers park near the end of the pavement. There is no sign for this trail, but a footpath climbs up through the forest on the north side of the road almost directly across from the Albion Grill/Alta Lift Ticket Office.

The trail climbs steeply and then goes around a summer home and ties into a dirt road that makes several switchbacks up to a locked gate. The road you have followed to this point makes a sharp switchback to the west toward the Emma Mine area and the Cardiac Pass Trail.

Instead, walk around the gate and follow the old mining road up Grizzly Gulch. The road climbs steeply and the higher you go, the better the view of 11,132-foot-high Mount Superior. Mishelle and I hiked into the gulch and at one point, the trail passed between two large piles of mine tailings that were yellow-colored. There were also old mine cables, collapsed frame buildings, screen boxes, bent ore car tracks, boilers and other various mining equipment.

As we poked around some of the remains, prior research I had done about the area came to mind. Alta came into being due to a mutual association with Tooele County — Col. Patrick Edward Connor.

Just after the outbreak of the Civil War, federal troops abandoned Camp Floyd and left the Mormons alone in the desert. President Lincoln was concerned with continuity of communications via the transcontinental stage route, and with the prospect of the Mormons potentially aligning with the Confederacy, the 3rd California Volunteers were mustered out of Northern California and sent to Utah to protect the mail and keep an eye on the Mormons.

Connor, the fiery Irish commanding officer, had severe contempt for the Mormons, first because he wanted to take his command back east and participate in the battles in Virginia — but after repeated requests was denied. Secondly, he considered the Mormons to be in a state of active rebellion against the Union and despised the practice of polygamy.

Connor petitioned his commander and even Lincoln for authorizations to subdue the Mormons by force. Thankfully for all involved, his requests were denied. Connor didn’t give up though and he devised an idea that would flood Utah with gentiles and thereby loosen the grip the Mormons had on the area.

Connor realized that he had many men in his command who were skilled miners, so he sent dozens of men on leave to go prospecting in the mountains. Connors’ men discovered rich deposits at Bingham, Park City, Pioche, Alta and many other places. This tactic was quite effective as tiny mountain camps turned into raucous boom towns overnight, literally brimming with activities that were no doubt frowned upon by the church.

According to an article entitled “Alta’s Avalanche History,” author Mark Kalitowski states that on one occasion in 1865, some of Connor’s soldiers and their wives were on a picnic in Little Cottonwood Canyon when one of the ladies picked up an interesting rock from the stream bed that turned out to be high-grade silver ore. From there, the town and mines exploded and by 1873 there were 8,000 people living at the top of the canyon and the town of Alta contained 26 saloons to quench miners’ thirst.

Mishelle and I continued hiking the gulch and we passed the old caved-in portal of the Utah-Michigan Mine. The road wound up higher, following a string of power lines and then turned into a single-track trail that finally topped out on a pass between 10,500-foot-high Patsy Marley Peak on the south and 10,479-foot-high Honeycomb Cliffs on the north.

From this pass you have a stunning view of Twin Lakes Reservoir hemmed in by Mount Millicent and Mount Evergreen with the town/resort of Brighton far below.

On this cool, clear October day, we could see the snow-dusted Uinta Mountains on the horizon beyond the peaks of Park City. From the pass we headed north up a faint trail that climbed steeply through aspen, limber pine and Engelmann Spruce to the summit of Honeycomb Cliffs. Along this stretch, we flushed out a group of six mule deer and it was a pleasant sight to watch them bound off through the high mountain grasses and golden aspen.

The Honeycomb Cliffs are made up of the same white granite that looms above the Snowbird Cliff Lodge in the Hells Gate area and they drop off abruptly down into the Honeycomb and Mill Fork area of Solitude Ski Resort. As I climbed the mountains, I considered the geology of the area as described by Brian K. Jones who is a consultant to the town of Alta. Jones said, “During the Wisconsin period of glaciation, the Wasatch Range retained snow precipitation in such quantities that glaciers remained year-round carving out broad U-shaped valleys, dramatic headwalls, hanging valleys and steep gullies.”

All of these geologic features were on full display from the summit and we sat there awhile, eating lunch and enjoying the view while angry squirrels squeaked at us through the trees. I admired the small, papery spruce cones that littered the ground under wind-bent trees that survive there and thought about pioneer tales of old stumps 10 feet high and 6-8 feet in diameter that used to litter the hills. How mighty the trees must have been in these canyons before white man came and cut them all down.

In next week’s article, I’ll finish the trail description and discuss why this area is world-renowned for avalanches, being one of the first ski resorts established anywhere and a purported swindle of gigantic proportions at an old mine called Emma.