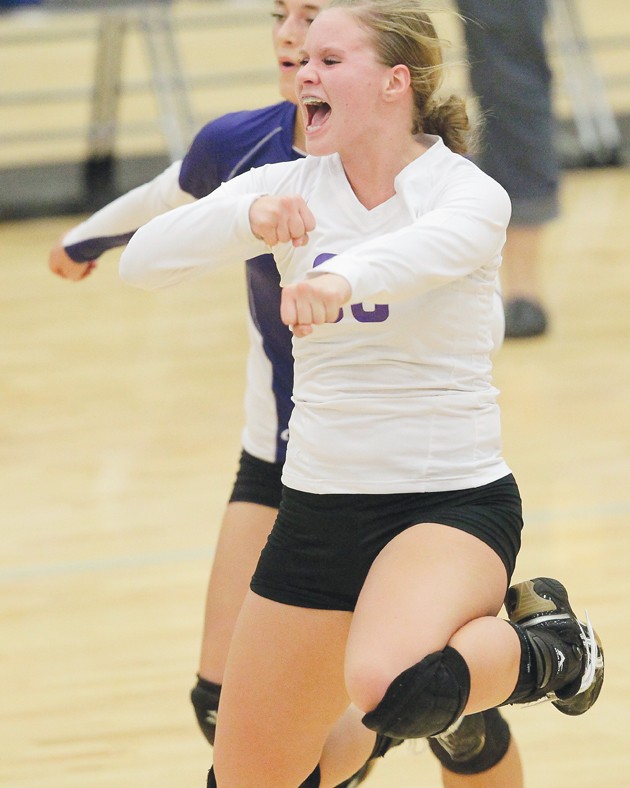 Tooele High School’s Madison Gibson celebrates after a point Sept. 4 against Stansbury. The THS volleyball players will receive instruction from college coaches at a camp this week.

The Tooele High School volleyball program has a camp starting Tuesday with the purpose of giving the players a taste of what it’s like to practice at the college level.

THS volleyball coach Kristi Brown said having the camp come here is great for the girls in the area because many of these girls don’t get a chance to go and attend these summer camps at the different colleges in the state.

“For the older girls, [the camp directors] bring an environment of intensity,” Brown said. “They help them quicken the game pace and improve their mental game. It’s good for the girls to be working at the next level. They weren’t used to that level at first when we started doing the camp, but now when I tell them it’s camp time, they’re excited for the camp.”

The camp is held for girls in the seventh through 12th grade. The older girls get a taste of college intensity by learning advanced skills, and the younger girls get a nice boot camp on the basics.

Brown said her junior high girls are much more raw when they come to the camp because of an under-developed junior high program, but this camp helps those girls get up to speed. She said the college coaches and players who direct the camp pay special attention to the younger girls to help them learn the basics of passing and communication.

“They do concentrate more on the basics,” Brown said. “Hopefully by the end of the camp they’re one step further.”

Brown said the camp is great for her as well because she gets a chance to see what her players are learning and how the college coaches operate. Once the camp comes to an end, she then takes the things her players have learned and keeps going over those drills.

“Last year, one of the coaches taught our girls how to do a triple block on the outside hitter,” she said. “We kept practicing it, and we were able to do that technique in a game. They learned how to do an advanced skill like that because of this camp.”

The hope is that having these college camp experiences right in their own back yard will help the girls become more competitive each year.

Brown said the price of the camp is half the cost of what it would be for the girls to go and travel to a volleyball camp at a college campus. The cost of this camp is $130, and it takes place Tuesday through Thursday. To sign up for the camp, go to the finance office at THS. For any questions, contact Brown by email at kbrown@tooeleschools.org.

“We’re excited to continue offering programs for kids in our community,” Brown said. “It’s great to give the girls in this area the opportunity. We’re excited for the upcoming season. We have a lot of returning players, so it’ll be interesting to see what this offseason holds.”