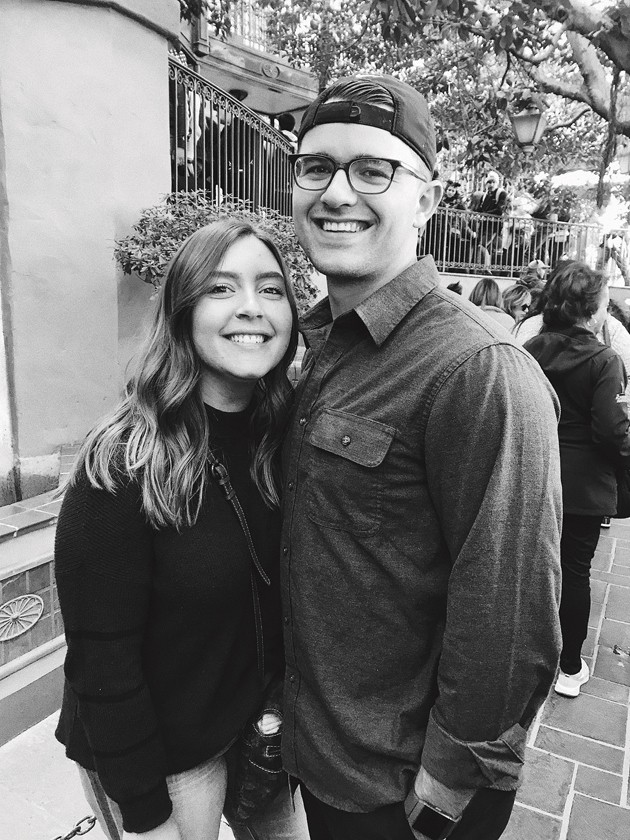 Devan and his sweetheart Meg pose for a photo as they wait in line for America’s favorite darkride, Pirates of the Caribbean, during a Disneyland trip on Feb. 11, 2019, in Anaheim, California.

October 24, 2019
Coming back home was easier than I thought

Making the transition from coastal life back to mountain town life was easier than I thought it would be. In fact, I think I preferred it all along. Southern California is usually only fun in small doses anyway, whether for the beach or the annual trip to Disneyland.

My name is Devan Gowans. I’m 23. My favorite band is the Arctic Monkeys and I love watching “Lord of the Rings.” Like my fellow man, I appreciate a nice cup of joe and I enjoy a wholesome meme.

You may have seen a few of my stories in recent issues, as I’m now the Tooele Transcript Bulletin’s discloser of all things Tooele City, criminal justice, law enforcement, and military.

I was born and raised in Tooele. I attended Tooele High School and graduated in 2014, splitting my tenure there between the band room, the dance floor as part of the Z-Motion ballroom dance team, and sophomore through senior class office for student government. Bear with me as I bring you up to speed with what I’ve done and where I’ve been in the last little while.

In September 2014, after graduation, I found myself in sunny San Diego dancing to the tune of a different beat as I stood on the renowned yellow footprints at Marine Corps Recruit Depot San Diego, ready to undergo three months of arduous training. It was just like all the movies portray it. With four shouting Smokey Bear hats (drill instructors) clouding your mental judgment every second of the day, it’s hard to stay focused on the goal, mine being an In-N-Out Double-Double and a crispy root beer to reward myself once I leave this place, but of course, my sights were actually set on the metal insignia handed to you at the completion of the training, the Eagle, Globe, and Anchor, which signifies your transition into a United States Marine.

In those three months, every time that I found myself slammed onto a footlocker followed by intense beratement by my favorite drill instructor, Sgt. Berryhill, I felt thankful for the sense of apathy that he allowed me to build. In a weird, sadistic way, I think this contributed to what I would consider mental strength. After all, he can’t hurt my feelings if I have none, right?

Needless to say, it was hard and it paid off. At the end of the training, I left with the title I was hoping for and I got to meet my family out on the parade deck of the recruit depot on Dec. 12 later that same year.

The next five years would be an adventure and one I’d never regret. In July 2015, I was assigned to I Marine Expeditionary Force at Camp Pendleton, California, as a mass communications specialist, or combat correspondent, like the character Joker from the film “Full Metal Jacket.”

While in California, and in true millennial fashion, I met a real hot number through social media: Ms. Megan Heaton of Stansbury Park. She was beautiful — she still is, of course. I slid into her direct messages faster than Boromir succumbed to the One Ring. For the next several months, Megan and I stayed up for hours falling in love over video chat. I knew she was the one for me. I’d say we were really put to the test for the next year after that.

In March 2016, I began a pre-deployment preparation period with the 11th Marine Expeditionary Unit and in October 2016, we embarked on our 7-month deployment. The journey saw me on the Department of Defense equivalent of a Carnival Cruise Line. For much of the deployment, I was attached to the Maritime Raid Force, the force reconnaissance detachment of the MEU, where I filled the function of a documentary photographer/videographer.

I’m proud to say that I was able to see and take part in important world events. As part of Operation Inherent Resolve, two of those events include the deployment of artillery units to Syria in the fight against ISIS, and the Raid on Yakla, a US-led Special Operations Forces operation carried out on Jan. 29, 2017, in central Yemen that was launched from the USS Makin Island (LHD 8), the ship I was attached to at the time.

Other places that the MEU led me to were Hawaii, Sri Lanka, Malaysia, Papua New Guinea, Dubai, and finally, the Horn of Africa in support of Operation Oaken Steel.

Rather important for the morale and general welfare of the Marines and Sailors aboard the ships was the “port call,” or when the Navy vessel that you call home makes berth in a foreign country. The port call meant that these lucky sea dogs were fortunate enough to shake out their sea legs for a day or two, which for me consisted of Dubai, Sri Lanka and Hawaii on the return journey. It was usually my chance to soak up some sweet Wi-Fi and LTE that I was deprived of at sea so that I could speak to my family and my long-distance lover over video chat.

When all was said and done on the other side of the world, I married Megan in Provo on Aug. 11, 2017. She travelled back to California with me where we built a quaint life by the sea with our rescued mutt, named Chalupa — yes, as in Cravings Box. As my contract with the Marines neared its end, I decided not to reenlist after some deliberating with my wife. On Aug. 23, 2019, I signed my DD-214 and we decided to move back to our beloved hometown.

Anyway, that’s the condensed version. As it stands now, we’re currently freeloaders, shout-out to Mom and Dad. Tooele isn’t what I would call a buyer’s market but we expect to be a little more permanent soon enough with a home of our own hopefully before Spring 2020, as I will be attending the University of Utah’s nursing pre-licensure track. We’re thrilled to be back in Utah, but most of all, we’re happy to be back with our families and we can’t wait to start rebuilding our lives here.

I’m beyond excited to be working here at the Transcript. My love for media arts stems from a romanticized childhood full of campy films and my time in the military where I stumbled upon a newfound affection for the art and skill of photography, cinematography, and writing. I’ve taken it upon myself to learn what I can from mentors and many hours of self-study to bring you the world through my lens/pen.

My award-winning portfolio has been featured by Business Insider, Task and Purpose, Stars and Stripes, and many other local national and international news organizations.

I have an affinity for the natural beauty of the Beehive State and the people in it. I would be honored to tell your story.