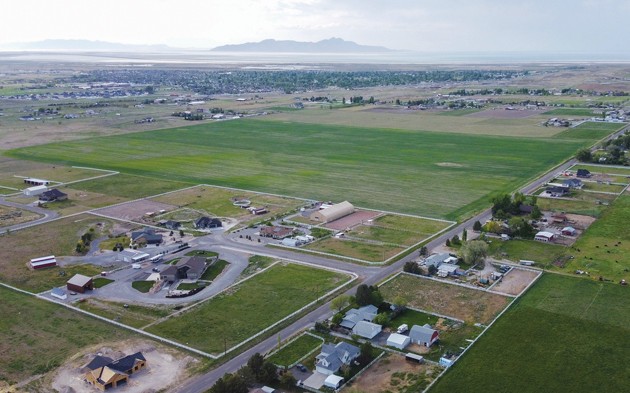 This aerial view, looking north and west, of the property developer Joe White plans to develop shows Droubay Road in the foreground.

The Tooele County Commission held a resolution that would have denied the appeal of the planning commission decision to approve a PUD-CUP for a development in Erda for a second reading during their meeting Tuesday night at the Tooele County Building.

They also decided to table action on a rezone request for the property that was involved in the appeal.

“I think we should table this due to the complexity of the issues, do some offline meetings and discuss this,” said Tooele County Commissioner Kendall Thomas.

Later in the meeting Thomas said, “Table this, bring it back and let Joe (White) decide what he wants to do … (the PUD-CUP or the rezone).”

At the request of Joe White, a local developer, the County Planning Commission approved a planned unit development – conditional use permit application for property west of where Clayton Road meets Droubay Road in east Erda during their Sept. 4 meeting.

The approved PUD-CUP plan called for 112 homes on a total of 113 acres. The site plan showed 76 lots of approximately one-half acre, 33 lots of 1-acre or larger, and three lots of one-third acre, with three agricultural preservation parcels totaling 19 acres and a 2-acre park.

A group of Erda citizens appealed the planning commission’s decision. The Tooele County Commission heard the appeal during their Nov. 19, 2019 meeting.

The agenda for the May 10, 2020 County Commission meeting included a draft of resolution to deny the appeal.

According to Tripp those reasons were; the Tooele County attorney gave the planning commission advice that was not heeded, they cited a flaw in the planned unit development ordinance, asserted that the PUD was spot zoning, traffic study was insufficient, claimed there were some provisions of the PUD ordinance that were not strictly followed, and that citizen comments at the meeting were not property represented in the minutes.

White asked the state Office of the Property Rights Ombudsman  to issue an advisory opinion on the merits of the appeal.

In reviewing a land use decision on appeal, a court will presume the decision is valid and will only overturn the decision if it is arbitrary, capricious, or illegal, said the Ombudsman office.

The Ombudsman office found that the appeal did not prove any errors such that the decision would be considered arbitrary and capricious or illegal.

“The third-party appeal fails to prove any error by the planning commission in approving the concept plan. The decision at issue in the Advisory Opinion approved the applicant’s concept plan. Accordingly, the County must now review the approved concept plan for code compliance under the preliminary and final plan steps of the approval process,” wrote Jordan Cullimore, lead attorney for the property rights ombudsman office.

The Ombudsman’s advisory opinion is not legally binding, however, if the matter is eventually litigated and the case is decided along the line of the Ombudsman’s reasoning, the county may be liable for court costs and attorney fees, according to County Attorney Scott Broadhead.

In addition to the Ombudsman’s findings, Tripp said that in reviewing the planning commission’s approval of the PUD-CUP he did find some things that were cause for concern.

Tripp mentioned that applications submitted for review to the planning office may not have been properly vetted, the planning commission did not receive materials seven days ahead of their meeting as required by code, and Tripp said he had concerns with procedures for public hearings.

After the PUD-CUP appeal was heard by the County Commission, White submitted another proposal for the property.

In the new proposal White requested a rezone for the property from RR-5 to RR-1.

The plan shows 70 homes dispersed over 80% of the property with the smallest residential lot size of 1.25 acres. The plans also show 8.1 acres of parks and 13.5 acres of roads.

This rezone request was heard by the Tooele County Planning Commission on May 1, 2019.

They recommended approval with the zoning condition recommended by planning staff to limit the density to 1 dwelling unit per 1.55 acres or 70 units total.

The County Commission held a first reading and discussion of the rezone request during their May 5 meeting.

A second reading and possible vote was scheduled for the May 19 County Commission meeting. next public meeting.

At the suggestion of County Attorney Scott Broadhead the County Commission decided to hold the decision on the appeal for a second reading at their next meeting to give Broadhead time to reword the resolution to include information discussed during the May 19 meeting.