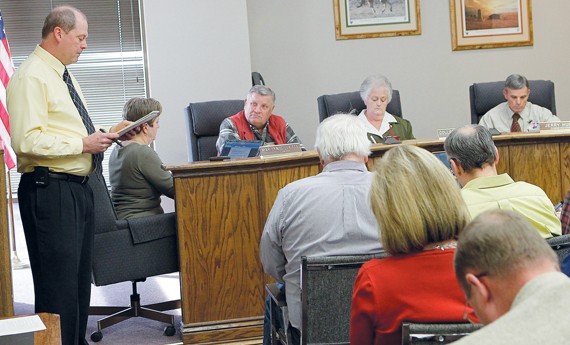 Tooele County Auditor Mike Johnson (left) talks about the 2013 county budget Tuesday. Included in the budget is an 82 percent increase in taxes.

Clegg on budget: ‘We’ll continue to look for ways to cut costs and be more efficient, but for now this is the best we can do’ ♦

“There is just no way to balance the budget and provide the services we are legally bound to provide without a tax increase,” said Johnson. “The county has not increased taxes for the last 25 years.”

Under the proposed increase, taxes paid on a $150,000 home in the county would go up by $88 a year, according to Tooele County Auditor Mike Jensen. The increase will yield an additional $2.6 million in revenue for the county.

The proposed tax rate will be subject to a truth in taxation hearing in August, eight months into the budget year, because before the new rate can be set commissioners must wait for the appraised value for real property as of January 2013 to be determined by the assessors office.

“The county has those eight months to either find additional cuts or increased revenue,” said Johnson. “If by August the county doesn’t need the full 82 percent increase, the proposed rate will be decreased. It can’t go up, but it could go down.”

However, even with a lower tax rate, because of its larger property tax base Summit County pulled in $14.6 million in property taxes compared to Tooele County’s $1.9 million in a year.

With the 82 percent increase, Tooele County’s property tax rate would be the 12th lowest among counties in Utah, ranking near Davis, Iron and Cache counties.

Even with the revenue generated by the tax increase, the combined expenses of all county funds in 2013 are budgeted to drop by $808,278, or only 1.4 percent from the 2012 budget. That’s deceptive, however, because buried in the total is a one-time $6 million Federal Aviation Administration grant which will be spent in 2013 to extend the Wendover Airport runway.

While the public health fund will remain essentially same with a 1.2 percent increase, due to increased grant income, other funds will see cuts ranging from a 28 percent reduction at the Deseret Peak Complex to a 2.4 percent reduction for Aging and Adult Services.

The debt service fund will go up by $1 million as the county begins paying back interest on bonds floated to build the new county jail.

The 2013 budget does not anticipate any additional cutbacks in staff to make expenses match revenue, as the county did in the last three months of 2012 when 50 people left county employment due to reductions in force, 28 employees had their employment status changed, and five employees were transferred to a different department.

The county commissioners, including incoming commissioner Shawn Milne, reduced their own salaries by $5,000 each for 2013.

The general fund, which includes the budget for county offices, public safety, courts and the Children’s Justice Center, public improvements, parks and recreation, economic development and transfers to other funds, is down 11.5 percent to $20.1 million, largely due to decreased personnel costs following recent layoffs and department closures.

The declining staff will mean a slowdown of services in most offices, Jensen said.

“We’ll continue to look for ways to cut costs and be more efficient, but for now this is the best we can do,” said Clegg. “With the decrease in revenue, the property tax increase is needed to balance the budget.”

The human services budget, which includes county relief services, the food bank and mental health will be cut 7 percent to $2 million — also attributable to a decrease in grant income, according to Jensen.

The Deseret Peak Complex budget will drop 28 percent from $3.6 million to $2.6 million largely due to decreased personnel and operating expenses, although Deseret Peak will receive a $1.4 million cash infusion from the county’s general fund.

The capital projects budget dropped 40 percent from $250,000 in 2012 to $100,000 in 2013. Capital projects included in the budget for 2013 include $50,000 for environmental studies for the Mid-Valley Highway which are funded by vehicle registration fees and $50,000 in administrative building projects, an amount reserved for potential repair work on county buildings, according to Jerry Hurst, Tooele County commissioner.

Looking at the revenue side of the budget, hazardous waste mitigation fees from the west desert, primarily consisting of fees paid by EnergySolutions, dropped from $5.9 million in 2011 to an estimated $3.7 million, and are budgeted at $3.8 million for 2013. This comprises 19 percent of the county’s total projected revenue.

If the proposed property tax increase is approved, mitigation fees will no longer be the largest single source of income for the county.

Property tax revenue is budgeted to rise from an estimated $1.9 million collected in 2012 to $4.5 million in 2013, making it the largest single source of revenue.

The transient room tax fund, which is collected through hotel and motel taxes and is earmarked for projects that promote tourism, is budgeted up 2.5 percent to $805,000.

The commissioners said they tried to conservatively budget income from federal and state prisoners housed at the county jail. The initial budget for 2012 called for $2.3 million in jail fee revenue while the budget for 2013 is for $876,000 in jail fees.

“We have been averaging around 50 federal prisoners the last couple months at the jail,” said Bruce Clegg, Tooele County commissioner. “We budgeted for a small increase in prisoners that may come from the state or the federal system.”

One casualty of the new budget may be the county fair.

“We have been told by parks and recreation that the county fair may have to go unless we can find an alternate way to fund it,” said Clegg.