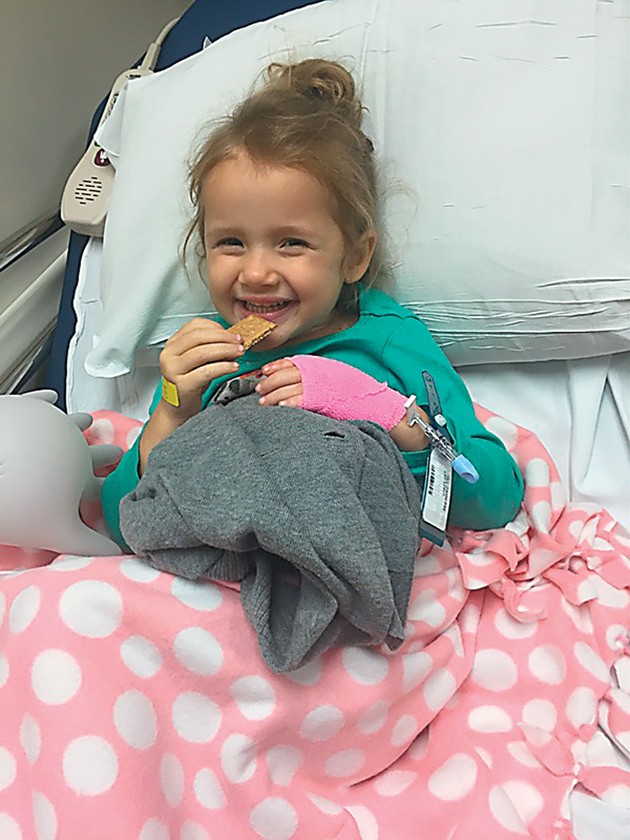 Local residents are holding a fund raiser for four-year-old Danni Hill. Hill was diagnosed with leukemia The above photo was taken the day the family learned of her diagnosis. (photo courtesy of Cassandra Hill)

November 9, 2016
Community reaches out to help girl diagnosed with leukemia

Members of the Tooele County community are rallying around a little girl who was diagnosed with leukemia last month.

Cassandra and Ray Hill recently moved to Tooele from Montana with their family. Cassandra Hill said they didn’t know anyone in the county before they arrived.

Their original plan was to stay only long enough for Ray Hill to complete a temporary job in Utah and then return to Montana. But plans changed when the couple’s four-year-old daughter, Danni, developed an infection in her leg.

“It looked like a spider bite,” Cassandra Hill said. “I took her in to see three different doctors in Tooele. Finally, the third doctor told me after a week of her not getting better and taking antibiotics, to go to Primary Children’s Hospital.”

At Primary Children’s, doctors examined Danni and tested her blood. On Oct. 1, the little girl was diagnosed with Pre-B Cell Acute Lymphoblastic Leukemia, which is essentially cancer of the blood, Hill said.

“I took her in there thinking she had a spider bite on her leg,” she said. “What I heard was way, way worse. For the first 30 days, we were really on pins and needles to find out about the [effectiveness of the] treatment. Everybody’s body reacts differently to chemotherapy. … Thankfully she’s doing pretty good, so they’re going to keep her on a standard risk treatment plan.”

The standard risk treatment plan calls for Danni to continue regular cancer treatments for about the next seven months, or until her leukemia goes into “maintenance mode.”

“She will only have chemo once a month, so at that point if we wanted to go home we could just come out once a month or find another doctor in Montana,” Hill said.

The standard risk treatment plan will span about three total years for Danni and her caregivers.

To help with the family’s medical bills, Hill and her husband started a Go Fund Me page called, “Danni’s leukemia battle fund.” Their goal was to raise $15,000. So far, donors have contributed nearly $9,000 in 29 days.

In addition, local fitness instructor Tamra Stephenson has organized a dance fundraiser for Danni. She became friends with the family after Hill started attending her class at a local gym.

The dance fundraiser will take place on Thursday at 7 p.m. at Scholar Academy, 928 N. 100 East in Tooele.

Although the event will focus on working out through dance fitness routines, Stephenson also wants to help Danni feel special.

“My daughter is a dancer and she will be choreographing a little number to [Danni’s] favorite song, ‘Shake It Off,’ because I want it to be about her,” she said.

Tickets to the fundraiser can be purchased at the door and will cost $10 for adults, $8 for kids or $20 for a family of four. Stephenson will donate 100 percent of the proceeds to the Hill family.

Hill expressed gratitude for the generosity and support her family has received since Danni’s diagnosis.

“I appreciate everyone so much,” she said. “I think our insurance cap is $4,500 this year and I just got a letter saying it’ll go up … next year, but we’ve got enough there to cover probably the next two years, so that’s amazing.”

Hill plans on attending the dance fundraiser Thursday. She’s especially excited because Danni will be healthy enough to go as well.

“She’ll have fun,” Hill said. “She loves working out and dancing and having a good time; I think she’ll really enjoy it.”