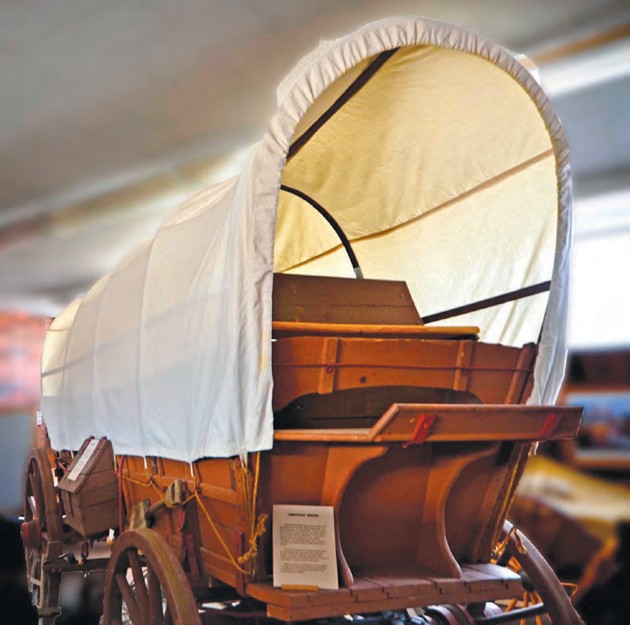 Conestoga Wagons were named after the Conestoga River and the Native American tribe of Lancaster County, Pa. They were first built by German settlers for moving goods to market and measured 18 feet long, 11 feet tall and 4 feet wide. photo courtesy Darrell Smith

Most people have heard the awful but spiritual experiences of the ill-fated Willie and Martin Handcart Companies of 1856 that met so much tragedy and death. All other handcart companies during that five-year period were very successful in getting to Utah quicker and with far less expense than the wagon companies, but what isn’t commonly talked about is that Conestoga Wagons normally accompanied such handcart and wagon companies.

These wagons, the first tractor trailers of the highways, would help carry supplies that the smaller carts and regular wagons couldn’t, like tents large enough to sleep 18 to 20 people and food for companies of 500 people or more. The handcarts were for transporting mostly personal gear and clothing, and travelers were limited to 15 pounds each, plus some equipment and food. Even with those limitations, packed handcarts weighed in at 400 to 500 pounds. Conestoga Wagons hauled the rest of the supplies needed.

Named after the Conestoga River and Native American tribe of Lancaster County, Pa., these huge wagons were first built by German settlers for moving goods to market. Measuring 18 feet long, 11 feet tall and 4 feet wide, these wagons could carry up to eight tons or 16,000 pounds. Six horses, mules or oxen slowly pulled these ponderous wagons along.

The wagons were constructed so that loads would not shift going up and down rough roads. Because of the raised front and back like a boat, they could actually float when caulked with tar. Constructed entirely of hardwood, they were fitted on the outside with water barrels, toolboxes and feed boxes for the laboring animals. Tall, massive iron-rimmed wheels could conquer even the worst surfaces, and white canvas tops soaked in linseed oil kept the freight dry.

A little-known fact is that there was no front seat for the driver to sit and guide the animals. The driver usually walked on the left side of the wagon and turned the animals with a “haw” for left turns and a “gee” for right. He also had a leather strap attached to the front left lead animal if “haw” and “gee” didn’t work.

There was also a board that could be pulled out from the side of the wagon bed for the driver, often called a mule skinner, for him to sit upon. This was not often used as it was called the lazy board. No self-respecting mule skinner wanted that label. Right hand traffic, as we use in driving cars throughout most of the world today, came about because of Conestoga drivers walking or sitting on the left hand side of these wagons. They would roll along on the right side of the trail and pass other wagons by turning left around them where they could see the trail ahead.

The coming of the railroad ended regular usage of the Conestoga Wagons as a hauler. After the Civil War, they were no longer manufactured.

Most covered wagons were basically farm wagons with a canvas top stretched over wooden hoops attached to the wagon sides. These were not nearly as large as the prairie schooners, which was another name these Conestoga Wagons were known by. Even wagon companies normally had a prairie schooner or two to handle the heavier essentials.

The centerpiece of the Tooele Pioneer Museum is a full-sized Conestoga Wagon. Many are impressed by its bulk and craftsmanship. The museum is managed by the Settlement Canyon Chapter of the Sons of Utah Pioneers and is located at 50 E. Vine St. next to the building that houses the Daughters of Utah Pioneers Museum. There is a connecting hallway and staircase between these two unique museums.

Anyone wishing to see the Conestoga Wagon and hundreds of other early pioneer and Native American artifacts of Tooele County may do so by calling 882-1902 for an appointment. The museum’s regular hours start on Memorial Day and continue through September every Friday and Saturday from 10 a.m. to 4 p.m.

Darrell Smith volunteers time as the publicity director of the Sons of Utah Pioneers Settlement Canyon Chapter. He also works as a docent at the Tooele Pioneer Museum. Smith can be reached at smithdar@q.com.