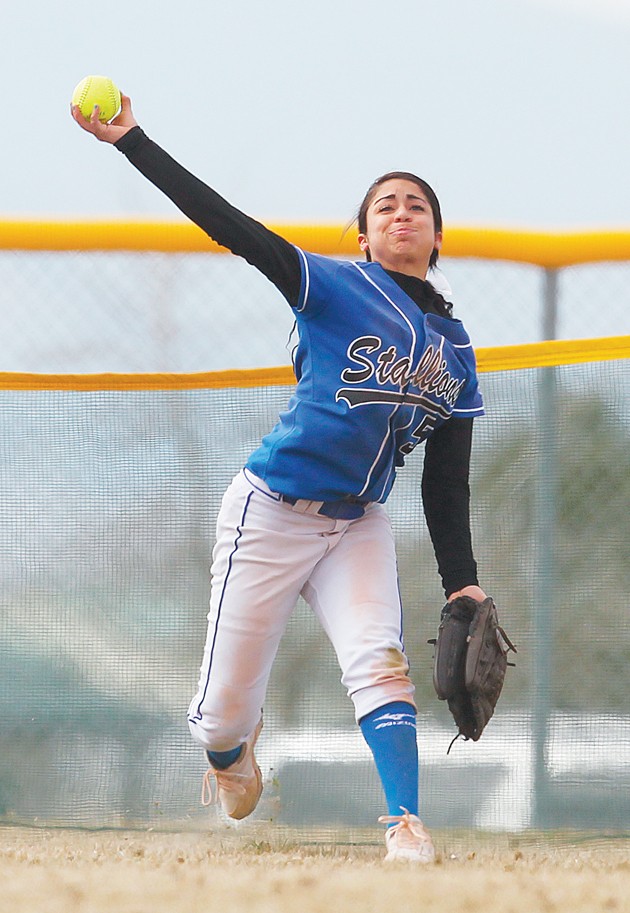 Stansbury High School’s Janessa Bassett (5) throws the ball to the infield Monday against Wasatch. Bassett went 2-for-3 with an RBI, a triple and two runs scored in the win against the Wasps.

The Stansbury Stallions recorded yet another mercy rule victory after beating the Wasatch Wasps 11-1.

Junior pitcher Beth Chipman mowed down the Wasatch hitters in her five innings of work before the game ended on the 10-run rule. She also did damage with a bat in her hands, going 1-for-1 with two RBIs, two walks and a double.

“My curve ball was really good today,” Chipman said. “I just visualized where I wanted it to go.”

Chipman hurried through the first four innings by forcing flyouts and groundouts. She struck out several batters, but that’s not the game she focuses on.

“You can’t have a good pitcher without a good team to back you up,” Chipman said. “I really trust my infieders and my outfielders.”

Stansbury coach Bridget Clinton said Chipman’s ability to get hitters out by relying on her teammates is her best attribute.

“She’s not an overpowering pitcher, but she changes speeds a lot, gets ahead in the count, throws her pitches and hits her locations,” Clinton said. “Our defense gets the groundballs. She’s not a power pitcher, but you don’t have to be as long as you can get the outs when you need to and your defense makes the plays behind you.”

Chipman’s efforts at the plate don’t go unnoticed either.

“At the plate she always has really great at-bats and puts the ball in play,” Clinton said. “She comes up with those clutch hits when there are runners on.”

Her first three at-bats went sacrifice fly, walk and walk, so her fourth at-bat ended up being her only official at-bat. And it was a big one in the bottom of the fifth inning with the Stallions leading the Wasps 8-1. Lindsay Guymon stood on third base and scored on an RBI double by Chipman. That put the Stallions just two runs away from finishing the game with the 10-run rule.

Senior right fielder Katelyn Robinson went 0-for-3 in her first three at-bats, but when the Stallions needed her, she came through. Robinson smacked the ball to left field, and Chipman scored. Robinson ended up on second base with a double. Senior third baseman Karlee Manzione tallied the walk-off base hit in the next at-bat, as Robinson came home for the 11th run.

Junior Janessa Bassett started the scoring right away when she tripled in the bottom of the first inning. Chipman came up to bat next and her sacrifice fly scored Bassett. With the Stallions leading 2-0 in the third inning, freshman Anjalee Batchelor, senior Jocelyn Kaufmann and senior Elise Sutherland went back to back to back to make the score 7-0. Batchelor’s base hit scored Bassett and a pinch-running Qyncee Horrocks. Kaufmann doubled to score Manzione and move Batchelor to third. Finally, Sutherland’s double scored Batchelor and Kaufmann, and Sutherland was thrown out trying to stretch her double into a triple.

The Stallions’ win against Wasatch is just another tally mark in their 9-1 overall record to start the season. They also have two region wins as part of that record, including a weekend win at the Bear River Bears — the defending state 3A champions. Robinson belted a home run to help propel the Stallions to a 7-4 win against the Bears on Friday. The Bears also committed four errors in the contest.

“We’re confident,” Chipman said. “We’re playing great. I feel good about it, and everyone else feels good about it.”

The Stallions take on Alta at 3:30 p.m. today in a rematch from a game played in St. George on March 16. The Stallions won that game 15-1. They then take on Syracuse in the first ever meeting between the two teams. That game takes place on Thursday at 3:30 p.m.