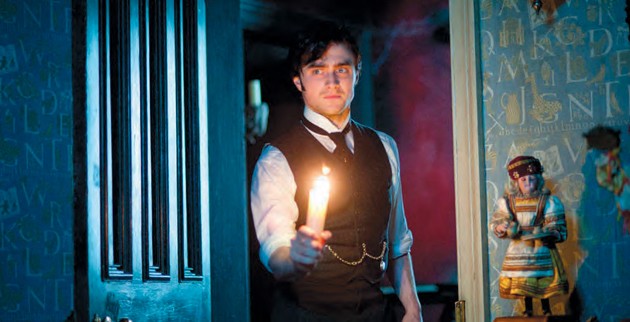 Daniel Radcliffe, as Arthur Kipps, investigates strange activity in a haunted house in “The Woman in Black.” Radcliffe gives a passable performance but doesn’t get the chance to truly prove his acting skills in the film, which opens Friday. courtesy of CBS Films Inc.

For many fans of the Harry Potter series, “The Woman in Black” is a big deal.

This is the first major film for Hogwarts-grad Daniel Radcliffe, and fans are eager to see if he is going to merely diminish the star of a done-and-over-with multi-billion dollar franchise, or whether he has the acting chops to be a true A-list star.

Unfortunately, Radcliffe’s role as Arthur Kipps, a British lawyer in the early 20th century, is a workaday role and doesn’t give Radcliffe room to truly shine. However, the movie is enjoyable fright fare, and lovers of the horror genre should find plenty to appreciate.

The film joins Kipps several years into a grief-torn parenthood, finding out that his wife died giving birth to his son Joseph, who is now 4 or 5 years old. To prove he is still valuable to the law firm he works for, Kipps takes an unenviable assignment, traveling alone to a remote coastal town where he must sift through a great deal of paperwork at the home of a recently-deceased woman. Upon arriving, he finds that the townsfolk —for reasons of their own — don’t want him there, but he goes about his work in the empty house regardless, discovering quickly that the house is indeed haunted.

Already, red flags should be popping up: A remote town that doesn’t like outsiders, a deserted house with death in its past — there is even a dog subtly planted in the story so it can bark at “nothing.” This is “Horror Story 101” material.

Nearly half the movie seemed to consist of Harry — I mean Arthur Kipp — lurking around the house, following strange noises and curious sightings, nearly making audience members cry, “Don’t go in there!” However, “The Women in Black” is a decently written and decently acted horror film that brings the expected intensity and jumpy moments everyone hopes for going in. It’s a fair addition to the classic genre of the haunted house, never letting itself topple into the realm of the ridiculous like many modern fright flicks. With no big-name stars attached, other than Radcliffe, and a brief but notable performance by recent Oscar-nominee Janet McTeer (Best Supporting Actress for “Albert Nobbs”), this British horror flick is clean, uncomplicated and effective.

As for Radcliffe’s true acting abilities, though, we’ll have to wait and see.

Inspired by a true story and starring John Krasinski, Drew Barrymore and Ted Dansen, “Big Miracle” follows the collaborative effort by journalists, environmentalists and locals to free a family of gray whales trapped in the ice near Barrow, Alaska, America’s northernmost city. Politicians, the National Guard and even Soviets scramble to save the whales with various motivations as the nation follows the tale of the whales intently.

John Krasinski is as engaging as ever, albeit portraying an exact replica of his persona on TV’s “The Office,” and Ted Dansen is a refreshing face to see. The film, however, is slow moving, jumping quickly into the main story then taking a great deal of time going nowhere before overstaying its welcome during a 123- minute running time. It also seemed as though director Ken Kwapis was indecisive about whether there should be a love story or not, which causes the story to fall flat at the end with a sappy conclusion. The script, although laden with lightweight wit, fails to produce any big laughs.

Overall, it is a film that teeters on the edge of cliché, sometimes taking a brief a spill, but maintaining balance enough that there remain very few bad things to say about it — but not much good either. Not quite living up to its title, “Big Miracle” provides medium-sized entertainment at best.

Man on a Ledge

Sam Worthington, Elizabeth Banks and Ed Harris star in this thriller about a man desperate to prove his innocence. When Nick Cassidy (Worthington) escapes from prison after being framed for a crime he did not commit, he carries out a complex plan that involves stepping out onto the ledge of a hotel building to distract the police and public while his brother (Jamie Bell) and brother’s girlfriend (Genesis Rodriguez) steal a valuable diamond from the villainous David Englander (Harris) — proving that Cassidy never stole it in the first place. Meanwhile, police psychologist Lydia Mercer (Banks) tries to talk him down, slowly realizing there is more to the man on the ledge than a suicide attempt.

Something has to be said about Worthington, who is arguably the most unexciting actor on Hollywood’s A-list. His character is merely a slight variation of his persona in “Avatar” and “Clash of the Titans,” toting nothing but intense facial expressions hinting at inner torment, and his attempts at real acting are laughable. Also interesting is the casting of Rodriguez — although she admittedly has good chemistry with Bell — who comes across as a less expensive casting option than Megan Fox.

The story, although forgettable, contains a fair amount of excitement. The ledge aspect has exhilarating moments, although they should have played it up a bit more — the spotty camera work sometimes made it feel as though the ledge was nine feet off the ground. Banks also turns in decent work and provides the only character with reasonable believability. All in all, “Man on a Ledge” delivers the intensity one expects going in, but is a forgettable, cheaper version of better action thrillers.

One for the Money

This movie, which is in essence a vehicle for “Grey’s Anatomy” star Katherine Heigl, is an adaptation of a novel of the same name. It follows a broke Jersey woman, Stephanie Plum, as she secures a job as a bail enforcement agent at a bail bonds business owned by her cousin Vinnie. With no training, permits or even a gun, she gets herself in deep in the local crime scene as she hunts down a wanted cop, Joe Morelli, who just so happens to be a guy who broke her heart in high school.

Katherine Heigl is awful in this picture, but even without her distracting fake tan and stereotypical “insecure hottie” persona, the film takes no time in setting up its characters, resorting to overcharacterization at its worst with a forgettable array of supporting players who I believe were meant to be charming. Not only that, but it teeters on the offensive side when it portrays certain matters of assault, rape and murder without even a hint of sensitivity. Unnecessary narration and characters — particularly Ranger portrayed by Daniel Sunjata as an elite bounty hunter who is strangely available whenever Stephanie is in trouble — serve only as plot manipulation at its most obvious.

The premise itself is far from believable, as are the many plot turns that left fellow audience members saying out loud to themselves, “really?” An awful movie released during a month that is notorious for studio refuse, “One for the Money” leaves us hoping that Heigl, who also executive produced the film, doesn’t kid herself into adapting the novel’s sequel, “Two for the Dough.” robbypoff@tooeletranscript.com